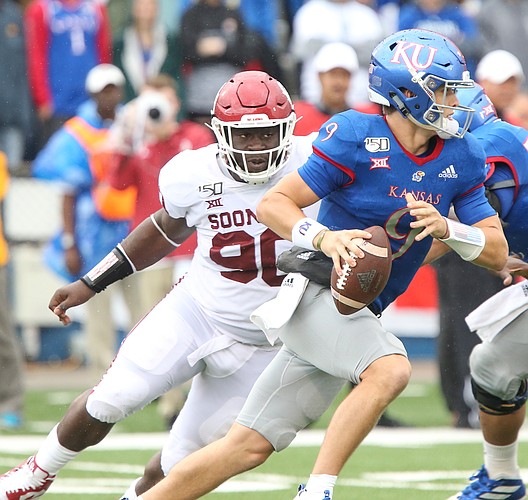 The play call was good. The pass was perfect. But the catch was not made.

Kansas rolled the dice on 4th-and-2 in the second quarter of a 45-20 loss to No. 6 Oklahoma this past weekend.

KU quarterback Carter Stanley motioned tight end James Sosinski to the left side of the line. Stanley took a three-step drop and fired it to Sosinski, who ran toward the left sideline along the first down marker.

Sosinski couldn’t haul in the crucial catch, and the Jayhawks turned it over on downs. Oklahoma scored seven plays later to take a 14-7 lead and never looked back after that.

“I’ve seen him make that catch hundreds of times,” Stanley said. “I would have made that same throw, same decision 100 times over again. It was unfortunate, but I know he will make up for it in the future.”

But it exemplified the oddity of KU’s fourth down struggles through the first half of the 2019 season.

After an 0-for-2 effort on fourth down against the Sooners, the Jayhawks have now failed to convert on all seven of their fourth down attempts through six weeks. It is the most such attempts in college football without a successful conversion.

Sure, Kansas had its fair share of miscues that have ultimately led to whiffing on all seven tries on fourth down. At the same time, though, there is an element of bad luck that is involved in this many missed opportunities. And that is why KU head coach Les Miles wasn’t too concerned by that particular stat after the game.

“I can think of a couple drops,” Miles said. “I think that this is a team that will learn how to catch fourth downs. It's fourth down. It's a little bit more pressure situation, but I think our guys will handle that.”

It wasn’t a drop that kept Kansas from converting its second fourth down attempt against OU, however. On 4th-and-1 from Oklahoma’s 39-yard line, KU lined up in a jumbo formation and appeared poised for a short run attempt.

Stanley faked the handoff to freshman running back Velton Gardner, and tight end Jack Luavasa was wide open on a seam route over the middle of the field. Stanley simply overthrew his man on what was otherwise a solid outing by KU’s signal caller.

Still, that has been the theme of these failed fourth down attempts all year. KU went 0-for-2 on fourth down against Indiana State, though one shouldn’t technically count since the team was trying to run out the clock to finish off a 24-17 win. The other failed conversion came on 4th-and-2 in the third quarter, in which Stanley was hit with a sack/fumble by the Sycamores.

The Jayhawks were also 0-for-3 on fourth down in a 12-7 loss to Coastal Carolina in Week 2, which featured the most memorable failed conversion of the year. Kansas called two timeouts, while Coastal Carolina called one, before the hosts ultimately were stopped on 4th-and-4.

Pooka Williams was the intended target on that play, though he was forced out of action via contact from the defender. Stanley was forced to scramble, and came up well short of the first down marker.

The Jayhawks also came up short on fourth down one drive earlier. They attempted a reverse with Andrew Parchment, who was ultimately stuffed for no gain on 4th-and-1. On the final drive against Coastal Carolina, KU turned it over on downs on 4th-and-3 following a 1-yard run by Williams to end the game.

Since there is no common theme, there might not be an easy solution to fix these fourth down failures. But perhaps it will all even itself out during the second half of the season.

Getting certain players heavily involved in the offense will result in those players being comfortable when the chips are down. 6 catches in 6 games is not enough to be comfortable in the offense. IMO there are three players that need attention, RB, WR, and TE. Pooka should touch the ball 20+ a game, Parchment-10 targets a game, and Sosinski - 6 to 8 targets a game.

Sosinski is a big target and we should be hitting him in motion up and across the middle.

On the pass to Luavasa, if the defender is in the middle and no one is outside wouldn’t it make sense to run away from the defender, to the outside and give a better window to throw to?

Nope. You make the throw when it presents itself, because a split second later, the pass may not be there. No time to run to the left or right a few paces to make a longer throw when the safety very well may recover in that time.

Players need to make plays. The best designed play in the world won't be successful unless the players involved execute as a unit and everyone carries out their assignment. Same players, different coaches, same results. The first will need to change for KU football to get out of the basement.