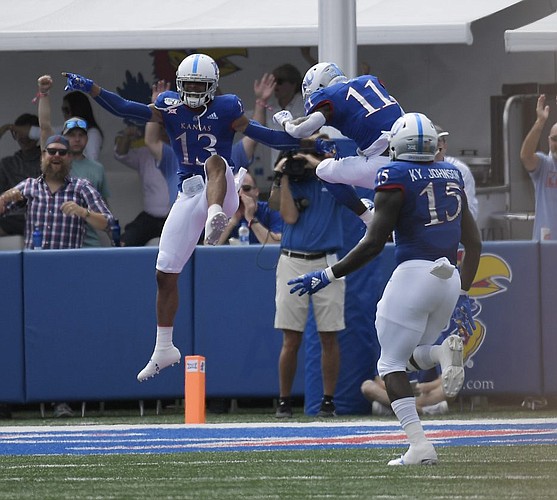 Considering Tom Herman’s history as a favorite compared to an underdog, this might be a surprising answer for best bet. But Texas should be able to handle this one against a West Virginia team that could have easily lost to Kansas just two weeks ago. The Longhorns are averaging 41.8 points per game, and should be able to win by double-digits. If I say it enough, I'll speak it into existence.

You might be asking yourself if I have memory loss. I don’t believe so, because I do vividly remember whiffing when I picked UMass as a long shot against Coastal Carolina just two weeks ago. I’m back on the Minutemen, who should be able to stay within four touchdowns against the Panthers. FIU has given up over 30 points per game during its 1-3 start, so even UMass should be able to score enough to cover this lofty spread.

I’ve been monitoring my weather app for KU’s Week 6 matchup with Oklahoma this week, but obviously there will be similar conditions in Manhattan. As windy as it is supposed to be Saturday, I like the under in the game featuring Kansas State and Baylor. It also helps that both programs average less than 70 plays per game, so this should be a slower-paced contest.

Those that have followed this blog over the last few weeks knew this was coming. I’m, once again, fading Bo Nix and company. Admittedly, this hasn’t worked in my favor, especially when he went bonkers last week. But Florida’s defense will be a real test for the true freshman signal caller, and I am actually taking the moneyline for the hosts. Of note, SP+ projects Florida to win by a 28-25 margin.

Some NFL action: Steelers +3.5 at Ravens

As a Ravens fan, this actually pains me. But this might be the best NFL bet of the weekend.

The Steelers are getting more than a field goal at home, and I legitimately think they will win this game. Baltimore’s defense remains a concern after giving up 73 combined points to Cleveland and Kansas City over the last two weeks.

As wildly unpredictable as the NFL is, it is only fitting that the Steelers win this one after people were anointing the Ravens as AFC North champs just two weeks ago. I’m not actually putting money on this game for personal reasons, but I wouldn’t blame anyone for taking the points in this one.