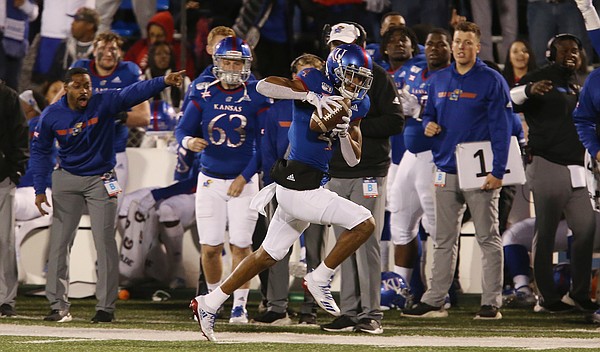 Kansas wide receiver Andrew Parchment (4) runs close along the sidelines after a catch and rans for a second-half touchdown in the Jayhawks 37-34 in Saturday. by Mike Yoder

This year’s Sunflower Showdown has a different feel to it, and the early betting line helps give us an idea why.

As of Monday afternoon, Kansas was considered a five-point underdog on FanDuel’s Sportsbook. The line has really bounced around between 4.5-6 points, from what I have seen at multiple sportsbooks. Even a casual bettor would understand that there is something different about that line.

The betting line hasn’t given Kansas this much respect in the Sunflower Showdown in nearly 10 years. According to Odds Shark, the Jayhawks should be less than a 10-point underdog against the Wildcats for the first time since 2010. KU, which was just a three-point underdog under Turner Gill, was handed a 59-7 drubbing back then.

Since then, Kansas has been an underdog by 20-or-more points in five of the eight meetings with Kansas State. Last season, KU was a 10-point underdog before a 21-17 loss to K-State in Manhattan. The Jayhawks have actually covered the spread in three consecutive games against the Wildcats.

None of that matters for this week’s rivalry matchup, though it certainly shows why KU fans might feel more confident than in previous years.

Ending a 10-game losing skid in this series will still be a tough task for the Jayhawks. Kansas State is coming off a 48-41 win over Oklahoma, which earned the team a No. 22 ranking in this week’s AP Poll. The Wildcats (5-2, 2-2 Big 12) have won two games in a row since their bye week.

KU has also been much better since the bye week, which was when the team promoted Brent Dearmon to offensive coordinator. The Jayhawks (3-5, 1-4 Big 12) nearly knocked off Texas and are coming off a 37-34 win over Texas Tech. Kansas has covered the spread in each of its last three games.

It is still too early in the week for me to commit to a pick in this game, but this is certainly a winnable game for Kansas. The Wildcats are actually allowing 6.39 yards per play, which is 110th in the nation. For comparison, Texas is giving up 6.42 yards per play and ranks 112th in the country.

So the Jayhawks should be able to move the ball this week, as has been the case since Dearmon took over play calling duties.

The key for Kansas will be avoiding a slow start like the 17-0 deficit it faced against Texas Tech this past weekend. Kansas State wants to get out to an early lead and then control the clock. Only four teams in all of college football have a better average time of possession than K-State.

All of that is obviously easier said than done, but it could ultimately decide if the Jayhawks can notch their second win in a row.

Lines via FanDuel's Sportsbook as of Monday afternoon. Sign up today using this special promotion.

It would certainly help the KU defense if Dru Prox could come back. Any idea when that could happen? (Or is he out for the season? I forgot.)

I don’t think Dru has been ruled out of anything yet. It is great that even the younger players are getting experience and stepping up.

The way that KU has hit big plays and KSU has been run heavy does not worry me from a TofP perspective. Stopping the run does worry me. Need to play strong.

That is my biggest concern as well. K-State's biggest strength happens to be our biggest weakness. I think we will need a couple of lucky breaks to get this W.

You know on the other side of the ball they gonna stuff the box to shut Pooka down - -even though Carter has done really well the last couple of weeks - - they gonna make him prove it again, - -we got to keep Herbert out of our backfield for TFL'S - -let's do this - - -ROCK CHALK ALL DAY LONG BABY

Even though nothing has came out official , the vibe I've been getting is that I think Dru is done for the year - again nothing been official just hearing around different places - hope not

Dru Prox can still redshirt since he appeared in only 4 games. I think they will leave the shirt on him since others have stepped up in at linebacker.

The guys who establish the betting line aren’t interested in football. All they are interested in is attracting money on both sides of the spread.

Cora - The 4 game distinction is accurate but I think Dru would need a medical redshirt to retain the year of eligibility, because I believe he has already used a redshirt.