Getting to know: Texas Tech football 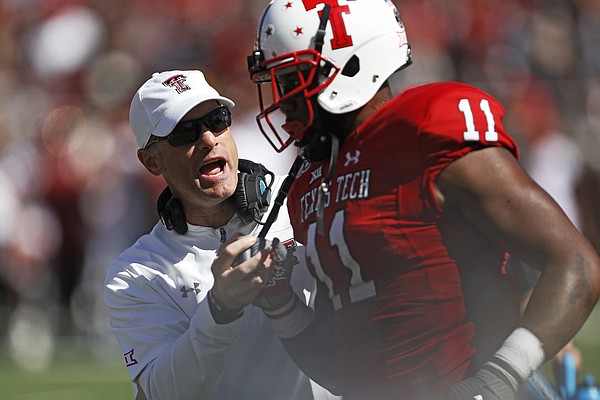 Kansas has had a hard time maintaining momentum this season.

Following the win over Indiana State in the season opener, KU suffered a 12-7 loss to Coastal Carolina in Week 2. The Jayhawks then scored 48 points in a lopsided road win over Boston College before falling to West Virginia in the Big 12 opener.

Now, the Jayhawks are coming off a 50-48 road loss to Texas, but it was still an impressive feat. They were considered three-touchdown underdogs in that game, which ultimately came down to the final play. It was a strong debut by Brent Dearmon, who was promoted to offensive coordinator during the bye week.

But now the pressure is on. KU (2-5, 0-4 Big 12) is expected to compete in a homecoming tilt with Texas Tech, and anything short of that would be a disappointment. The Red Raiders (3-4, 1-3) are favored by six points, though the line has been all the way down to three points in some places this week.

KU has performed well when counted out, but hasn’t had that same level of success when the betting line is this low. Will that trend continue or will the Jayhawks have a shot at their first conference win of the year? Let’s get to know the Red Raiders to see how this game might play out.

Quarterback — Jett Duffey has recorded a pair of 350-yard passing performances since being named Texas Tech’s starter prior to the Oklahoma State game. It marks the first time a Red Raider quarterback has thrown for at least 350 yards in consecutive Big 12 games since Patrick Mahomes did so against both Texas and Oklahoma State in 2016.

Running backs — Redshirt freshman SaRodorick Thompson ran for a career-high 153 yards and two touchdowns on the ground against Baylor. Thompson has led the Red Raiders in rushing in five games, and has a team-high 469 yards and seven touchdowns.

Receivers — Junior T.J. Vasher, who is 6-foot-6, has hauled in 16 receiving touchdowns in his career, which is six shy of entering the Texas Tech career record book. He is the leading receivers in catches, yards and touchdowns for the Red Raiders. Vasher has a reception in 23 straight games. Redshirt freshman Erik Ezukanama netted seven catches against Iowa State.

Offensive line — Senior left tackle Terence Steele leads the team with 42 career starts, and has even filled in at both tackle positions and right guard this season. Left guard Madison Akamnonu has started all seven games at left guard, while Dawson Deaton has started all seven contests at center.

Defensive line — Junior defensive end Eli Howard has been in on a sack in three of four Big 12 games. The Red Raiders have employed both Nick McCann and Jaylon Hutchings at nose tackle this season. Senior defensive tackle Broderick Washington leads the defensive line in tackles.

Linebackers — Senior Jordyn Brooks enters this weekend among the national leaders in several defensive categories, ranking fourth in tackles for a loss per game (1.9), sixth in total tackles per game (11.1) and 10th in solo tackles per game (6.1). Riko Jeffers, who is third on the team in tackles with 38, is the other starting linebacker.

Secondary — The move from cornerback back to safety has paid off for senior Douglas Coleman III, who leads the FBS with six interceptions this season, all of which have come in the past five games. Zech McPherson, who is a Penn State transfer, has started all seven games at corner and ranks fourth on the team in tackles.

SPECIAL TEAMS — Redshirt freshman Trey Wolff is the first Red Raider kicker dating back to 2000 that was successful on his first seven career field goal attempts. Punter Austin McNamara leads all FBS freshmen in punting average at 44.8 yards per punt.

VEGAS SAYS… This line got all the way down to three points earlier this week, but it has slowly climbed back up in Texas Tech’s favor. As of Saturday morning, the Red Raiders were favored by six points via FanDuel’s Sportsbook.

This is a tough game to predict, because Kansas hasn’t performed well in these situations this season. Kansas is 3-0 against the spread this season as a three-touchdown underdog or more, which includes last week’s narrow loss at Texas. When the line is two touchdowns or less, however, KU is actually 0-4 ATS.

I’m choosing to believe that the Brent Dearmon factor is a real thing, and will help KU maintain momentum. I took this line when it was down to three points in this week’s Pick 6, and I’m more than happy to do it with three more points. I think Kansas wins this game outright.