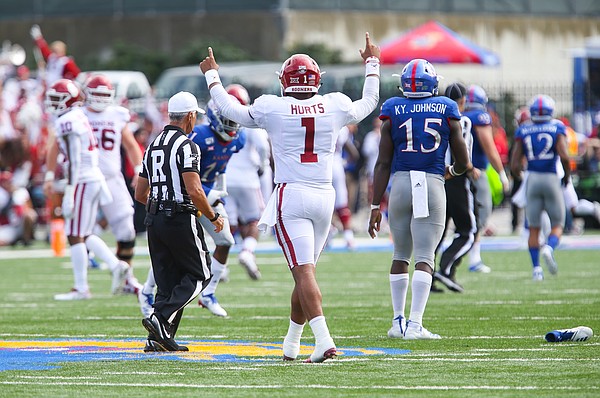 Oklahoma quarterback Jalen Hurts (1) celebrates a touchdown by the Sooners during the fourth quarter on Saturday, Oct. 5, 2019 at Memorial Stadium. by Nick Krug

I think we are going to look back at Kansas State's win over Mississippi State, and realize that neither of those teams are that good. I’ll take a touchdown against a MSU defense giving up 230 passing yards in four of five games this season. The Volunteers (1-4) are coming off a 43-14 loss to Georgia, so they could be more desperate for a win in this one.

Underdog of the week: Arizona (+6) vs. Washington

Washington is coming off a 23-13 loss at Stanford to drop to 4-2 on the season, while Arizona (4-1) is on a four-game win streak following a 35-30 victory at Colorado last weekend. The Wildcats are putting up 37.2 points and 539.2 yards per game, so I expect this offense behind Khalil Tate to make this game.

Over of the week: Washington State at Arizona State (Over 59.5)

Under of the week: Maryland at Purdue (Under 53.5)

Both teams will be without their respective starting quarterback, meaning the under on the total was the easiest bet of the week. Purdue has been hit with a number of injuries, and I don’t expect this banged-up offense to score much. Maryland, which is coming off its first Big Ten road win since Sept. 30, 2017, is averaging 40 rush attempts per game this season.

This one seems too good to be true, which means I fully expect Vegas to get the best of me on this one. I do think this is going to be a great game, and the Vikings could absolutely win this one. But I would have expected the Eagles to be favored, and I’m more than willing to take the points since they should bottle up the Vikings’ run game.

Lines via FanDuel's Sportsbook as of Tuesday afternoon. Sign up today using this special promotion.