Getting to know: Baylor football 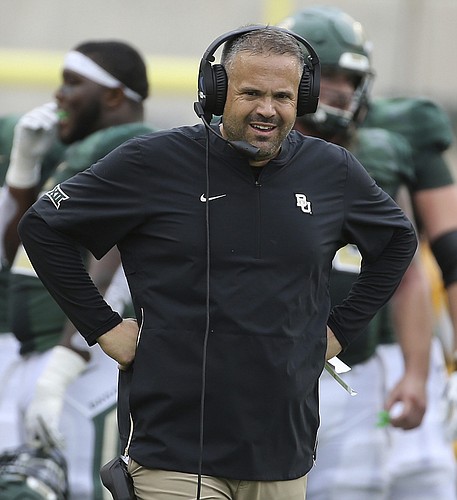 Baylor head coach Matt Rhule looks to an official during the first half of an NCAA college football game against Kansas, Saturday, Sept. 22, 2018, in Waco, Texas.

On the surface, there isn’t much at stake when Baylor and Kansas square off in the final weekend of the 2019 regular season.

Baylor (10-1, 7-1 Big 12) already has its ticket punched to the Big 12 championship game, while KU’s bowl hopes were shattered well before this weekend. Still, the Jayhawks would like to send their seniors out with a memorable performance and the Bears must avoid an upset to help their postseason fate.

In addition, both teams can accomplish a significant feat with a win on Saturday. Kansas (3-8, 1-7 Big 12) could win more than three games in a season for the first team since 2009. Baylor, meanwhile, would match a program for wins in a season with a victory over Kansas.

Yet this matchup hasn’t been particularly close as of late. The Bears have won nine straight meetings with KU, including the last four trips to Lawrence. BU has outscored the Jayhawks, 425-109, since 2010 with an average margin of victory of 35 points per game.

Based off the betting line, the Bears shouldn’t have much trouble in their latest tilt with the Jayhawks. Baylor is considered a 14-point favorite via FanDuel’s Sportsbook as of Friday afternoon.

Running backs — Nine different players have scored a rushing touchdown for Baylor in 2019. Junior running back John Lovett (588 yards, 5 touchdowns) and senior JaMycal Hasty (510 yards, 4 touchdowns) have shouldered much of the rushing attack for the Bears this season. TCU is the only other team in the Big 12 with a pair of 500-yard runners this year.

Receivers — Denzel Mims is the only FBS player with at least eight receiving touchdowns in each of the last three seasons. Mims currently ranks sixth in Baylor history with 177 career receptions. He has 27 scores in his career, a mark that ranks fifth in program history. This season, Mims has 57 catches for 892 yards and 11 touchdowns.

Offensive line — No Baylor lineman has started every game this season. Blake Bedier, Baylor’s starting right tackle, has started in all but one game to lead the way. Prior to his time at BU, Bedier played at Snow College in Ephraim, Utah. He was a second team JUCO All-American and the No. 2 JUCO player in Utah after not even playing football in high school.

Defensive line — Baylor’s 38 sacks in 11 games is the second-largest season sack total in program history, trailing a team-record mark of 40 in 1992. Junior defensive lineman James Lynch ranks first in the Big 12 and eighth nationally with 10.5 sacks in 2019. He is third in the conference with 14.5 tackles for loss, a total that ranks 21st nationally

Linebackers — Sophomore linebacker Terrel Bernard has stepped up following the loss of Clay Johnston to a season-ending knee injury in the victory over Texas Tech. Since moving to middle linebacker, Bernard has averaged 13 tackles per game over the last four contests with 4.0 sacks, 7.0 TFL, one fumble recovery and one interception.

Secondary — Baylor’s secondary has shown tremendous growth in three seasons under Matt Rhule. The Bears are first in the Big 12 with a +7 turnover margin through 11 games, after a combined turnover differential of -23 in 2017-18. Grayland Arnold leads the team with five interceptions, which is the most by a BU player since 2016.

SPECIAL TEAMS — The Bears have blocked nine kicks in the last 16 games. They actually have 14 blocks since the start of 2017, a mark that ranks second nationally.

FUN FACT — Baylor is the first Power 5 program to win 10 games within two seasons of winning one game or less. An 11th victory on the season would match the program record for wins in a season, which was set in 2013 and 2014.

VEGAS SAYS… The spread has stayed the same all week, as Baylor is considered a 14-point favorite on most sportsbooks. This number seems low, considering where things were just a week ago. Baylor beat Texas by 14 and KU was about a 24-point underdog against Iowa State.

Baylor has only won three Big 12 games by at least two touchdowns this year, but I’d guess that marks improves to four following this weekend.