Getting to know: Dayton basketball 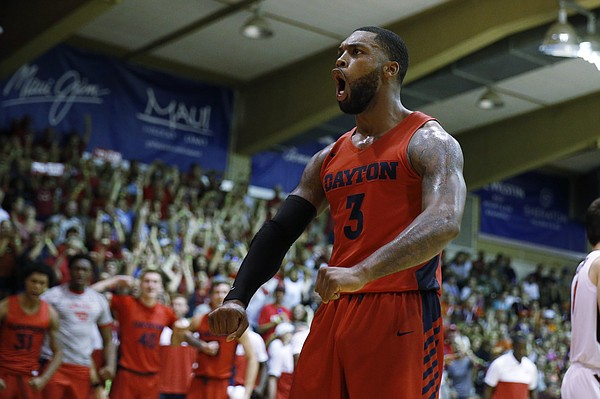 It might not be Michigan State, but No. 4 Kansas will still have a battle in the championship game of the Maui Invitational.

Unbeaten Dayton (5-0) is slated to face KU (5-1) following wins over Georgia and Virginia Tech to reach the title game.

Dayton made its last 10 shots to pull away in Tuesday’s semifinal win over Virginia Tech. Obi Toppin scored 24 points, Rodney Chatman and Trey Landers each scored 13, and Ryan Mikesell added 10.

This is the 24th time the Flyers have reached the championship game of an in-season tournament. Dayton has won the title in four of those, including the 2003 Maui Invitational. Kansas, meanwhile, will be playing in its third-straight Maui Invitational title game and its fourth overall. KU has gone 2-1 in its previous three title game appearances.

KenPom projects the Jayhawks to win by a 74-71 margin, giving Bill Self’s squad a 61% win probability. Tipoff is slated for 4 p.m. inside the Lahaina Civic Center. 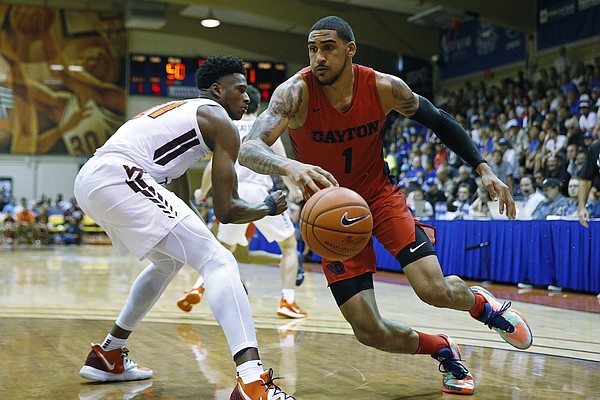 Toppin has received more national attention after leading Dayton the championship game, and for good reason.

This season, Toppin is averaging 24.0 points and 8.2 rebounds per game while shooting 72.3% from the floor. Jay Bilas named Toppin as the No. 1 breakout candidate in the preseason, and the Dayton sophomore was named to multiple watch lists.

In last night’s win over Virginia Tech, Toppin had 24 points with eight rebounds. He shot 10-for-14 from the floor, including a 3-of-5 clip from downtown.

Championship day in Maui. Really looking forward to seeing potential lottery pick Obi Toppin against Kansas' front line. Toppin is such a tough cover at the 5. Can pop you to 3, beat you down the court in transition, space the floor vertically as a roller, or score on the block. pic.twitter.com/JaQV3TBBtq

None by Mike Schmitz 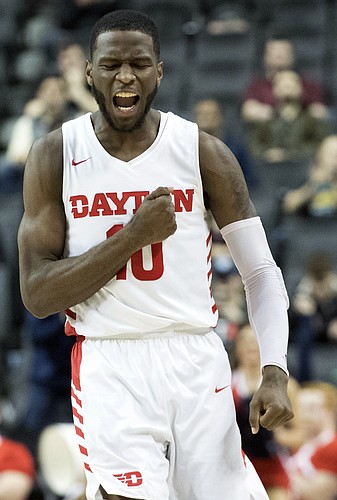 Dayton guard Jalen Crutcher reacts after scoring a 3-point basket during the second half of an NCAA college basketball game against the Saint Louis in the Atlantic 10 Conference tournament, Friday, March 15, 2019, in New York. Saint Louis won 64-55. (AP Photo/Mary Altaffer) by Associated Press

Crutcher is averaging 11.8 points and 6.4 assists per game this season for Dayton.

The Preseason first team All-Atlantic 10 selection has started the last 57 games at point guard for the Flyers. He finished second in the A-10 in assists (5.7) and third in assist/turnover ratio (2.05) as a sophomore last year.

In the win over Georgia, Crutcher has 20 points and three assists during the opening round of the Maui Invitational.

Jalen Crutcher you are NASTY pic.twitter.com/iF9bhrej7b 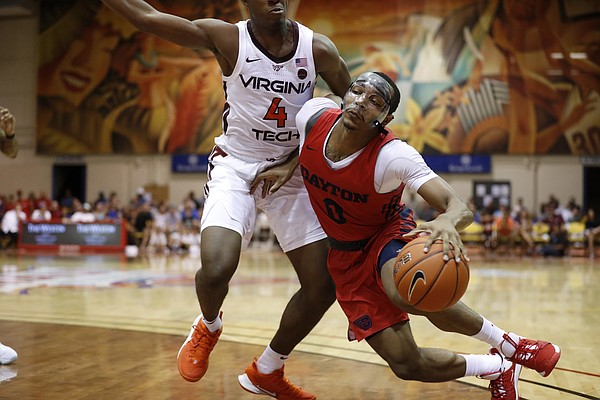 Chatman is averaging 12.2 points and 4.4 assists per game for the Flyers.

He sat out 2018-19 as a NCAA four-year school transfer from UTC, in which he averaged 13.3 points in 29 starts during his sophomore season. Chatman scored 12 points in his Dayton debut during a win over Indiana State.

Chatman’s dad, Rodney, played for George Raveling at USC from 1990-93.

None by David Jablonski 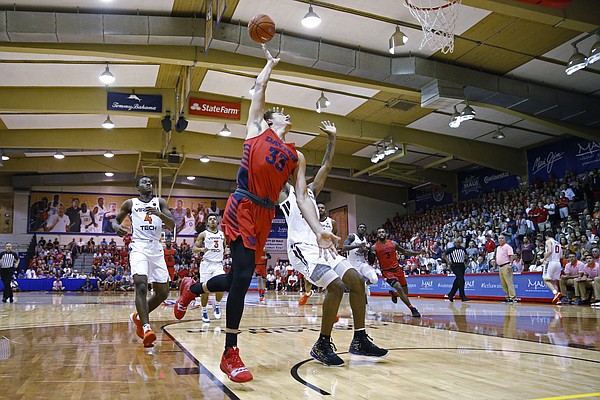 Dayton forward Ryan Mikesell (33) gets fouled as he makes a basket over Virginia Tech during the first half of an NCAA college basketball game Tuesday, Nov. 26, 2019, in Lahaina, Hawaii. (AP Photo/Marco Garcia) by Associated Press

As one of four double-digit scorers for Dayton, Mikesell is averaging 11.0 points and 4.0 rebounds per game.

Mikesell missed all of 2017-18 while rehabbing from surgery on both hips before returning last season. He ended up being in the top four on the team in seven different statistical categories for the Flyers.

None by David Jablonski

ONE THING DAYTON IS GOOD AT

The Flyers have been efficient shooting the ball. According to KenPom, Dayton is shooting 71.1% on 2-point shots so far this season, which ranks first in all of college basketball. Dayton also has an effective field goal rate of 63.9%, another mark that leads the country.

ONE THING DAYTON IS BAD AT

As has been the case all tournament, Kansas won’t have to worry about facing much rim protection today. Dayton has a block rate of 10.5 and an average height that ranks 202nd in the nation, per KenPom.

Kansas is just a 4-point favorite via FanDuel’s Sportsbook as of Wednesday afternoon. That is in between projected scores by KenPom and Torvik. The former has KU winning by a 74-71 margin, while the latter projects Kansas to earn a 78-71 win.

I’m siding with Torvik because of the way the Jayhawks have played defensively this season, which was really the story of last night’s win over BYU. The Flyers may not shoot as well against that defense, especially with it being their third game in three days.

What does KenPom see to determine the 74-41 margin? Dayton looked unstoppable against Virginia Tech. Hawks should stop them, but can't make many mistakes.