Getting to know: BYU basketball 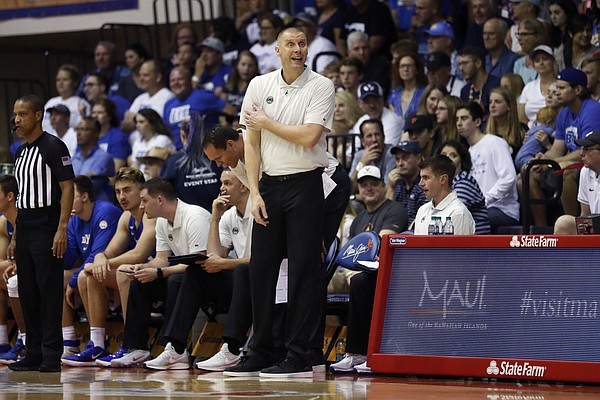 BYU head coach Mark Pope reacts on the sideline during the first half of an NCAA college basketball game against UCLA, Monday, Nov. 25, 2019, in Lahaina, Hawaii. (AP Photo/Marco Garcia) by Associated Press

Getting to the championship game won’t be easy.

Just yesterday, Michigan State proved that advancing in the Maui Invitational is no guarantee when it was upset by Virginia Tech. So while Kansas appears to be the favorite to win this year’s tournament now, it can’t afford to overlook any opponent.

Fortunately for the Jayhawks, that might not be a problem after seeing how BYU ended the first day of the 36th annual Maui Invitational. BYU cruised past UCLA, 78-63, to advance to the semifinals, which is slated to begin at 9:30 p.m. tonight at Lahaina Civic Center in Maui, Hawaii.

Entering this matchup, BYU is ranked No. 68 overall by KenPom. Kansas, for comparison, is considered the eighth-best team in the country. KenPom gives the Cougars a 24% chance of winning tonight, with the Jayhawks winning by a projected score of 75-68.

Kansas and BYU are meeting for the fifth time in men’s basketball and the first time since the 1993 NCAA Tournament, a KU 90-76 win in the second round of the NCAA Tournament in Chicago. KU leads the series 3-1. 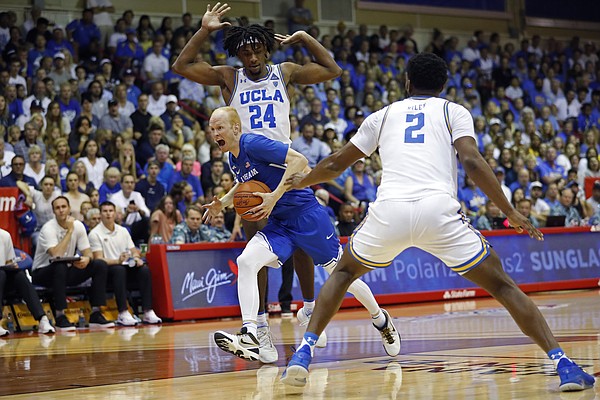 Haws is averaging 12.5 points and 3.7 assists in 32.2 minutes per game during his senior season. He has scored in double figures in all six games for the Cougars.

In addition, Haws has not missed a game in his BYU career and has started every game he has played. His current streak of 107 consecutive starts is the third-longest active streak in the country and the fifth-longest streak in BYU history.

TJ Haws with ICE in his veins! ❄️ 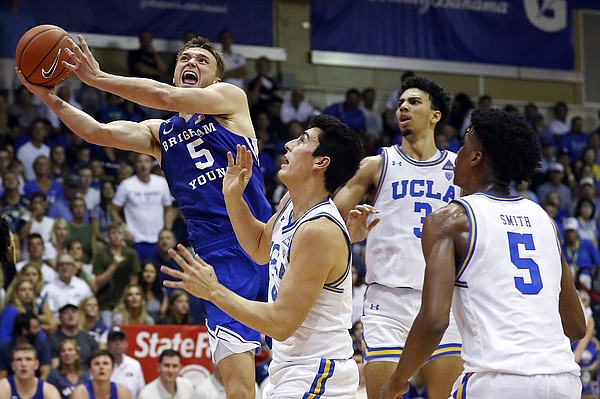 BYU guard Jake Toolson (5) shoots over the UCLA defense during the second half of an NCAA college basketball game, Monday, Nov. 25, 2019, in Lahaina, Hawaii. (AP Photo/Marco Garcia) by Associated Press

Toolson should be a serious challenge for KU’s defense, as he has been a much-needed weapon for BYU since transferring from Utah Valley.

Toolson, who was the 2018-19 WAC Player of the Year, has scored in double figures in five consecutive games. He is averaging 16.7 points per game, shooting 44.7% from the field. He scored a career-best 22 points against Southern Utah earlier this season.

A couple of big wins by @GoUVU with steady play from Jake Toolson help the sophomore earn #WAChoops Men's Player of the Week! Check out some 🎥 highlights 👇 https://t.co/2epgEVdzvI pic.twitter.com/CszXlJMPit

None by The Western Athletic Conference 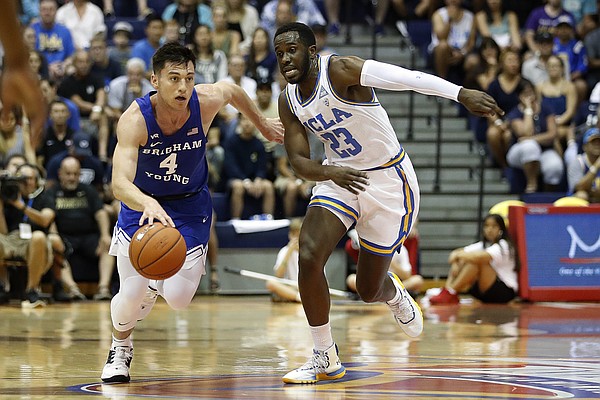 Barcello is one of three players to average in double figures for the Cougars.

Through six games, Barcello is averaging 10.8 points per outing to go along with 2.7 assists and 3.2 rebounds per game. He is averaging 33.5 minutes per contest, shooting 53.1% from the floor this season.

Barcello, who played his previous two seasons for Arizona, was the No. 2 recruit in Arizona and an ESPN Top 100 recruit in the Class of 2017. He has scored in double figures in three different games this year.

None by BYUtv Sports 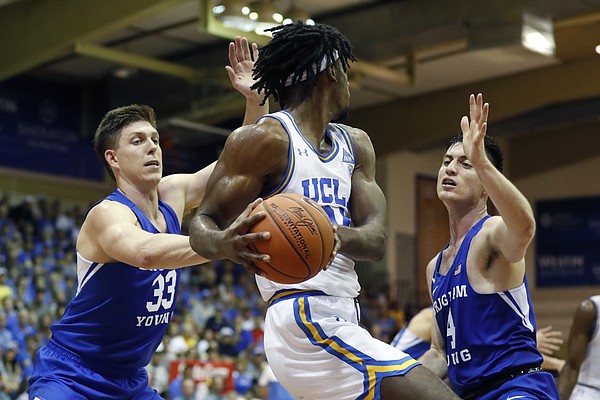 The chances that KU employs a two-big lineup for very long against BYU — if at all — might be pretty slim based on Nixon alone.

Nixon has the ability to stretch opposing defenses out. He has hit a 3-pointer in five of the six games this season and multiple triples on two occasions. Nixon is shooting 47.7% from the field in his career.

This season, Nixon is shooting 43.8% percent from long range on 16 attempts. In Monday’s win over UCLA, Nixon went 2-for-3 from beyond the arc to finish with eight points in 32 minutes of action.

None by BYUtv Sports

The Cougars are coached by Mark Pope who is 4-2 in his first season at BYU and 81-58 in his fifth season overall. BYU is making 8.3 3-point field goals per game on 22.1 attempts per contest.

ONE THING BYU IS GOOD AT

It has been mentioned throughout this blog, but BYU can flat out shoot the rock. The Cougars are hitting 38.1% of their attempts from downtown, which is the 45th-best mark in the country. A total of 35.3% of BYU’s point production has come from 3-pointers through six games.

ONE THING BYU IS BAD AT

BYU isn’t going to have the size to compete with Udoka Azubuike. Well, actually, nobody really does. But the Cougars really won’t be protecting the rim tonight. BYU has a block rate of 2.3%, which is 347th in the nation. For comparison, the average block rate is 9.0 so far this season.

According to FanDuel’s Sportsbook, Kansas is an 11-point favorite over BYU as of Tuesday afternoon. KenPom projects KU to win by 7 points, while Torvik has it as a 10-point win. Either way, those projections would indicate that the spread is a tad too high.

That is where I stand as well. The line dropped down to 10 points for a brief moment Tuesday morning, but I’ll pick BYU to cover at 11+ points. The Cougars can shoot the rock, and KU’s four-guard vs. two-big dilemma might become an even bigger issue after tonight because of that. Kansas should still win this game, but I would predict it to be by single digits.