FanDuel’s odds for No. 4 Kansas vs. BYU 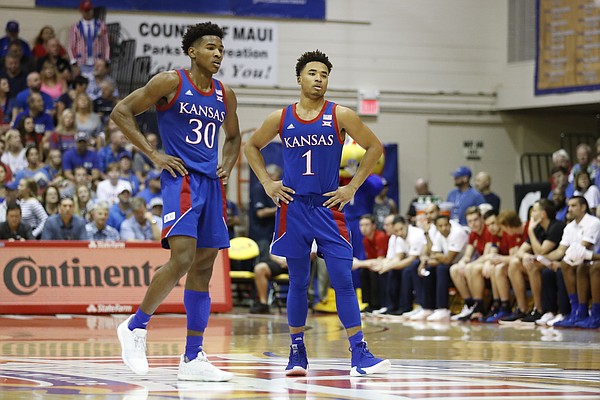 A trip to the championship game is on the line during tonight’s battle between No. 4 Kansas and BYU.

The two teams will square off in the semifinals of the Maui Invitational, which is slated to begin at 9:30 p.m. tonight at Lahaina Civic Center in Maui, Hawaii. The game will be on ESPN, with Dan Shulman (play-by-play) and Jay Bilas (analyst) calling the action. You can also listen to it on the Jayhawk Radio Network.

Kansas, which is coming off a 93-63 win over Chaminade last night, is now 4-1 on the year. BYU improved to 4-2 this season after its 78-63 win against UCLA in the opening round of the Maui Invitational Monday night.

Kansas and BYU are meeting for the fifth time in men’s basketball and the first time since the 1993 NCAA Tournament. The Jayhawks have a 3-1 lead in the all-time series with the Cougars.

The early betting line suggests that Kansas will earn a trip to the championship game of the Maui Invitational. KU is considered an 11-point favorite as of Tuesday morning on FanDuel’s Sportsbook. With that, let’s look at all the latest odds for tonight’s tilt between KU and BYU:

FanDuel’s odds for KU vs. BYU

I’ll have my official prediction in the preview blog, which should be posted later this afternoon. As a result, I’ll throw out another suggestion for this game. I think I actually like the over on BYU’s total points at 67.5, which is obviously a dangerous bet given the fact that KU hasn’t allowed more than 66 points in a game all season.

But it is the second game for Kansas in two days, and BYU is a team that can really shoot the ball. The Cougars are shooting 38.1% from deep through six games, which ranks 45th in the nation. BYU senior guard TJ Haws broke out of a recent slump by scoring 10 of his 15 points over the final 10 minutes in the 15-point win over UCLA last night.

KenPom projects Kansas to win by a 76-68 margin, so this could be a sweat-it-out bet in the end. But if KU is going to trot out the two-big lineup for an extended period of time tonight, I think BYU can take advantage enough for the over on this prop bet to end up hitting.