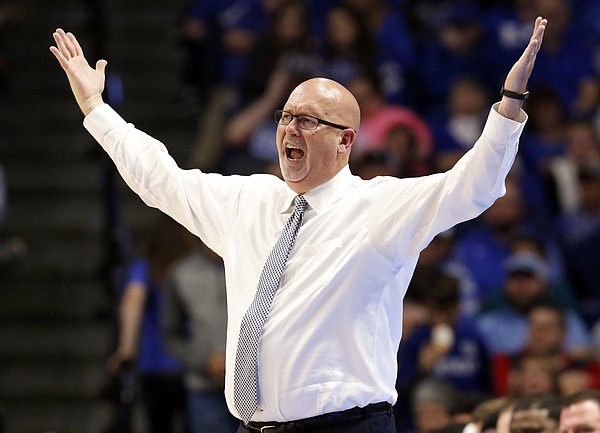 On paper, this should be KU’s toughest test at home at this point in the season.

Kansas led by just four points in an eventual 12-point win over UNC Greensboro about 11 days ago. Entering that game, the Jayhawks were favored by 14.5 points according to most sportsbooks. KU rolled over Monmouth last Friday in its only other home contest during a 2-1 start to the 2019-20 season.

But tonight’s foe, East Tennessee State, should be a true test for No. 4 Kansas. ETSU was picked to win the Southern Conference, one spot ahead of UNC Greensboro. The Buccaneers (3-0) are ranked third nationally in the Collegeinsider.com Mid-Major Top 25 poll.

According to KenPom, ETSU is listed at No. 69 overall in all of college basketball. While KenPom gives the Jayhawks an 86% of winning this game with a projected score of 77-65, this should be a good challenge before the team heads to the 2019 Maui Invitational.

These two teams are meeting for the fourth time in men’s basketball and first since Jan. 4, 1996. KU is 3-0 all-time in this series.

Through three games, Hodges has led ETSU in scoring with an average of 15.3 points per game.

Hodges has scored in double figures in all three games, including a 17-point performance against Winthrop in his last outing. Hodges is also averaging 6.7 rebounds per game following his nine-rebound showing against Winthrop.

It has been a nice jump from his sophomore season, when he averaged 10.3 points per game. For the season, Hodges is 20-of-35 from the floor, including a 2-for-6 clip from beyond the arc.

Junior guard Bo Hodges (@ball_bo) met the media before today's first practice... Bo talked about the Europe trip, his health and the expectations of the team heading into the 2019-2020 season #ETSUTough pic.twitter.com/sqc4hwphL2

Good earned his first start of the year during the team’s win over Winthrop.

The start came after his 24-point performance against UT Martin, in which he hit seven 3-pointers in a single game. Good is averaging 13.0 points per outing this season, shooting 10-for-18 from downtown.

According to KenPom, Good has an effective field goal percentage of 93.3. That mark ranks No. 1 in all of college basketball. Good also averaged in double figures in each of the last two seasons for the Buccaneers.

Junior guard Patrick Good (@patgood00) talks about his health and where things stand heading into the 2019-2020 season #ETSUTough pic.twitter.com/SHmFJfPRk8

Rodriguez will make an impact on the glass for ETSU.

This season, the redshirt senior is averaging 7.7 rebounds per game to go along with 8.7 points per outing. Rodriguez has a total of 19 points over the last two contests. Last year, Rodriguez ranked eighth among NCAA Division I players in rebounds per game with an average of 10.9.

Great look by Jeromy Rodriguez on this backdoor cut, finding Patrick Good for the score! pic.twitter.com/CxLv3OFQwR

ETSU will have some size to compete with Kansas in the paint.

N’Guessan is familiar with the Jayhawks, as he transferred to ETSU last year after playing two seasons for Oklahoma State. With the Cowboys, he started 17 games and made a total of 54 appearances. N’Guessan led the team in shooting percentage as a freshman with a clip of 67.4 percent.

This season, N’Guessan is averaging 5.7 points and 4.3 rebounds per game for the Buccaneers. He played in 23 games, which included 10 starts, during his first season with ETSU last year.

Lucas N'Guessan has experience playing inside Allen Fieldhouse during his time at Oklahoma State... Listen to what he has to say about the Bucs' upcoming trip to take on No. 5 Kansas #ETSUTough pic.twitter.com/2C6V2wcrUl

ETSU is coached by Steve Forbes who is 133-39 in his fifth season as an NCAA Division I head coach, all at ETSU. East Tennessee State is 3-0 for the first time since the 1998-99 season when the Buccaneers opened the year 4-0.

As of Tuesday morning, KU was favored by 15 points via Odds Shark. The drubbing of Monmouth might have influenced this number a bit, considering the fact that KU was favored by 14.5 points against UNC Greensboro and failed to cover.

ETSU is supposed to be better than that, and it is a program that played well against some quality teams under Forbes. The Bucs defeated Georgia Tech in 2015 and Mississippi State in 2016. They also lost by just 2 points at then-No. 3 Xavier in 2017. This game should be closer than the line indicates, but I think Kansas ultimately hangs on.

At this point in the season I would think that the young team also has the most room for growth. Getting Moses back from injury helps but a majority of the team is still figuring out how to play alongside one another. I’m looking for continued growth from all the players and a cover.