Getting to know: Oklahoma State football 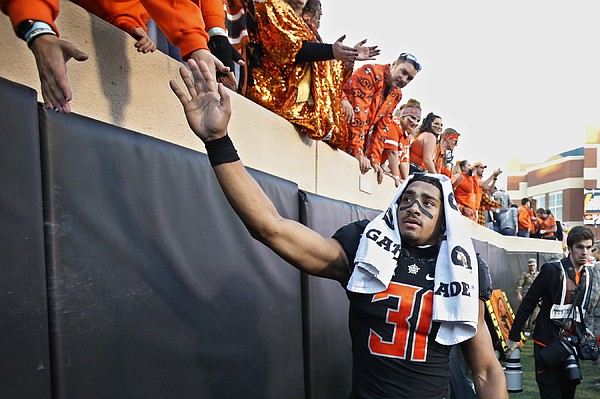 It has been two weeks since Kansas had a dud performance against Kansas State in front of a sellout crowd at David Booth Kansas Memorial Stadium.

The bye week came at an opportune time for the Jayhawks, who fell flat in a 38-10 loss. It gave them an extra week to self-scout and get healthy before the final stretch of the 2019 season, which features two road games and one home contest.

But the problem is that Oklahoma State is coming off a bye week as well, and has more momentum entering Les Miles’ return to Stillwater.

OSU has an explosive offense behind the nation’s leading rusher in Chuba Hubbard. Other than the Sunflower Showdown, KU’s offense has been very effective since Brent Dearmon took over play calling duties. So there should be plenty of points in this game.

Whether or not Kansas can cover the 17.5-point spread remains to be seen, however. Let’s take a closer look at the Cowboys to find out if that is possible.

Quarterback — Redshirt freshman Spencer Sanders has made a number of plays through the air and on the ground during his first year as the starting quarterback. He’s already the all-time OSU freshman leader in season passing yards. Sanders also ranked third among Power 5 quarterbacks with 588 rushing yards.

Running backs — For a Kansas defense that struggles to stop the run, this will be a tough matchup. Redshirt sophomore Chuba Hubbard is the FBS leader in rushing yards, yards per game, yards per carry and all purpose yards. In fact, his 178.6 rushing yards per game is 33.1 more than second-place A.J. Dillon of Boston College.

Receivers — Redshirt junior Dillon Stoner stepped in as OSU's top receiver after Biletnikoff finalist Tylan Wallace was lost for the season to injury before the TCU game. Stoner finished the TCU win with a career-best two touchdowns and a season-best 93 receiving yards. Braydon Johnson, Landon Wolf and Jordan McCray are involved in the passing game as well.

Offensive line — Redshirt junior Teven Jenkins, who is from Topeka, Kansas, is slated to start at right tackle. He has made 24 total starts, including every game last season at either right tackle or left tackle. Left guard Marcus Keyes has started 45 games for OSU, which is 11 more than anyone else on the entire roster. Left tackle Dylan Galloway has 10 career starts for the Cowboys.

Defensive line — True freshman Trace Ford has become a playmaker on this defense at the end spot. He has 18 tackles, two sacks and six quarterback hurries. Ford is the only true freshman to start a game for Oklahoma State so far this season. Defensive tackles Israel Antwine and Cameron Murray are also new starters for the Cowboys this year.

Linebackers — Junior Malcolm Rodriguez leads the team and ranks third in the Big 12 with 8.2 tackles per game. His 168 career tackles paces the squad, and he notched a game-winning pick-six in the fourth quarter at Iowa State. Amen Ogbongbemiga ranks among the top-eight in the Big 12 in tackles, TFL and sacks this season.

Secondary — Senior cornerback A.J. Green is one of 14 national semifinalists for the Jim Thorpe Award presented to the nation's top defensive back. Cornerback Rodarius Williams is a three-year starter, and is tied with Green for most starts on the Cowboy defense with 35. Safety Tre Sterling has 38 tackles in his past six games.

SPECIAL TEAMS — Kicker Matt Ammendola is third among active FBS players with 331 career points. He has made two 53-yard field goals during his career. Punter Tom Hutton, a 29-year-old true freshman, was recruited through ProKick Australia.

FUN FACT — Les Miles returns to Stillwater to play Oklahoma State for the first time in his career. As the leader of the Cowboys, Miles led Oklahoma State to a 28-21 record, where they reached three-consecutive bowl games after starting 4-7 in his first year.

VEGAS SAYS… The Jayhawks are getting 17.5 points as of Friday afternoon in their Week 12 matchup with the Cowboys. Kansas has typically fared well when it is counted out this much, and I expect that trend to continue this week. KU’s defense won’t be able to stop Oklahoma State’s ground game, but I expect the offense to bounce back.