Getting to know: Kansas State football 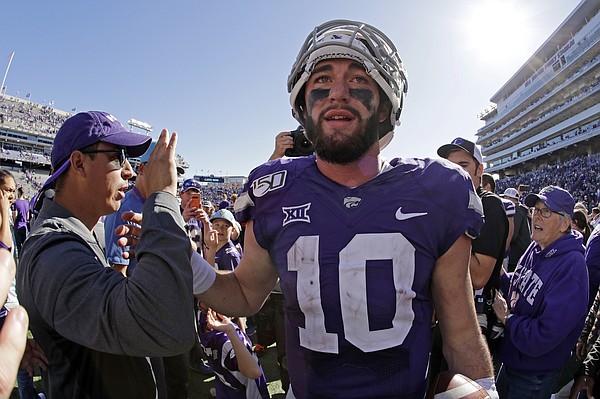 This year’s Sunflower Showdown has a different feel to it than previous years.

Last season, there was some conversation about how Kansas was closing the gap in this rivalry with Kansas State. But that was fake, and had more to do with the Wildcats not playing well than the Jayhawks exceeding expectations.

This time around, both teams are heading into this week’s matchup with some momentum. Kansas State (5-2, 2-2 Big 12) has won two games in a row, including an impressive win over Oklahoma in Manhattan last weekend. KU (3-5, 1-4) is coming off a 37-34 victory over Texas Tech and suffered a 50-48 loss to Texas the week before that.

It is safe to say the hype for this game is not fake, and it is rightfully the most highly-anticipated Sunflower Showdown in over a decade. Kickoff is slated for 2:30 p.m. Saturday at David Booth Kansas Memorial Stadium.

As of Friday afternoon, Kansas State was favored by 5.5 points on FanDuel’s Sportsbook. According to Odds Shark, the Jayhawks will be less than a 10-point underdog against the Wildcats for the first time since 2010. KU, which was just a three-point underdog under Turner Gill, was handed a 59-7 drubbing back then.

Will the Jayhawks not only cover but find a way to end a double-digit losing skid in this rivalry? Let’s take a closer look at the Wildcats to find out:

Quarterback — Junior Skylar Thompson is now the starter for the Wildcats after splitting signal caller duties in 2017 and 2018. Thompson is more effective on the run, as he scored four rushing touchdowns against Oklahoma last weekend. That could be a problem for the Jayhawks, who let Texas Tech quarterback Jet Duffey break free against a number of three-man rushes on third down last weekend.

Running backs — The Wildcats will try to lean on the ground game and control the clock this weekend. K-State enters this week ranked fifth nationally in time of possession at 34:45. Senior running back James Gilbert has 558 yards and five scores on 100 attempts. Jordon Brown, who sustained a left leg injury against OU, is also expected to play against Kansas.

Receivers — Dalton Schoen, who is from Blue Valley Northwest, is coming off a five-catch performance against Oklahoma. He ranks eighth in program history with an average of 16.82 yards per catch. Redshirt freshman Malik Knowles has 15 catches for 224 yards for two scores this season.

Offensive line — The five starters along the offensive line have combined for 129 starts at Kansas State with a majority of those coming from left tackle Scott Frantz (45), right guard Tyler Mitchell (37) center Adam Holtorf (32). Frantz, who is from Free State, has made 45 consecutive starts for the Wildcats.

Defensive line — Kansas quarterback Carter Stanley has done a good job under pressure over the last two weeks, but Kansas State’s defensive line will be his toughest test yet. Reggie Walker and Wyatt Hubert are the two defensive ends. Walker has 16 career sacks, and Hubert recorded 4.5 sacks as a freshman last year. Defensive tackle Trey Dishon has started 42 consecutive games and Jordan Mittie has held down the other tackle position for K-State.

Linebackers — The Wildcats have excelled in terms of getting off the field on third down, ranking second in the nation in third down defense in all of college football. Junior Elijah Sulivan is manning the middle linebacker spot. Senior Da’Quan Patton is slated to start at weak-side linebacker.

SPECIAL TEAMS — The Wildcats have the advantage in special teams. Kicker Blake Lynch has a career field goal percentage of 88.5% (23-for-26), which ranks first in school history. Kansas State punter Devin Anctil has averaged 46.3 yards on his 31 punts this season, a mark that currently stands as the school record and ranks ninth in the country

FUN FACT — This year’s edition of the Sunflower Showdown marks the 12th time in series history, but the first since 1986, that both programs have new head coach in the same season.

VEGAS SAYS… This line has settled in as KU being 5.5-point underdogs, according to FanDuel’s Sportsbook. For my money, this game is really going to come down to which team can dictate the style of play.

I hate to make it so simple, because football is not this easy. But the Jayhawks can’t afford to start off slow, as has been the case for much of the season. The Wildcats will just run the ball and control the clock, meaning KU’s offense might not get enough opportunities to erase a double-digit deficit like it did last week.

That being said, K-State’s defense isn’t as good as the total numbers might indicate. Kansas should be able to have success on offense this weekend. I have a hard time believing Kansas will come out flat in this one. The Jayhawks could turn this into a shootout if they get out to an early lead, which would favor their style of play. If that happens, KU should cover and ultimately win this one outright.

Destroy the Wildcats! DESTROY THEM ALL!!!

I hope you're right, Shane, but those numbers are scary, and I have a hard time picturing KU being able to stop KSU's running game enough to win.