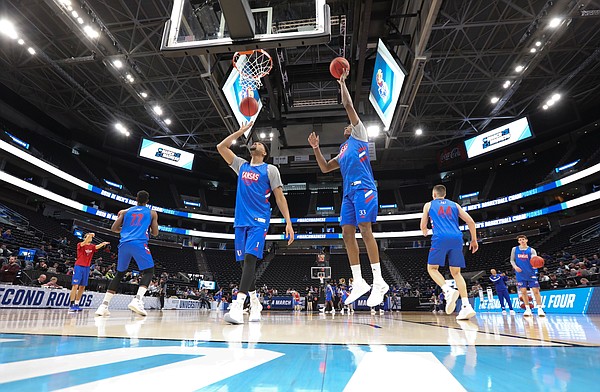 Salt Lake City — Northeastern center Anthony Green had a solid scouting report on Kansas before head coach Bill Coen even talked to the team ahead of the opening round of the NCAA Tournament.

During media availability Wednesday afternoon at at Vivint Smart Home Arena, Green admitted he has seen plenty of the Jayhawks on TV before he even knew the Huskies were going to play them.

As a result, the senior big man believes the key to claiming the program’s first victory in the NCAA Tournament since 1982 is pretty simple.

“The biggest obstacle is just keeping them out of the paint,” Green said. “Their best game is when they score 40-plus points in the paint, so that's something we have to try and stop."

Those duties will likely fall on the broad shoulders of Green, who has a Big 12-like frame at 6-foot-10, 252 pounds.

At least from the start, Green will be tasked with guarding 6-foot-10 center David McCormack of Kansas. The first few minutes of the contest, which is slated to begin at approximately 3 p.m. Thursday, could go a long way in determining which team will dictate the style of play.

Fourth-seeded Kansas (25-9) believes it could have an advantage with its talented frontcourt, while 13th-seeded Northeastern (23-10) will try to thrive in a four-guard lineup around Green.

“We can cut them up if they go four out,” Green said. “I feel like it is going to be a good game, going down to the wire." 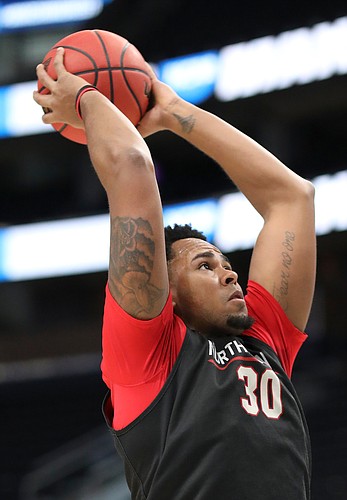 Don’t expect Green to be intimated by KU’s length, despite playing in the Colonial Athletic Association.

Green has already had multiple battles with UNC Wilmington center Devontae Cacok, who leads the nation with a 33.5 defensive rebounding percentage. Green has handled nearly every type of opponent during his 33 starts this season.

In his final year, Green is averaging 8.9 points and 5.4 rebounds per game. He’s shooting 68.4 percent from the floor, and has recorded 25 blocks.

“Anthony is a really important piece for us,” junior guard Donnell Gresham said. “He’s obviously really big, athletic and can move. I think when there are four guards around him, he tends to play pretty good and we try to feed off him.”

Green is the biggest reason Northeastern ranks 12th in the nation with an average 2.52 dunk per game.

The Huskies lead Hofstra 42-26 at the break. pic.twitter.com/lfajwn9sEv

None by CBS Sports Network

This season, Green has recorded 75.9 percent of his team’s slams with 63 total dunks this year. Only six players in the country have recorded more dunks this year. In fact, Green is ranked one spot ahead of Duke freshman Zion Williamson, who has 52 slams.

“He gives you another option coming off a screen,” junior guard Jordan Roland said. “He’s a guy that you can just throw the ball up anywhere around the rim and he can go catch that and dunk it.”

McCormack is no stranger to facing that type of player, as he squared off against Jaxson Hayes of Texas and Derek Culver of West Virginia in the Big 12 tournament just last weekend. That could be the difference in the pivotal battle in the opening round.

“I just have to make sure I'm quick and can stay under him,” McCormack said. “I feel like if we start out strong then we can dictate the game how we want.”

Watching the practice clip, it'd be a miracle to survive the first round. High altitude, low/flat 3pt shooting forms (Grimes, Moore, Garrett), they are recipes for disaster. We will have to ride Lawson & Dotson to hit from every angle. Rock Chalk!

Don't forget about Ochai. He showed a beautiful shooting form in the beginning, so it still has to be there somewhere, and there's no time like the present for it to show up again.

His upper body, yes. His legs, no. David's jumper is also really bad. Dotson shows if he focuses, he can make shots from downtown. The Lawsons have beautiful strokes, too. Mitch, Teahan actually have a nice release. Let's see if miracle happens. And I still have hope in COACHING STAFF to help develop these kids to get better, to SHOOT WITH THE CORRECT FORM AND MECHANIC. Trust me, these kids NEED to be guided, trained to develop personal skills - not just to be asked to play X and O.

This may be a game for Lightfoot; I can see him swatting shots and having fun.