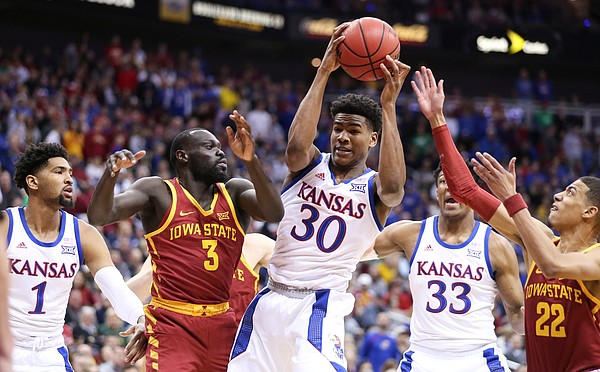 Forget the fact the game was out of reach, because the outcome was essentially decided by the time Kansas freshman Ochai Agbaji got things going.

But the final 12-plus minutes of KU's 88-74 win over West Virginia Friday night was a promising stretch for the freshman, who has been struggling as of late. Agbaji scored all nine of his points down the stretch, which matched his best scoring performance over the last five outings.

If Agbaji can bottle that up, and play similarly in the NCAA Tournament, it could help KU make a serious run as the fourth seed in the Midwest region.

“I think it helps my confidence just to see that ball go through the net,” Agbaji said. “I feel like that is good moving forward.”

Now, of course, the strong finish against WVU didn't help Agbaji the next day when he scored 5 points in 21 minutes against Iowa State. The entire Kansas team struggled to hit shots during the Big 12 championship game, however.

But that’s not the point. Everyone, including Agbaji, knows he can play better. And that could be the difference in how far Kansas will go.

The lofty expectations for Agbaji are a credit to the way he stormed onto the scene. It didn’t take long for Agbaji to make an impact after having his redshirt pulled on Jan. 9. Agabaji scored in double figures six times in nine games between Jan. 29 and March 2, including three 20-point performances.

Since then, though, Agbaji has hit a slump. He’s scored a total of 31 points over the last five games on 32.6 percent shooting. Agbaji has even heeded advice from fellow freshman Quentin Grimes, who dealt with his own struggles in his rookie season after a dominating debut.

“I talked to Quentin, and he told me to just play my game,” Agbaji said. “I appreciated it so much, because it shows he is looking out for me. I was helping him through his stuff, and he always kept his head up. It is good to have that type of relationship.”

Grimes was the first one to talk to Agbaji when he found out he wasn’t starting the second half of the Big 12 semifinals, as head coach Bill Self replaced the freshman with sophomore Marcus Garrett.

“I think that actually helped me,” Agbaji said. “It just gave me another look coming into the game, and I was able to bring some energy when I came into the game.”

Agbaji checked in at the 13:30 mark against West Virginia, netting his first bucket on a jumper one minute later to put Kansas up by 18. Agabaji connected on a triple with 8:51 left to play after not hitting a 3-pointer in his previous two games.

“It was good to see it go in for once,” Agbaji said. “After that, I think I just started playing more freely and not too tense like I have been playing offensively.”

Agbaji polished things with a pair of dunks, the first of which came off an assist by freshman David McCormack. The second slam came via an alley-oop from freshman Devon Dotson in transition, though Agbaji had to make a late adjustment to finish off the sequence.

“He’s a freakish athlete, so I don’t put a lot of things past him,” McCormack said.

That might be the easiest way for Agbaji to turn things around, too.

Agbaji recorded a dunk on his very first possession on a designed lob pass from Dotson. In 20 games, Agbaji has registered 15 total dunks. Prior to his two slams against WVU, Agbaji notched just one dunk over his previous six contests.

“It could definitely help him get going, get his confidence going,” Dotson said. “It could get him back to how he was playing. It is great to see when everyone is rolling like that.”

We also missed some lob passes, those are some big splash plays that we didn't convert, I can't remember who was on either side of those.

Young team with very little tourney experience on the floor. If they don't play tight, don't play not to lose, they CAN win out this weekend. Next weekend is a whole 'nother matter, but I'm hopeful...just keep fighting!

Jayhawks need a "Downtown" Terry Brown vs. Kentucky performer for the next 6 games.

Yeah, they are REALLY going to need offensive production from Agbaji and Grimes to have any success in the tournament. Agbaji has been really tight. It may not have helped him playing in KC. He swished a 3 point shot at the end of the game Saturday when it didn’t matter, and it was apparent he didn’t think about it, just shot it. That’s what he needs to do. He and Grimes need to be aggressive but play loose. Easier said than done in the tournament, especially for freshmen.