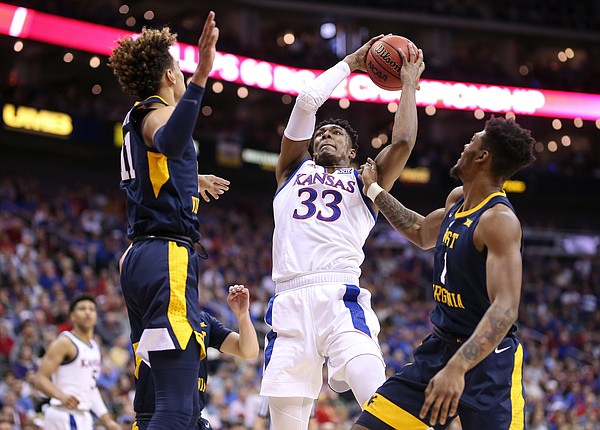 Self pulled starting center David McCormack from the game after the freshman big man committed an early turnover and struggled with his defensive assignment out of the gate. McCormack did not check back into the game until the 14:22 mark in the first half.

“I thought David was not as good as he has been, being candid,” Self said following KU’s 88-74 win over West Virginia Friday night in the Sprint Center. “I didn’t think he came ready to guard and that was his main assignment.”

McCormack was tasked with defending WVU freshman Derek Culver, who was leading the team in scoring entering the Big 12 semifinals.

Early on, Culver was winning the battle of the rookie big men. He powered his way to seven points in the first half, hitting all three shots he took. Culver also collected seven rebounds, as West Virginia hung around with Kansas for much of the first half.

McCormack countered in the second half, forcing Culver to miss six shots over the final 20 minutes. Culver ultimately finished with 14 points and 11 rebounds, but it took more effort than usual down the stretch.

“Derek Culver is a load, and he still got his numbers, but I thought David did a pretty nice job in the second half,” Self said. “(David) doesn’t have to score for him to play well, but he has to defend and rebound well.”

That was the case Friday night, as McCormack finished sixth on the team in scoring with seven points. McCormack tallied eight rebounds to match a team-high, as well.

Although McCormack flipped the script in the second half, it was a play midway through the first half that really got things going for him.

With 9:30 left in the first half West Virginia passed the ball around the perimeter while McCormack and Culver battled on the left block. McCormack tried to trap a WVU player on the short corner, but was able to get back to Culver when he received the pass with five seconds remaining on the shot clock.

McCormack stayed his ground, avoiding contact, as Culver tried to make multiple moves. Culver was called for a traveling violation, and McCormack flexed his arms in celebration.

“It was definitely a big moment, because coach told me I had to man up and guard him,” McCormack said. “I took pride in that possession to make sure he didn’t get the ball, and he couldn’t do anything with it when he did.”

It was enough to set the tone for the Jayhawks on the highest-scoring game of the Big 12 tournament.

Kansas recorded over half of its scoring production in the paint, notching 46 interior points against West Virginia. KU out-rebounded WVU by a 43-33 margin, despite Bob Huggins’ squad being a top-10 team in offensive rebounding.

And McCormack was at the forefront of that. He collected eight rebounds, including five on the offensive end, to match Dedric Lawson and Quentin Grimes for the team high. It marked the second consecutive game that McCormack has led KU in rebounding.

McCormack now has at least five rebounds in four consecutive games. Prior to that, McCormack had four such performances through the first 27 contests.

With KU employing more of a two-big lineup, it is is prudent that McCormack continues to have performances like he has had as of late. For now, though, McCormack has his eyes set on helping Kansas clinch a Big 12 tourney title.

“It is a team coming together to win a championship in their conference,” McCormack said. “It is a big deal.”

It seemed to me that Culver got tired of battling inside. There were several shot in the 2nd half where Culver was settling for moving away from the basket for mid-range shots and missing those lower percentage shots. Tribute to DMac's strong, steady play inside.