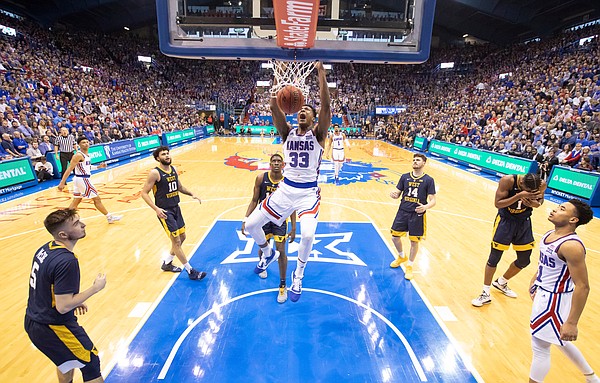 Kansas forward David McCormack (33) roars as he dunks late in the second half against West Virginia, Saturday, Feb. 16, 2019 at Allen Fieldhouse. by Nick Krug

It has become a familiar matchup in the Big 12 tournament, though this year’s showdown is admittedly surprising.

Kansas and West Virginia will square off in the semifinals Friday night in the Sprint Center in what is a rematch of the last year’s championship game. It is the third time these two teams have met in the event.

The rubber match was made possible by West Virginia, which became the first No. 10 seed to make the Big 12 semifinals since the league went to 10 teams. With another upset, the Mountaineers would advance to the championship game for the fourth year in a row.

“The team I watched play tonight is hungry,” KU coach Bill Self said of West Virginia. “Forget about the records when Kansas West Virginia play, you usually get your money’s worth as a game.”

Tipoff is slated for approximately 8:30 p.m.

Series history: This series started when WVU joined the Big 12 Conference in 2012-13 and KU holds an 11-5 advantage. The Jayhawks have won five of the last six meetings. 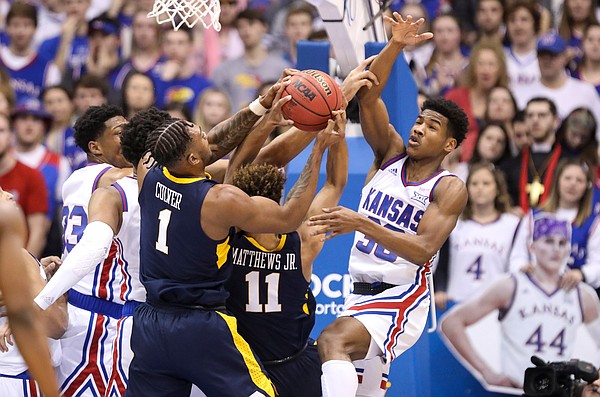 In his rookie campaign, Culver is leading the starting unit with an average of 11.6 points per game.

Earlier this season, Culver had 22 points and 21 rebounds vs. TCU, becoming the first WVU player to have a 20-20 game since Mo Robinson in 1977. 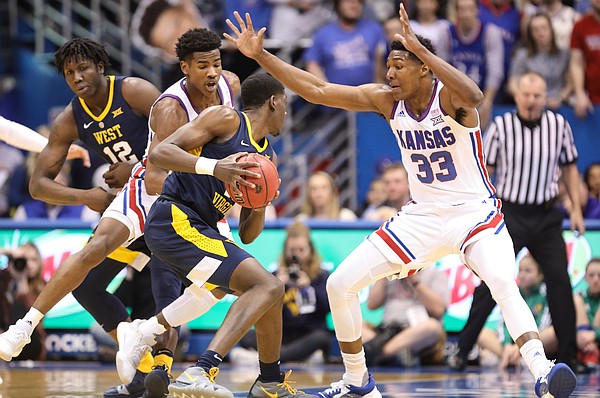 West is one of two starters to average in double figures, posting 10.7 points per game this year.

In league play, West is taking 22.8 percent of West Virginia’s shots. In his career, West has hit a total of 146 3-pointers. West is shooting 32.4 percent from long range this season, going 56-of-173 from the floor.

West was one of five players to score in double figures last night, posting 10 points in the upset over Texas Tech. 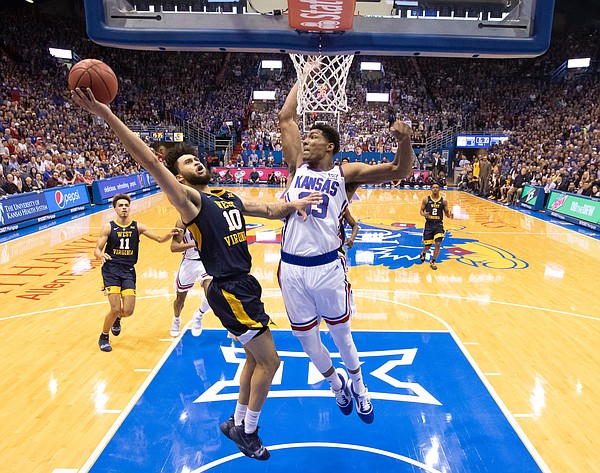 Kansas forward David McCormack (33) soars in to block a shot from West Virginia guard Jermaine Haley (10) during the second half, Saturday, Feb. 16, 2019 at Allen Fieldhouse. by Nick Krug

West Virginia has become a different team as of late, and Haley has been a big reason why.

Haley has scored 123 points in the last seven games, averaging 6.5 points and 4.0 rebounds per contest this season. Against the Red Raiders, Haley scored 11 points to go along with five rebounds and three assists.

In the first meeting between KU and West Virginia, Haley’s coast-to-coast layup with seven seconds to play served as the game winner in Morgantown. 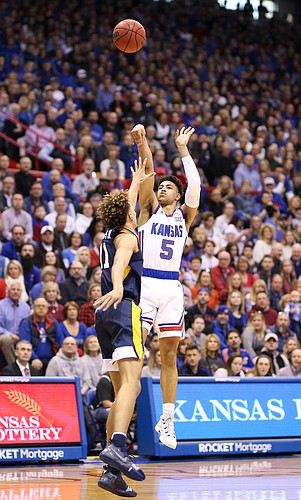 The Mountaineers leaned on Matthews to pull off the upset over the Red Raiders in the quarterfinals.

Matthews dropped a career-high 28 points against Texas Tech, shooting 10-of-14 from the floor. Matthews also hit a pair of 3-pointers, while recording eight rebounds and two steals in 33 minutes.

The 28-point performance by Matthews was the second-most points by a Big 12 freshman this season.

Just as Bob Huggins’ teams have historically done, the Mountaineers are tremendous on the glass. West Virginia is posting a 37.0 percent offensive rebound rate, which ranks seventh in the nation via KenPom.

West Virginia doesn’t particularly take care of the ball well, which means KU can take advantage with some layups in transition off turnovers. WVU is posting a 21.9 percent turnover rate, a mark that ranks 326th in the country.

Bob Huggins’ record now stands at 859-360 in his 37th season as a head coach. He needs 17 more victories to tie Adolph Rupp for seventh place all-time. Huggins is the fourth-winningest active Division I coach behind Mike Krzyzewski, Jim Boeheim and Roy Williams.

According to Action Network, Kansas is a 10.5-point favorite over West Virginia as of Friday afternoon. That really does seem like a lot of points, and a majority of the bets seem to be on the Mountaineers. I’ll take the points, but I don’t think KU will have to sweat this one out in the end.

You forgot Jordan McCabe (no relation to Brett) , the freshman guard from Kaukauna, Wisconsin (home of the cheese spread) who has played well recently running their offense at point guard.

KU looks for revenge against a Culver (oops Derek that is). Order me up a Culver's Wisconsin butter burger and triple thick milk shake! Rock Chalk!

Shane! Shane! Where is the KU-WVU Gameday Breakdown? I cannot find it!