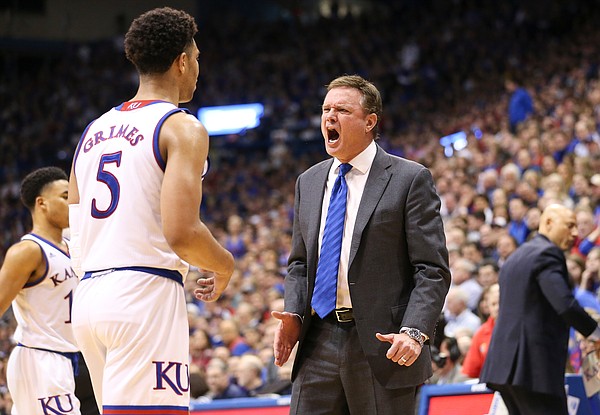 Kansas head coach Bill Self rips into Kansas guard Quentin Grimes (5) during the second half, Monday, Feb. 25, 2019 at Allen Fieldhouse. by Nick Krug

It may not have been Quentin Grimes’ initial plan, but he’s choosing to make the most of his current situation.

The one-time 5-star prospect has had a wild 12-plus months since joining the Kansas basketball program. At first, the expectation was for Grimes to play one season with the Jayhawks before eventually becoming a likely lottery pick in the 2019 NBA Draft. That didn’t happen.

Grimes did start all 36 games for the Jayhawks during his freshman season in 2018-19, but never seemed to meet expectations. He averaged 8.4 points, 2.5 rebounds and 2.0 assists in 27.4 minutes per game last year.

Still, Grimes chose to enter the NBA Draft even though his stock had plummeted. Grimes eventually pulled his name out of the pool on May 29, though he immediately announced that he would be transferring. It wasn’t until late June that Grimes revealed his next stop, as he chose to continue his playing career at the University of Houston.

To say it was an unusual path for Grimes would be an understatement. This past weekend, Grimes sat down with NCAA.com correspondent Andy Katz to go over his crazy summer in an interview that was posted via Twitter on July 20.

When asked what led to transferring from KU, it was clear that it was an easy decision for Grimes.

“I feel like Kansas was a good, OK, alright season for me,” Grimes said. “I just feel like it wasn’t a good situation all in all. I feel like I just kind of had to get a new start, go to a different setting (and) different environment.”

Perhaps Houston is the perfect situation for Grimes to thrive then. The UH campus is roughly an hour away from Grimes’ home in The Woodlands, Texas. The Cougars have had success, winning the American Athletic Conference with a 16-2 record a season ago before falling in the Sweet 16 to Kentucky in the Midwest region.

Grimes initially wanted to play right away, but his waiver request was ultimately denied. As a result, Grimes plans to make improvements while sitting out for the 2019-20 campaign.

“Coming here, I get to work on my game,” Grimes said. “I get to tighten everything up, so that when I do get to play, when I am ready, that I will definitely be able to jump in there and go back to that old Quentin that everybody is used to seeing.”

But Grimes doesn’t want to just get back to the way things used to be. In fact, Grimes told Katz that he believes he can hit a different gear when he returns to the court for the 2020-21 season.

“I feel like my game would have taken off to a different level, honestly,” Grimes said. “I feel like having all that responsibility on my shoulders is definitely going to push me and lead me to a different direction, just unlock something I didn’t know I had in me. I feel like a year from now, I will probably be a totally different person on and off the court.”

"They embraced me right away when I came on my visit. @CoachSampsonUH is building something great here in this city."

I feel like mentally this kid just didn't have it. Too many expectations here and he couldn't handle it when people started to question his game. I'm sure he is a great kid and good ballplayer. But I think he was over hyped coming out of High School. It happens and things don't always work out....... but I feel like he is basically placing the blame of his poor performance on KU and that's just a cop out. Another privileged kid who picked up his toys and went elsewhere when things didn't go his way. Good riddance!!

Kids transfer all the time for whatever reason. I stopped even concerning myself with they why of it all. He'll get his chance to be the "man" or whatever on Houston. But the sweet 16 is about their ceiling anyway. If he wanted a chance at something greater from a team perspective and self-sacrifice a bit, then he would have stayed at KU. This move will give him a chance to improve his game and be closer to home, probably the two biggest motivating factors for him. Good Luck Kiddo, but we'll be just fine without him.

Welp Quentin, if you'd shot 6 to 8 percentage points better from behind the arc, your season would have been better than "good, OK, alright". Nobody was shooting those shots but you, you can't blame the fans because YOU keep on missing.

Alas, you're probably better suited for mid major basketball. It will hopefully provide you with a slightly lesser level of competition so that you can work on your game and maybe one day live up to the hype you had coming out of high school.

It didn't work out for him at KU period. I've seen so many 'busts' turn into great players w/a different coach and a fresh start.

Not everyone can be great all the time and the coaches need to put players in a position to succeed. Jared Goff is the perfect example. Considered a bust after one year to be an MVP candidate a year later.

Name one KU player that transferred and then did anything in the NBA. This was the most ludicrous move I have ever heard of. After thinking he was one and done, but wasn't, he instead transfers from KU to a midmajor so that he can sit out a year. Cant wrap my head around it.

I put a lot of this on Self. Remember when he said Quentin Grimes ‘is probably as complete a guard as we’ve ever had’. So we went from that to a total disaster and not a good fit. What gives? Self either completely messed this up and has lost it when evaluating talent or he was trying to hype his own player way more than the capability. this shines the light even more on Self's "use and throw" approach wwhere he will try to exploit talent to the fullest, the the moment that starts not panning out, throw the player under the bus. Very Caliparish!

When the hell did Self throw the kid under the bus...he started every game.

Don't think you can blame Self for Quentin being soft, he gave him every opportunity to succeed..

BS, and I don’t mean Bill Self! Self gave Grimes every opportunity to succeed and with rare exceptions the kid couldn’t come through. But Self never threw “the player under the bus”. That’s a flat out lie. From what I have read and heard Self never said a bad thing about the young man, he was never anything but supportive of Grimes. You got an example where he was, post it to back up your outrageous statement. You don’t, then shut up.

The fact of the matter is Quentin Grimes got his butt beat by Dotson. Grimes is a Point Guard and that is where Grimes wanted to start. Bill Self tried to appease Grimes and make a full time shooting guard out of him. But for now, shooting guard is a position Grimes has difficulty playing. He is used to shooting off the dribble and not the pass. To make matters worse, Grimes appears to be slow to play the #2 spot. Playing "Catch and Shoot" he seems to get his shots off uncomfortably. Maybe with the year off he can either adjust to playing as a shooting guard or maybe he finally gets to start at PG. Good luck to him!

totally agree with Brian on this. Dotson is simply a better point guard and Coach went with him. I don't see Grimes as having the quickness and ball handling skills to run the point, at least not at the college level. He probably needs to continue to try to make the switch to the number 2.

Great landing place for a SOFT player like Grimes. He can use his skills and athletic ability to dominate in their league like he did in high school. Maybe he will prefer the G league over the NBA as well because he feels he can match the competition. Players with drive to be the best player in the nation do not go from Kansas to Houston, soft players who always prefer the easy path do..

I just can't imagine he will end up being that much better of a player after a Houston redshirt year and then playing a year there than he would have been had he stayed through his junior year at the University of Kansas. But who knows... he may have had issues with Coach, or teammates, or personal life stuff. He's a young guy with his whole life ahead of him and I wish him nothing but the best going forward.

I HATE reading KU fans that bash a former (or current) player. It's completely unnecessary. Obviously things didn't work out like everyone hoped, but he wasn't a disaster and you could see flashes of potential. I believe if he came back for his sophomore year, things could have looked a lot better. However, he wanted to play PG and once Dotson decided to come back for his sophomore year, he felt like he had to transfer to show off his skill set.
I don't think I would have made that decision if my goal was to get to the NBA as fast as possible (I mean, he could have just waited a year at KU and worked on his game and improved playing off the ball and if it still didn't work out, likely move to PG assuming Dotson left after his sophomore year) but I understand the motivation.

I don't think most of us are bashing on the kid, we're just being honest. He couldn't cut it here, plain and simple. I think he lacks the mental toughness to play at a high level program where the coach is going to hold him accountable and make sure he's helping the TEAM and not just worrying about him. At Houston he can go be the star he wants to be....... good luck to the kid.

Maybe, it's too bad it happens at all. He didn't live up to expectations and bolted. You're going to get a few negative comments under those comments.

Nothing over the top.

Such a weird situation, I don't really understand this kid at all, but that's okay, it's not really my place to understand him...or really to judge him for that matter. That said, it seems like he was pretty unhappy and he could have handled the interview way worse. Good luck I guess...

Grimes wanted to play PG. He's more comfortable there. Is he better there? He'll get to show the world at UH. Time will tell.

Coach Self loves combo guards. There were times when Grimes more than lived up to that. He had a good freshman season as well. It just wasn’t draft worthy and neither was his combine performance. Obviously he needs to develop regardless of where he plays or who he plays for.

The photo above kinda says it all, doesn't it!