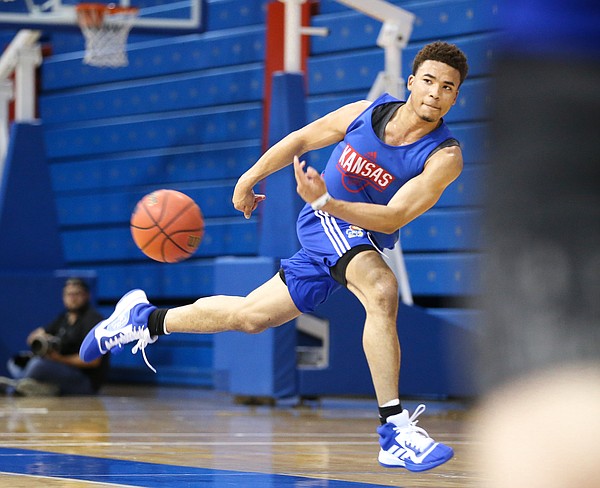 Kansas guard Devon Dotson (11) saves an out of bounds ball during a scrimmage on Tuesday, June 11, 2019 at Allen Fieldhouse. by Nick Krug

Kansas point guard Devon Dotson might just have his answer memorized by now.

Since announcing his decision to return to KU for his sophomore season, which came at 7:59 p.m. on May 29, Dotson has fielded many questions about electing to pull his name from the NBA draft pool. When asked about returning to Kansas, Dotson has alluded to the fact he has things he wants to accomplish for the 2019-20 campaign.

Dotson’s interview with NCAA.com correspondent Andy Katz was no different, which was posted via Twitter Monday morning. To begin the interview, Katz asked Dotson about why he came back to KU.

“I felt like, from a team perspective, I had unfinished business. We fell short of some team goals that we had last season,” Dotson said.

It was a similar answer to what Dotson have given since coming back to Lawrence. After all, last year’s team ended a streak of 14 consecutive Big 12 regular-season titles when it finished third in the conference behind Texas Tech and Kansas State.

Later in the interview, Dotson even admitted that is something that pushes the Jayhawks this offseason.

“We don’t want to be the players that didn’t win anything to come through here in the past 14 years,” Dotson said. “For the bigger picture, which is the national championship, I feel like we have a great chance of coming close or achieving that goal.”

While team success is clearly important to Dotson, the most interesting answer he gave during his interview with Katz was about himself.

Katz noted that Kansas head coach Bill Self considers Dotson as a Big 12 Player of the Year candidate and could be one of the better players in the country. When asked what makes Self believe this, Dotson admitted that he’s been motivated this summer.

“I am making a point to be in the gym multiple times a day. Just getting that extra reps in and just improving every aspect of my game,” Dotson said. “I’m a student of the game and will try to soak any information I can out of the coaches. I’m hungry, I just want to take it to the next level.”

That type of determination is impressive, especially considering how well Dotson’s debut season went. Dotson, who started all 36 games as a freshman, averaged 12.3 points, 3.7 rebounds and 3.5 assists per game while playing an average of 32.4 minutes per contest. Dotson was named to the All-Big 12 third team and also landed on the conference’s all-freshman team.

So how will he do even better during his second act? Well, Dotson may have shed some light on that when asked about what he learned about his game during the NBA Draft process.

“Getting more consistent on my outside shot,” Dotson said. “Just leading out there, talking more out there on the court. Just improving all aspects of the game — IQ wise, passing. I felt like it has helped out a lot. I heard they think really highly of me. If I decide to come out next year, it will be a great spot.”

Dotson shot just 36.3% from long range last season on an average of 2.5 3-point attempts per contest. Early prognosticators believe that Dotson will take a big jump this season. Bart Torvik projects Dotson to lead KU in both points (16) and assists (4.4) per game. He also ranks Kansas as the No. 3 team in the nation behind Florida and Michigan State.

Katz considered Dotson as not only KU’s best player but one of the top players in the country before the interview. Katz ranked Dotson as the No. 12 player in the country ahead of the 2019-20 season. Udoka Azubuike, who was listed at No. 14, is the only other Jayhawk on the top-25 list by Katz.

Given that Kansas is returning 55.2 percent of its minutes from last season, Dotson’s ability to take the next step might be the difference in what this team can accomplish this year.

“This team has a lot of depth to it,” Dotson said. “This season should be really exciting, I’m looking forward to it.”

“We fell short of some team goals we had last season. I want to try to win a #NationalChampionship.”

Devon Dotson tells @TheAndyKatz why he came back to @KUHoops! pic.twitter.com/7t0FYTOYqY

While the points will probably go up without Dedric, he will have so many options to make plays this year, the stable of bigs we didnt have last year will keep defenders honest, so all he has to do is beat his man, draw secondary help, then dish for a slam, score himself with either a layup or from the foul line. Last year with no Doke, no Silvio and then no Vick, everybody knew it was going to Dedric and bless his heart, he gave it his all, and it worked pretty well till crunch time. This year, Dotson should get at least 3 lobs a game, upping the assist numbers, and then resulting in wide open looks from outside instead of taking last second shots. I'm excited for this young man and it all starts with the level head on his shoulders! Kudos to his parents.