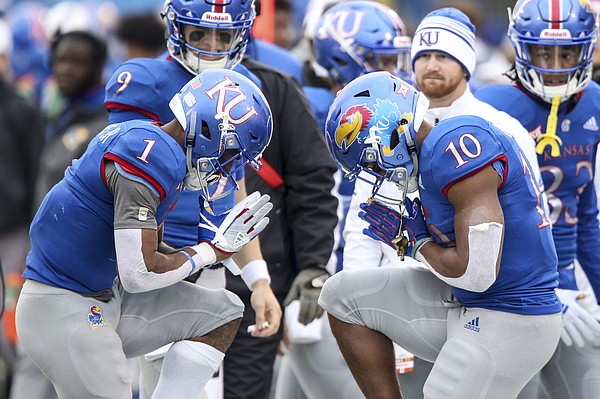 Arlington, Texas — Senior running back Khalil Herbert has always been enthralled with the superhero universe.

Herbert is a fan of both Marvel and DC, which has been the case for as long as he can remember. He has a collection of comic books and his walls are draped with posters in his room. And, of course, he has watched all the movies as well. Herbert’s favorite superhero is Flash.

But when asked to assign a superhero to each of the three Kansas running backs, Herbert didn’t even give himself Flash. He assigned that to soon-to-be sophomore Pooka Williams Jr., who exploded for 1,660 all-purpose yards as a freshman last year.

“Pooka is definitely the Flash,” Herbert said. “Pooka is fast.”

Williams was named Big 12 Offensive Freshman of the Year last season after rushing for 1,125 yards and seven scores on 161 carries. It marked the second-most rushing yards by a KU freshman in a single season, and is tied for eight all-time in program history.

So who does Herbert think he is then? Iron Man, of course.

Last season, Herbert had the second-most rushing attempts with 113. Herbert turned that into 499 yards and five touchdowns. It was a complementary role due to the emergence of Pooka, though Herbert has shown he’s capable of leading a superhero cast.

In fact, Herbert ran for a career-best 291 yards against West Virginia in 2017, which ranks third on KU’s single-game rushing list. He will be the likely starter for the season opener, when Pooka serves his one-game suspension.

As for Dom Williams, Herbert gave the 5-foot-10, 200-pound junior back the title of Captain America.

“I’d say Dom is Captain America, because Dom is really strong (and has a) big chest,” Herbert said.

Dom Williams carried the ball 55 times for 231 yards as a sophomore last year. In his freshman campaign, Williams ran for 176 yards and three scores on 51 attempts. Herbert even gave a superhero title to head coach Les Miles, who will try to get the most out of KU’s backfield in 2019.

“Probably the Hulk,” Herbert said. “He’s cool, calm and collected. Something happens, and he can just flip the switch.”

Superheroes or not, the three-headed backfield figures to be the strength of KU’s offense during Miles’ first year at the helm. Given Miles’ history running the ball, it may just be the perfect match for the Jayhawks this year.

“I feel like we have the best RB unit in the nation,” Herbert said. “Me, Pooka and Dom. We got some young guys coming up too. There is no drop-off when one of us goes into the game.”