Three-point play: Why Kansas struggled in transition during 77-60 loss to Iowa State 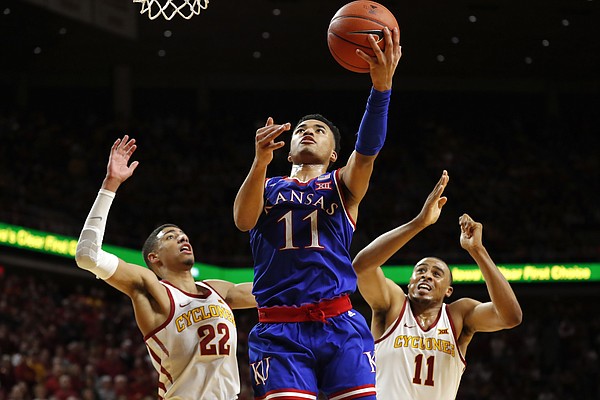 Kansas coach Bill Self joked that he may not rewatch Saturday’s 77-60 loss to Iowa State in his postgame press conference.

Of course, I’m sure Self was not being serious, seeing as there are many things Kansas could potentially learn from its first conference loss. After all, KU led for just 5:55, the shortest amount of time it has led this season and the fewest since the Jayhawks never led in a loss at Oklahoma State last season.

But on the off chance he was being serious, I went ahead and rewatched the game on the drive back to Lawrence from Ames, Iowa for the latest edition of three-point play. In case you weren’t aware, I started this new blog following the Big 12 opener. It is to point out a few specific takeaways the day after each game, which will almost always include gifs or stats.

On a day where many things went wrong for Kansas, here are a few particular things that stood out to me.

KU was a non-factor in transition

Perhaps the best play to illustrate everything that went wrong during KU’s 17-point thumping at Iowa State occurred with seven-plus minutes left in the first half.

Freshman Devon Dotson ripped the ball from Nick Weiler-Babb early in the possession, a trait Dotson has demonstrated many times already this season. After that, Dotson was off to the races to get a bucket in transition. But he wasn’t alone either.

All four of his teammates followed suit, as freshman Quentin Grimes filled the middle of the lane and Marcus Garrett went right. Dedric Lawson and Charlie Moore were trailing the trio, but were still closer to the ball than the Cyclones.

In fact, only Talen Horton-Tucker stood in the way from an easy bucket by KU. The Jayhawks, though, would not capitalize on the distinct advantage. And multiple parties were to blame for the fastreak blunder.

Dotson drove to the left side, but the dished the ball back to Grimes in the middle too soon and didn’t force the lone defender to commit. Grimes, meanwhile, was trying avoid a charge after being called for one just a minute earlier. So he quickly pitched it to Garrett who mishandled the pass and KU was forced to set up an offense rather than take advantage of the easy basket.

Of course, Iowa State prioritized keeping Kansas from getting transition buckets throughout Saturday’s tilt. The Cyclones rotated their guards back to defense following most shots, in order to have a body between the Jayhawks and the rim.

KU, which produced 16 fast break points against Oklahoma in the Big 12 opener, finished with just four such points at ISU. It marked the team’s fewest points via fast break in a single game this season.

“Our biggest thing (was) transition defense,” ISU coach Steve Prohm said. “Don’t let them beat us in the paint and let’s keep them in front and contest shots.”

Iowa State deserves credit for its job against KU in this area, though this particular play was more due to KU’s own miscues.

KU continues to struggle defending the 3

The Jayhawks have struggled to defend the triple this season, which was a talking point for much of the nonconference slate.

Iowa State wasn’t supposed to be a huge threat from deep, however. Entering Saturday, the Cyclones were shooting just 34.9 percent from long range, which ranked 142nd in the nation at the time. ISU was getting just 31.6 of its point production via the 3-point shot.

Saturday’s numbers? Much different. Iowa State shot 52 percent from long range, hitting 13-of-25 from deep. Over 50 percent of the Cyclones’ points against the defending Big 12 champs came via the long ball. It marked ISU’s highest clip from deep in any game this season and was the team’s highest rate of points coming from beyond the arc in any contest as well.

And it was evident early that KU’s defensive woes in this particular area were going to continue.

Senior Lagerald Vick left his feet to defend a 3-pointer, but Iowa State’s Marial Shayok knew what to do. With Vick in the air, Shayok took one dribble to his left and then proceeded to fire up a wide-open triple to drill the team’s first 3-pointer of the game.

Give the Cyclones credit for knocking down shots, but the Jayhawks struggled to defend most of the made 3s all day.

Moore was late to get to the corner on ISU’s second 3-pointer, which came with 9:58 left in the first half. KU’s rotation defense was poor on the third triple of the game, when Shayok connected on an open look from the top of the key.

Kansas lost Tyrese Haliburton in transition, as he buried a shot from long range with three seconds remaining in the first half. And a majority of the nine second-half 3-pointers by Iowa State had a similar theme.

It is no secret that Self is a wizard with his designed sets after timeouts.

In order to have one positive takeaway in this blog, I figured we’d highlight the two sets that stood out to me in the second half. At the time, I honestly though they were going to be crucial possessions, but the Cyclones eventually broke the game open to bury these ATO gems by Self.

The first occurred following the media timeout at the 14:52 mark in the second half. Self, of course, likes to create angles for his posts, which is especially critical when Lawson is the focal point of the offense with Udoka Azubuike sidelined.

On this particular play, Kansas accomplished just that as Dotson threaded a pass to Lawson before Moore’s defender could help over. It is hard to tell by the end of this gif, since there is a size limit on the file, but it appears Dotson points to the bench after Lawson’s bucket.

Perhaps the best ATO play, though, took place after the timeout at the 12:21 mark. And it was for Garrett of all people.

Garrett scored on a slip screen via a perfect pass from Dotson, who hit his teammate in stride. The lane was cleared out by Grimes, who it appeared the play might have originally been set up for as he headed to the top of key behind a pair of screens.

It is also worth noting that Dotson finished with three assists, two of which came on designed sets following timeouts by the KU coaching staff.

The three point defensive problems have been a theme this season and quite frankly back to prior seasons. The usual cause for past upsets in the tournament has been teams lighting it up from 3 point land.

My question for Self is at what point does the coaching staff own the issue and take a hard look at how they are teaching defense.

Great article, Shane. Spot-on analysis, but most fans already knew those KU's shortcomings. But why you think just because ATO plays - a coach deemed brilliant. A brilliant coach would produce a team that plays good 30-40 minute ball, not just 2-3 great ATO plays. A magician? A wizard? Please..

Appreciate the feedback. I did clarify that Self is a wizard at designed sets after timeouts. I mean that's not really a secret. I do think most KU fans knew the team struggled to defend the 3-pointer, but the team's struggles in transition yesterday were new. Iowa State clearly made that an emphasis.

Great article, as I said. We might not be entitled as a KU MBB coach, but I think you could also provide a 'what if' to solve some of those aforementioned team's issues. You mentioned in gyph1, transition, Dotson passed the ball too early to Q, -- what if he took it all the way, or lobbed it to Garrett? In previous games, Garrett got a steal, but came up short with his contested layup.