Getting to know: Colorado basketball 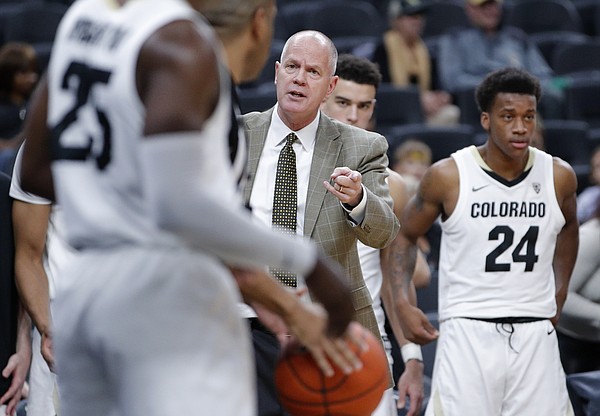 Colorado head coach Tad Boyle speaks with an official during the second half on an NCAA college basketball game against Wyoming, Sunday, Nov. 24, 2019, in Las Vegas. (AP Photo/John Locher) by Associated Press

After over a week off, No. 2 Kansas will return to the hardwood.

Fresh off an impressive run through the Maui Invitational, KU doesn’t really get a breather in its first game back. The Jayhawks will play host to No. 20 Colorado at 6 p.m. Saturday at Allen Fieldhouse.

This season, the Buffaloes are averaging 69.0 points per game and rank in the top-10 nationally in scoring defense at 56.3 points per contest. Colorado is 7-0 on the year, which includes a 74-64 home win over Loyola Marymount on Wednesday. 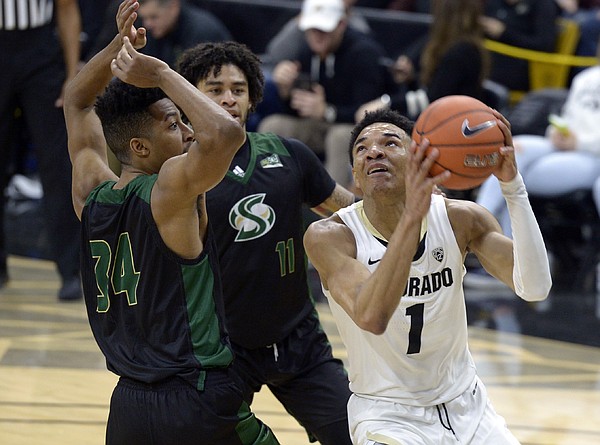 For the second game in a row, KU’s defense will have the challenge of defending a dynamic forward.

Bey leads Colorado in scoring at 14.0 points per game and rebounds at 12.0 per contest, which ranks fourth in the Pac-12 Conference. Bey also leads the team with 15 blocked shots and 15 steals and has 17 assists so far this year.

He’s currently sixth on KenPom’s National Player of the Year rankings. For comparison, Obi Toppin of Dayton is ninth and Kansas point guard Devon Dotson is listed at 10th.

Entering this season, Bey was named to multiple watch lists due to his breakout sophomore campaign. He paced the Buffaloes with 13.6 points and 9.9 rebounds per game, shooting 54.1 percent from the floor, en route to being named the Pac-12 Most Improved Player of the Year.

In addition, Bey led the Pac-12 and ranked 15th in the nation with 17 double-doubles last year.

"It means a lot. I got to perform in front of my mom...I played great in my city."@TheAndyKatz caught up with Tyler Bey after the Las Vegas native earned MVP honors as undefeated No. 21 @CUBuffsMBB won the @MGMResortsIntl Main Event at @TMobileArena on Tuesday.#Pac12Hoops pic.twitter.com/1SONuhYcpa

None by Pac-12 Conference 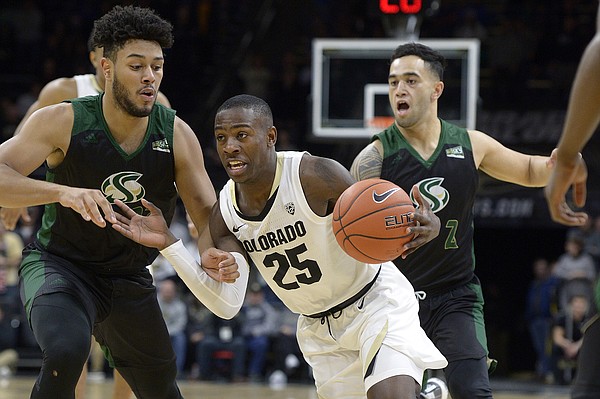 Like KU’s duo of Dotson and Udoka Azubuike, Colorado’s 1-2 punch of Bey and Wright is a lethal combination.

While Wright is not on KenPom’s Player of the Year rankings, he was on most NPOY watch lists entering this season. Wright has a team-high 26 assists this season and he is scoring 12.4 points per game.

Junior guard McKinley Wright IV talks about the two latest wins for @CUBuffsMBB as he sits down with @MJBuffsVoice in this segment.

The Buffalo Stampede airs on Altitude on Wednesdays and Pac-12 Networks on Thursdays.#GoBuffs pic.twitter.com/zoOTD8h3Uo

None by Colorado Buffaloes

Schwartz has been Colorado’s top 3-point shooter so far this season.

Schwartz has made a team-high 14 3-pointers this year and he is averaging 12.3 points per contest. On Wednesday against Loyola Marymount, Schwartz finished with a season-high 16 points on 5-of-9 shooting, including 4-of-7 from beyond the arc.

This season, Schwartz is shooting 47.5% from the field and 51.7% from downtown. He is also leading the team in 3-point attempts (27). As a sophomore, Schwartz averaged 9.2 points and 3.7 rebounds while starting 35 games on the wing.

D'Shawn Schwartz with a nice corner 3!

None by Colorado Men's Basketball 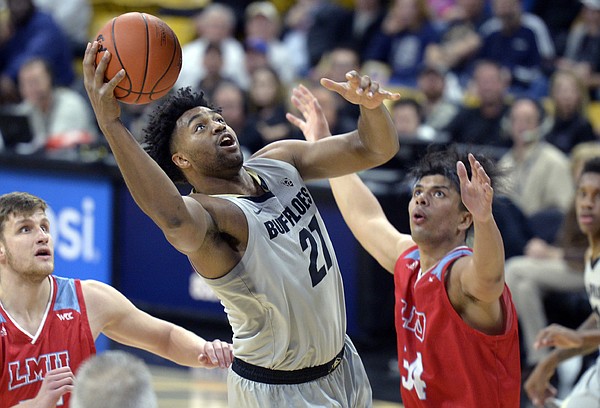 Battey is second on the team in rebounding with 6.6 rebounds per game to go along with his 8.7 points per outing scoring average.

After sitting out 2017-18 due to an academic redshirt, Battey made his debut for the Buffaloes last year. He averaged 8.1 points and 4.4 rebounds per game, ranking third on the team in field goal percentage (.484) on the year.

Coming out of high school, ESPN had him rated as the No. 17 post player in the nation and 11th-best player overall in the state of California.

None by Pac-12 Network

ONE THING COLORADO IS GOOD AT

The Buffaloes have played well on the defensive end, particularly on 2-point shots. According to KenPom, opposing teams have connected on 39.2% of their 2-point attempts against Colorado. That is the eight-best defensive mark in the nation entering the weekend.

ONE THING COLORADO IS BAD AT

Colorado has struggled with taking care of the ball over the last two games, something that could prove to be a major problem in Allen Fieldhouse. CU has 37 turnovers over the last two outings, while ranking 238th in turnover rate (20.8) in the nation for the entire season.

According to FanDuel’s Sportsbook, Kansas is considered a 9.5-point favorite over Colorado as of Saturday morning. Considering KenPom projects KU to win by eight, the betting line does make sense. With both teams being top-10 in adjusted defensive efficiency, this should be a lower-scoring game. As a result, I’m going to take the points in this one.