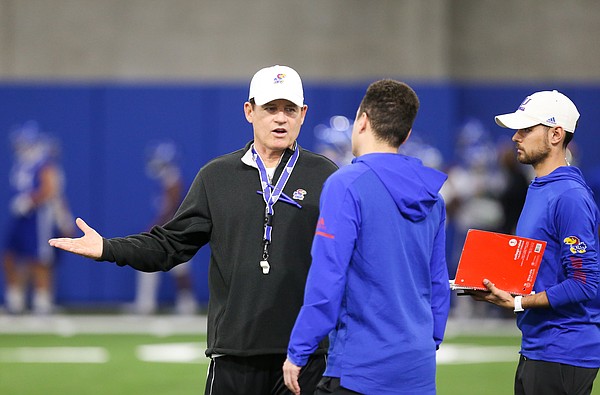 Kansas head coach Les Miles talks with members of his staff during football practice on Wednesday, March 6, 2019 within the new indoor practice facility. by Nick Krug

Les Miles, who has a national championship on his resume, is the head football coach at Kansas.

Year 1 of Miles is 22 days away, and it is still quite uncertain how the 2019 campaign will unfold. Miles has a history of winning at both LSU and Oklahoma State. KU, meanwhile, has not won more than three games since 2009.

The Jayhawks were picked last in the Big 12 preseason poll as voted on by the media. It marked the ninth year in a row that has been the case.

But what do the Big 12 coaches think about Miles being at the helm? On Friday, we may have gotten our first real glance at just that. Athlon Sports released an article that had anonymous quotes on each Big 12 team from opposing conference foes.

"Right now this is the hardest job in the country, certainly in the Power 5,” one coach told Athlon Sports.

The anonymous quotes allow us to sift through some coach speak, and get an honest view of the Miles experience from familiar faces. I’ve also provided my own thoughts on each quote.

With that, let’s dive into what the opposing coaches told Athlon Sports:

Quote: "Where do you start? David Beaty had them looking better than they have in years, and he still got fired. I don't know what they expect Les Miles to do. It's about the scholarships, not the coaching. They're still screwed up from the Charlie Weis juco mess, and then Beaty tried to fix it doing the same thing because he knew he'd get fired."

There is some truth to this quote actually. Kansas went 3-9 last year, which was something the team hadn’t accomplished since 2014.

Still, it remains to be seen if the scholarship mess will be cleared up under Miles.

Quote: "They have the one running back out of New Orleans, Pooka Williams Jr. He stands out, but I'm not sure what else they can put around him."

This is a fair concern, though I’d argue that the Jayhawks have capable weapons in the backfield at least. Khalil Herbert and Dom Williams are viable options at running back, and will handle things just fine in the season opener when Pooka Williams Jr. serves his one-game suspension.

Kansas also has 93 career starts on the offensive line and that unit figures to be a strength.

KU has a depleted receiver unit, as Stephon Robinson Jr. is the leading returning receiver after catching 28 passes in 2018. And, of course, the Jayhawks have struggled to find competent quarterback play since Todd Reesing.

Quote: "I think Chip Lindsey leaving for the Troy job was smart for everyone involved; it's a lot likelier that Les will let Les Koenning call his offense. Lindsey would've opened it up more than any Les Miles program in history. It will be interesting to see how Les responds to the pace of scoring in this league."

OK, I’m starting to think this notion that Miles can’t coach in a high-scoring league is overblown. In 2018, only five of the 10 Big 12 team averaged at least 30 points per game. Baylor, which was sixth in the league in scoring, posted a total of 384 points in 13 games.

Guess what? During Miles’ 11 full seasons at LSU, his team had nine different campaigns where it scored more than 384 points in a year. The Tigers scored 541 points in 2007 and 500 in 2011. Oklahoma is the only Big 12 team that scored more than that last year, as it piled up 677 points.

Is Miles going to have the same success at Kansas? Of course not, at least not right away. But let’s not pretend that it isn’t possible that KU could finish near the top-half of the league in scoring under Miles.

Quote: "Defensively they've lost their best guys, Daniel Wise and the kid who led the league in tackles (Joe Dineen Jr.). They don't have any experience at defensive line or linebacker. Not sure what they'll try to do scheme-wise."

This might be the most accurate anonymous quote. The defensive front is a huge concern for the Jayhawks, and that unit is why I think Kansas will struggle during Miles’ first season in Lawrence.

Miles has been weirdly optimistic about this group, as he praised the linebackers during Thursday’s press conference. Miles even believes that KU can improve its pass rush in 2019.

All of that might be easier said than done, however.

Quote: "The question right now is not who you're gonna beat on the field, because that's not happening, it's where are you going to win in recruiting? You can't go juco. Les can't live in Louisiana on guys."

It is way too early to be taking victory laps in recruiting, but Kansas has certainly got off to a strong start in that regard.

Earlier this week, KU netted a verbal commitment four-star linebacker Brennon Scott, who is already the team’s ninth-best recruit since 2000. According to Rivals, Kansas now has the 26th-best recruiting class in the nation behind a group of 23 high school seniors. KU trails only Texas and Oklahoma among Big 12 teams in the national recruiting rankings.

None of these commitments are locked in, as they can’t sign a letter of intent until December at the earliest. Still, it illustrates that Miles might have found a way to win in recruiting without going the junior college route.

The comment about Beaty is somewhat valid, however it ignores the point that Beaty was a terrible game coach. He constantly made decisions that would baffle anyone with even a modicum of common sense, and seemed out of his element even after having done it for a few years. They made progress because they had more talent, but his coaching still cost them way too many times.

As for recruiting, the coach who made that comment seemed to totally negate the fact that, at least for now, Miles can recruit based on his name and reputation alone, which is clearly showing in the results so far.

Agreed. + All other B12 recruiting classes are verbal and subject to modification...maybe not as much as OU & UT but...

The coaches quoted say nothing or no nothing about the transformation of support staff Miles required in order to take this job. There's a lot of improvements that are under the radar which will pay off later. This 2020 commitment class is one.

The recruiting comment is the same knee jerk reaction that has been all too common around here. The difference between the two juco couldn’t be more stark. One had 50% of the players never even get on the field while the other had as many come with more than 2 years. One had players regularly showing up late for fall camp because of eligibility and one had few that weren’t part of spring practices. One resulted in losing 30 players and one resulted gaining 30 players. Such nonsense.

Love the stat about performance against the thread. Guessing that’s part of why Les thinks we’re close. Beaty never grew into being a game day coach as we all knew from the beginning that he needed to, but he/they did recruit and develop the players.

Les should continue and improve the recruiting and development but really looking forward to his leadership and especially on game day.

Kind of Bogus comments about turning around the scholarship situation. IMO that is what Beaty was hired to do and any wins were a bonus. When this year's Senior class graduates KU will be getting rid of 75 percent of their Juco players and transfers. IMO, Beaty planned this to happen to be in position to clear the roster and have 80 of our own moving forward. But before he could clear the roster he had to build one. So it is what it is. Now, KU has about 70 players on scholarship and within the next 4 years KU will be back up near 80. Once you give away 25 schollies 3 years in a row and fail to chase off your players you get to 80 quick. But Beaty's situation was different. He only had 28 scholarship players on the team. That's 9 per class not including Freshmen. After recruiting his first class he had just 45 players and he had to add 60 walk-ons just to practice.

Len is spot on though. Beaty was a pretty bad game day coach.

This article is too long. Here’s what it should say:

The nine other Big 12 coaches said in nine different ways ‘Until they prove it on the field, we are not worried about facing KU football no matter who the coach is.’

We've got our big name guy with proven success. If in three years, we're talking about firing him because he hasn't won 6 games yet, then the problem isn't the coach...it's US as fans. You've got to be realistic about what Les Miles is taking over, which is to say one of the worst football programs in all of power conference football.