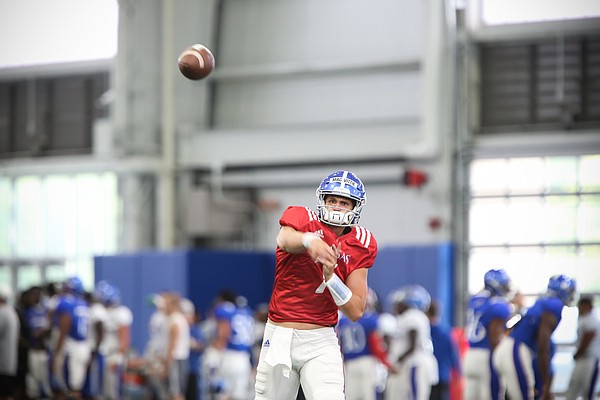 Nobody knows if Thomas MacVittie is the answer for the Kansas football team.

The Jayhawks have struggled to find stability at the quarterback position for the past decade. MacVittie transferred to Kansas from Mesa Community College this offseason, and has appeared to become the favorite to land the starting quarterback job for head coach Les Miles.

MacVittie is new, which naturally means fans want to believe that he might solve KU’s quarterback problem. But a recent article by Pro Football Focus, in which it ranked all starting quarterbacks in the FBS, might end up tempering those expectations for MacVittie.

PFF listed MacVittie as the No. 110 overall starting quarterback, meaning he is ranked higher than just 20 collegiate signal callers. MacVittie is 23 spots lower than any other Big 12 signal caller, as TCU’s Alex Delton is ranked No. 87 overall.

MacVittie is exactly one spot behind Nevada’s Malik Henry, who was previously at Independence Community College and the star from the past two seasons of the Netflix show Last Chance U.

Here is what PFF had to say about MacVittie: “Originally a 4-star recruit from Moeller High School in Cincinnati, MacVittie lands at Kansas for what now is his junior season after garnering No. 1 JUCO pro-style QB ranking from 247Sports. MacVittie has more upside than his counterpart to win the gig and more projection than actual data backing him as he went the JUCO route to hone his abilities as a quarterback after two years basically away from the position at Pittsburgh from 2016-17.”

Obviously, that is not what Kansas fans want to hear with a little over two weeks away from Miles’ debut.

There is a hope in MacVittie, who is someone that Miles attempted to recruit at LSU. MacVittie even has the pedigree as a four-star recruit out of high school. He tossed 1,064 yards and 16 touchdowns in six games last season with Mesa CC.

At the same time, there is still plenty of unknown with MacVittie. He only got on the field at Pitt by playing special teams, which was just three games in 2017. Miles has yet to even name MacVittie the starter, as he recently said that Carter Stanley is still in the mix for the job.

Does this mean MacVittie can’t succeed this fall? Of course not. He, or perhaps even Stanley, could exceed expectations. This list just shows that it might take some time for Miles to completely solve KU’s quarterback conundrum.

I guess this is a good way of tempering fan expectations! But I think most observers expect KU to run the ball significantly more than it passes. Hopefully MacVittie or Stanley can be "good enough" and help the offensive coordinator mix up the play calling to keep defenses guessing a little. I'd personally feel better if Stanley was named the starter, but if MacVittie shows he deserves it in practice, then good for him. The two areas of most concern IMHO for this team is the D line and the QB play. The QB efficiency can be bolstered by a powerful running back crew, which we have the potential for. The D line is the bigger of the questions in my mind. Our first four games should be the most winnable (thus most important) of any on our schedule and each of those teams is likely going to be run oriented too. Can KU's inexperienced D line meet the challenge and not wear out after getting repeatedly pounded on all game long? Can KU's O line and running backs wear out their D lines? Who gets more tired first? Time of possession will be huge.

From the PFF article:

"Combing through our play-by-play data ad nauseam, these rankings take into account a quarterback’s PFF grade both from last season, and all other subsequent sets of data that we have on their time in college."

Looks like their ranking is more "hey, we don't know anything about this guy, so we ranked him low" instead of "ehh, this guy isn't that good"

Pretty much a "clickbait" article, LJW.

His juco stats were extremely unimpressive, so I'm not sure the rating is that far off.

Just read an article that said his juco stats include 1000 throwing yards and 16 touchdowns in 6 games. Not real unimpressive at all, in my book.

Yep, and I believe he threw a bunch of interceptions as well -- against juco competition.

While the D's that intercepting him were less talented that Big12 D's, it is just as likely the receivers were as well. Wonder how many of the 46.5% were dropped passes or wrong routes. We'll need better than that from both ends of the passes if we're going to progress.

In digging a little deeper, all of his sacks and half the INT's came in the first game of the year.

Matt's comment is about the same as I was going to post. It seems the ranking is more PFF doesn't want to go out on a limb because they don't have any real data on MacVittie. Can't blame them for that. I see this as Bulletin Board material for our guys. Time will tell...

But there IS real data on MacVittie -- his juco stats against far weaker competition.

i wonder where Stanley would of been ranked if they would of used him instead of MacVittie?

In my view, there are way too many “raters” out there in print and on the radio or TV. What they do is so artificial and theoretical that it’s pretty worthless to pay any attention to.

Hopefully MacVittie will do well. I actually think Stanley is a gamer and could be counted on to lead the team. Based on the performance of some QB’s after transferring from KU, it appears that the past problem at the QB slot may not have been the players but the coaches. It does remain to be seen if Miles is the answer.

Michael - I would suggest deferentiating between player (QB) and players (rest of the team) and that this could easily have factored into the PFF ratings as well.

The reality is that the QB gets a lot more credit and blame for the team’s performance than they deserve. Guessing things would have been significantly better the last few years if we had future NFL receivers and conversely for Reesing if he had as many dropped passes as recent QBs.

Maybe the transfer QBs have had success because of different coaches and maybe they have been surrounded by more successful teammates that in turn make them look better.

The reality is that football is a sport where opponents can neutralize individual players if there isn’t a complimentary supporting cast. So far we’ve not proven to the world that we have enough players to make a difference. It’s been getting better but we’re still on the bottom working our way up.

So all pre-season we either get sunshine from the local writers who probably wanna win as much as we do, or rankings from national types that never watch one minute of KU football, let alone tape of some kid from JUCO. Big deal!!! Bring on the Les Miles's years, I'm excited about it, and I don't care at all what these dudes thing of our team!

Andy - Exactly! There was a nice headline when the preseason rankings came out. Basically the players saying we know we’re pick last and that we have to prove them wrong. They’re confident and the local reporters are quoting them while national reporters are mostly running off history.

Silly article,Shane. No one can provide a reasonable ranking of any player, much less a quarterback without him playing a down. These people don't even know what the offense is going to look like, much less even who Les Miles is going to designate to lead it.

I mean he can't be any worse than Dayne Crist, or Jake Heaps, or Montell Cozart.

As a serious comparison, does anyone think Alan Bowman is that much better than Skylar Thompson? I know we are not KSU fans but Skylar is a pretty talented kid who Snyder tried to get killed by running him a lot as he always does. Therefore, his QB rating is not as good as it might have been. I believe the new Coaches might very well change the fortunes of some of the Big 12 QB's. Hoping Les is able to do that with our guys.

Careful Joe. There are some here who believe that Montel was one of the quality QBs that just had the misfortune of playing for the previous coach. All would have been fine with a better coach. Maybe even just someone who got off their butt and tried.