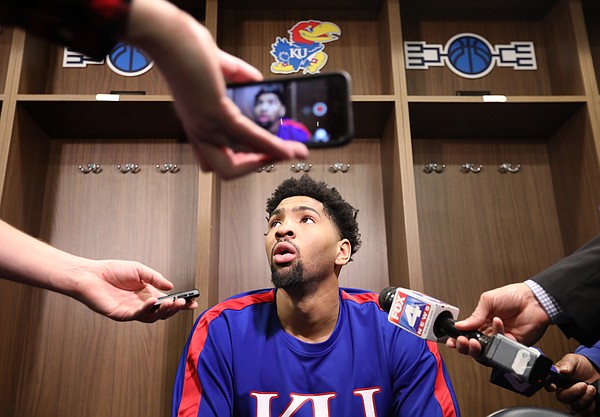 After a year of putting up numbers on a nightly basis, redshirt junior Dedric Lawson has declared for the 2019 NBA Draft.

Kansas fans may not have fully appreciated what Lawson accomplished this season, especially given the fact the team was unable to make it past the first weekend of the NCAA Tournament. Lawson, who was a consensus third team All-American, averaged 19.4 points and 10.3 rebounds per game.

It was evident from his debut that Lawson had an uncanny ability to get his numbers. He dropped 31 points and 15 rebounds in 23 minutes during the exhibition opener against Emporia State, and Kansas coach Bill Self called it “the ugliest 31 he’s ever seen.” Lawson agreed.

Lawson failed to hit double figures in just two of his 36 games as a Jayhawk. He recorded 22 double-doubles en route to earning 2019 Big 12 Newcomer of the Year and unanimous all-Big 12 First Team honors.

To not appreciate that absurd level of consistency would be foolish. With that, let’s look back on some of Lawson’s top moments in his lone season with the Jayhawks.

He made a shot from hit butt

It was so long ago that I thought we’d start with arguably his most ridiculous bucket. By the way, this was within the first two minutes of the game against Louisiana.

It gave Kansas a 5-0 lead in an eventual 89-76 win over Louisiana at Allen Fieldhouse. Seriously, imagine being a member of the visiting team and knowing how hard it is to defeat KU in Allen Fieldhouse. Then the Jayhawks start off with a basket like that. It is just mean.

Another early-season feat by Lawson is worthy of a mention.

Lawson, who was often described as having an old-man game by broadcasters, showed the ability to get up during an overtime win against Tennessee. Lawson recorded his first slam off an alley-oop pass from Lagerald Vick. He later flushed the ball in transition to put the finishing touches on an 87-81 win.

Dedric Lawson with the slam in transition #KUbball pic.twitter.com/xsD4igIfSn

Not counting the exhibition games, or the ones that didn’t count, those two dunks were the only slams by Lawson of his brief Kansas career. That’s why the second one, where Lawson had to beat everyone down the court in transition, seemed so significant at the time.

Before Lawson even stepped on the court, Self lauded the Memphis native for his passing ability.

KU fans didn’t get a good chance to see Lawson’s passing prowess, because he was forced to move inside after Udoka Azubuike was sidelined. Lawson became the focal point of the offense, and that prevented him from having very many chances to show off his ability as a set-up man.

Still, his assist against Kentucky was a nice glimpse of what could have been. Lawson, who was under the basket, somehow threaded a pass around multiple Kentucky defenders to freshman Ochai Agbaji in the corner.

Nice find by Dedric Lawson on a 3-pointer for Agbaji #kubball pic.twitter.com/zDfg7jvonW

Best performance as a Jayhawk?

According to Torvik, Lawson’s best single-game performance via offensive rating was against Villanova.

Lawson posted an offensive rating of 157.4 in 38 minutes during the 74-71 home win against the 2018 national champs. He recorded a 25.3 percent usage rate for the game, which was below his 28.5 usage rate on the season. It marked his second game as KU’s center, as Lawson scored 28 points and collected 12 rebounds. He was 10-for-15 from the floor.

In terms of points, Lawson only had three better games. He scored a personal-best 31 points to go along with 14 rebounds against TCU on Jan. 9. He took 19 shots to do so, however. Perhaps there were better games than his showing against Villanova, but that was the first real look at what life would be like without Azubuike for the Jayhawks.

Lawson made the most of his first-ever trip to the NCAA Tournament, helping Kansas quickly remove any concern of a possible upset against 13th-seeded Northeastern in the first round.

The Jayhawks thrashed the Huskies by an 87-53 margin behind a combined 38 points, 14 rebounds from Dedric Lawson and his brother K.J. Lawson, who has elected to transfer. Dedric Lawson scored 25 points and grabbed 11 rebounds. He also drilled a trio of 3-pointers in his first and only win in the NCAA Tournament.

After the game, Lawson admitted to reporters that he went to bed early because he was so excited for the game. And he ultimately delivered, just as he did so many other times throughout his one season with the Jayhawks.