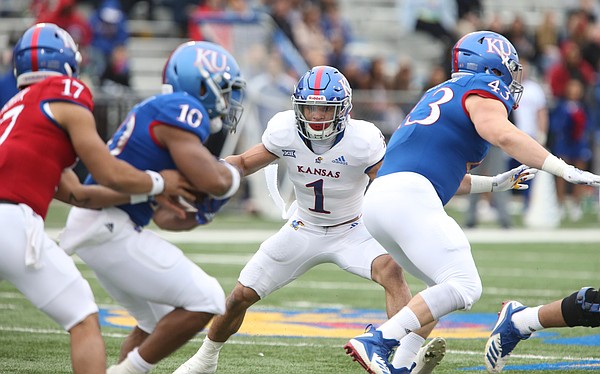 White team safety Bryce Torneden watches the handoff during Late Night Under the Lights on Saturday, April, 13, 2019 at Memorial Stadium. by Nick Krug

The odds were always going to be stacked against the defense during Saturday’s spring game at David Booth Kansas Memorial Stadium.

After all, it took a defensive score off a turnover to get the “white” team on the scoreboard. The offense, which was considered the blue team for the event, abused this loophole by scoring 45 unanswered points en route to a 45-7 win in the first spring game of the Les Miles era.

Sophomore safety Davon Ferguson gifted the defense its only points of the night with less than seven minutes remaining. After a tip at the line by senior safety Shaquille Richmond, the ball ended up in Ferguson’s hands. He was off to the races after that, scoring on a 74-yard pick six to get his unit on the scoreboard.

It was a fitting finish for a group that proved it could be KU’s best unit for the 2019 season.

Ninety-six. That’s the number of total games that the first-team secondary of Bryce Torneden, Mike Lee, Hasan Defense, Corione Harris and Ferguson have played in during their KU career. The five players have accumulated a combined 507 tackles for the Jayhawks.

That experience was on display in multiple key moments Saturday night, even though the final score didn’t reflect it.

KU quarterbacks were not afraid to test the secondary with deep throws for much of the night. Most of the time, the Jayhawks’ secondary came out on the right end of those matchups.

Torneden, who settled in at his nickel back position last fall, made multiple stops in the open field during the first quarter. With five-plus minutes remaining in the opening period, Torneden forced a third-and-long attempt after shutting down an outside rush. He kept the edge, making the solo tackle in open space.

Later in that same drive, Torneden tallied a similar stop on the other side of the field on a run that looked destined for a score. Once again, Torneden held the edge and made the tackle after a teammate whiffed on his own attempt.

Other than Torneden’s two stops behind the line in the first quarter, KU’s defensive unit struggled to contain the rushing attack.

The Jayhawks rushed for 454 yards, as four different players recorded a run of at least 38 yards. Takulve Williams, who is listed as a receiver, scored on a 70-yard run. Running backs Dom Williams and Khalil Herbert had runs of 52 and 61 yards, respectively.

But, more often than not, the defense won the battle through the air. KU’s secondary was physical with the larger receivers, playing more aggressive on the line.

In total, the Kansas secondary finished with 14 pass breakups. The Jayhawks recorded 10 in the first half when a majority of members from the two-deep roster competed. Ferguson led the way with three such breakups. Thomas and Torneden each notched two pass breakups.

Not a bad day for a team that knew it was going to lose before the spring game even started.