Getting to know: Rutgers football 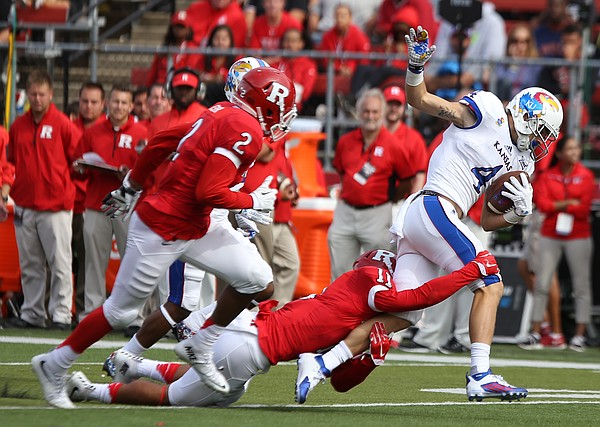 Kansas wide receiver Tyler Patrick (4) is dragged down by Rutgers defensive back Isaiah Wharton (11) after a long gain during the fourth quarter on Saturday, Sept. 26, 2015 at High Point Solutions Stadium in Piscataway, New Jersey. by Nick Krug

After ending a 46-game road losing streak, the University of Kansas football team will look to record a winning streak for the first time since 2011.

Kansas (1-1) notched a 31-7 victory at Central Michigan last weekend, and returns home for the final contest before Big 12 play. Rutgers (1-1) is coming off a 52-3 loss at Ohio State, but the team did win the season opener with a 35-7 victory over Texas State.

“We’ve got a really good opponent who played one of the better opponents I’ve seen on tape in a long time,” head coach David Beaty said. “So don’t put a lot of stock into that score. That is a really good football team that they played and they hit on all cylinders Saturday. The one we’re playing is a talented football team. So we’re going to have our hands full.”

Quarterback — Artur Sitkowski became the first Rutgers true freshman to start the season opener since 2011, completing 20 of 30 passes in his first collegiate start. However, Sitkowski suffered an injury with 22 seconds left in the first half against Ohio State and his status remains uncertain for the game against Kansas, though I imagine he plays based on reports from practice.

Running backs — Raheem Blackshear has averaged 5.5 yards per carry with 331 rushing on 60 career carries for Rutgers. He paced the team with seven receptions against Texas State and leads the team with eight first downs through the first two games. Jonathan Hilliman, a transfer from Boston College, is the team’s most experienced player on the roster with 44 career games, scoring two touchdowns against Texas State in the season opener.

Receivers — Bo Melton led the team in receiving yards for the third time in his career, recording 57 yards against Texas State. He hauled in four passes in the win, which matched his total from 12 games last season. In addition, Rutgers will lean on tight end Jerome Washington, who paced the squad with 28 catches for 282 yards in 2017. Washington earned the top spot on SportsCenter Top-Ten Plays after an acrobatic catch against Nebraska last year.

Offensive line — The Scarlet Knights have trotted out the same five players to start both games on the offensive line. Kamaal Seymour holds down the right tackle spot, while Jonah Jackson plays right guard. On the left side, Nick Krimin handles the guard position and Tariq Cole is starting at left tackle. Michael Maietti, meanwhile, is the team’s starting center.

Defensive line — Elorm Lumor is looking to become the first Scarlet Knight to record a sack in each of the first three games during a season since Marcus Thompson did so in 2013. Kevin Wilkins leads with team with 12 career tackles-for-loss, and has 77 total tackles in his career. Wilkins is one of four players on the team that has played in all 38 games since 2015.

Linebackers — Trevor Morris is the key player on this defense, as he is the league’s leading returning tackler. Last season, Morris finished second in the Big 10 and 18th nationally with 9.8 tackles per game. Deonte Roberts, meanwhile, was second on the team with 104 tackles in 2017. Roberts’ clip of 8.7 tackles per game ranked fifth in the Big 10 and 43rd nationally.

Secondary — Rutgers has plenty of experience in the secondary to support a talented linebacker unit. Blessuan Austin (26), Damon Hayes (11), Saquan Hampton (17), Kiy Hester (20) and Isaiah Wharton (38) have combined for 112 career starts in the defensive backfield. The Scarlet Knights recorded 12 interceptions in 2017, including nine in league play.

SPECIAL TEAMS — Justin Davidovicz converted his first career field goal attempt at Ohio State, in which he drilled a 41-yard kick. In addition, the Scarlet Knights finished fourth in the Big 10 and ranked 18th in the nation on kickoff return defense with a mark of 18.03.

FUN FACT — Since 2009, Rutgers has blocked 50 kicks (field goals and punts) on special teams, which is the most by any team in the NCAA during that span. The Scarlet Knights, who already have one blocked kick this season, have blocked multiple kicks every year since 2007.

VEGAS SAYS… According to Bovada, Kansas is a 2.5-point favorite as of Friday afternoon. It's only the seventh time the Jayhawks have been favored against an FBS team since 2010, according to Tom Fornelli of CBS Sports. In those previous six instances, Kansas is 3-3 straight up and 2-4 against the spread. If you were making me bet this game, I’d take Kansas, but it is very close.

Comments in other articles indicate that multiple DB's for RU are injured and likely replaced by freshmen.

Hope they try to use Pooka in the passing game to get him freed up in space vs. going against their front 7 in their element.