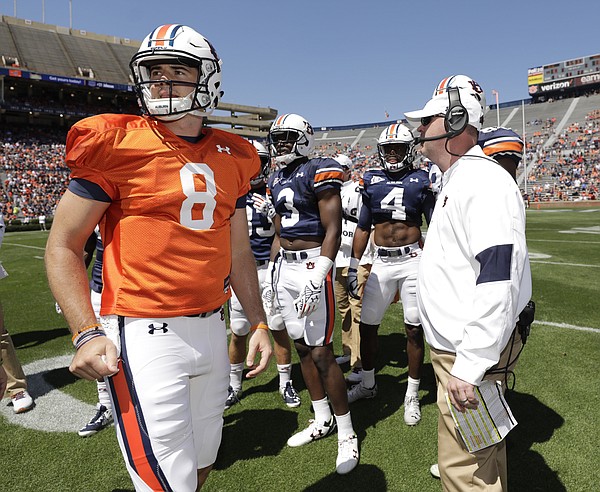 Ever since Les Miles was named KU’s newest football coach, fans have turned their attention to what he will do with his staff.

That has started to take shape exactly 10 days after the conclusion of the 2018 season. AL.com’s Auburn football reporter, Matt Zenitz, reported Monday afternoon that sources told him the former Auburn offensive coordinator is expected to be hired by Miles at KU.

KU made it official Tuesday morning, announcing Lindsey as the team's next offensive coordinator.

Before rising through the college ranks, Lindsey held various coaching gigs at the high school level in Georgia and Alabama.

Worth noting: A Chip Lindsey-led offense has had a better S&P+ rating than #kufball in all but one season via @fboutsiders pic.twitter.com/l31qviQBqm

Here are some notable things you should know about the program’s newest offensive coordinator:

Multiple people have lauded Lindsey for his offensive prowess, particular his ability to develop quarterbacks.

San Francisco 49ers quarterback Nick Mullens, who threw for 262 yards and three touchdowns in his first NFL start earlier this season, has a history with KU’s newest offensive coordinator.

Mullens spent four seasons under Lindsey, two of which came in high school as a junior and senior at Spain Park High in 2011-12, and two more as a sophomore and junior at Southern Miss from 2014-15.

At both stops, the tandem put up numbers together.

As a senior at Spain Park, Mullens was named the Gatorade 2012 Alabama Football Player of the Year after throwing for 3,649 yards (fifth-most in AHSAA history at the time) and 40 touchdowns.

Three years later, Mullens was named the Conference USA Offensive Player of the Year during his junior campaign at Southern Miss after setting single-season program records with 4,476 passing yards and 38 touchdowns.

“The thing about him is, he’s a great teacher. No quarterback is going to line up under center and not have an exact plan of where to go with the ball,” Mullens told the Opelika-Auburn News in 2017. “As long as you can get the ball to where it needs to go under coach Lindsey’s offense, you’re going to be successful. He’s always going to have a detailed plan, and he’s going to make sure that you know that plan.”

It all started at Hoover

Rush Propst, who is the head coach at Colquitt County (Ga.) High, knew Lindsey was going to climb the coaching ladder back in 2007.

Lindsey served as the offensive coordinator for Propst at Hoover High School during the 2007 season.

In the second round of the AHSAA Class 6A playoffs that year, Hoover’s starting quarterback went out with a concussion on the second play of the game. Propst’s nephew Simon, who was just a sophomore, came in and completed 17-of-30 passes for 262 yards and four touchdowns in the win.

"My nephew came in as a 10th grader and we beat a very good Hueytown team that night 44-42,” Propst told AL.com in January of 2017. “That told me right quick that Chip knew what he was doing, because you don't throw a 10th grader into the second round of the playoffs.”

Lindsey received his bachelor's degree in history and English from Alabama in 1997 before becoming a teacher and high school coach at Springville later that year. He then taught social studies at various high schools in Alabama and Georgia over the next decade.

Clint Woodfin, who is now an offensive coordinator at James Clemens, worked on Lindsey’s staff at Lassiter (Ga.) High School when he discovered this passion.

"He's always been into early U.S. history, and that's kind of his passion," Woodfin told AL.com in May of 2017. "He would break down the warfront based on the day.... He would discuss all the different changes and the battle strategies."

It remains to be seen how Lindsey will be as a recruiter at a place like Kansas.

Given his background as a high school coach in both Georgia and Alabama, Lindsey should have a connection in those states. Trying to lure players to Kansas from Alabama or Auburn, though, is obviously easier said than done.

Still, Lindsey demonstrated the ability to recruit in his lone season with Arizona State in 2016.

Lindsey helped the Sun Devils land a commitment from four-star quarterback Ryan Kelley, who was a one-time Oregon commit. Kelley was ranked as the No. 14 pro-style quarterback in the 2017 class, according to the 247Sports composite.

Kelley cited his relationship with Lindsey as a reason for picking ASU, according to the Arizona Republic. Lindsey also helped Arizona State land former Alabama quarterback Blake Barnett, who was a five-star prospect in the 2015 class.

The knock on Miles at LSU was not having a QB. Looks like he is addressing that challenge right out of the box.

I once heard the knock on Knute Rockne was he only won 3 national championships. You just can’t blame fans for finding weakness in a coach, then or now.

That wasn’t a knock on Miles, just pointing out that he is focusing on addressing a key need. It’s actually a compliment, for those who can read.

Hey, how'd the SAE's do in the Rock Chalk auditions? They didn't get in? What possibly could have been the problem?

Dude - are you really bringing in FratRat dancing into a sports thread??? Man card - gone!

What does the landing of Lindsey have to do with graduate transfer Kelly Bryant QB from Clemson? Maybe nothing, Maybe something! Bryant is no longer a shoe-in at Auburn. Could he land in Jayhawkland this week? Hummmmmmmm

If that was to take place, College Football Guru's around the nation would lose their minds (especially in Columbia and St. Louis, MO). 101 ESPN On Air staff have been talking about Kelly Bryant for several months now. So, for Miles and Lindsey to pull off that kind of recruiting miracle, can you imagine what Paul Finebaum and the rest of the ESPN College Football personnel would do? Lollollollol, make it happen Les and Lindsey. Lollollollol......

Bryant is a crybaby who took his ball and went home at the first sign of adversity. Take some lessons from KU QB's in recent years. lost jobs, stuck around. Bryant is Soft! Auburn can have him.

Les got blamed when the O didn't produce with less than elite QBs. Sounds familiar.

It is good that Lindsey has recruited and developed elite QBs. Will be interesting to see what happens with the other coaches and 15 +/- scholarships.

Shane - Thanks for including the ASU #s KU comparisons. Interesting to see that we ranked better 2 years ago than this year.

Kelly Bryant is going to Arkansas

Not hardly. Mizzou, Auburn, or FLA You have no shot at ARK

Oh Yea, Now KU is in the hunt