Paul Pierce immortalized as Boston Celtics retire his No. 34 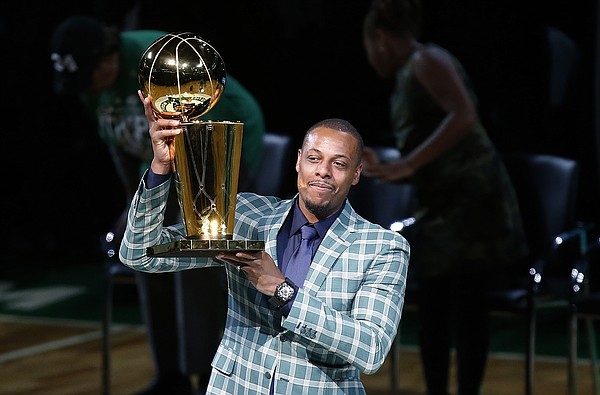 Former Boston Celtics Paul Pierce holds the NBA championship trophy that he won with the team during a ceremony to retire his number following a basketball game against the Cleveland Cavaliers in Boston, Sunday, Feb. 11, 2018. (AP Photo/Michael Dwyer)

From this day forward no member of the Boston Celtics will ever again wear No. 34.

That number will forever be associated with the name Paul Pierce and hang in the rafters above the Celtics’ signature parquet floor, with the likes of Bill Russell, Larry Bird, Robert Parrish and Kevin McHale.

The best NBA player from Kansas since Wilt Chamberlain, Pierce officially became a legend Sunday in Boston, when the franchise with 17 championships retired his jersey.

“Words can’t even describe it right now,” Pierce told reporters on the eve of the ceremony.

“When I got to this day, I was like, ‘It came so fast.’ I remember like yesterday the day Wyc (Grousbeck, co-owner of the Celtics) called me and was like, ‘We want to retire your jersey.’ And I’m like, ‘Really? It happened already?’” recalled Pierce, currently in his first year of retirement. “Just to see and be with all the people who helped me on this journey, to get to this point to where I finally put a close on my career and leave a legacy here in Boston, it’s just good to bring all those people in one room. Because it wasn’t just me by myself to get to this point.”

If you aren't tuned in right now for Paul Pierce's jersey retirement ceremony then what are you doing!? 🤔🤔🤔

Pierce figured the festivities, which followed Boston’s game against Cleveland, would toy with his emotions, and he was right. The 40-year-old who grew up in Inglewod, Calif., played three years at KU under then-coach Roy Williams and became the face of the Celtics for the bulk of his NBA career fought back tears at one point, while addressing cheering fans inside TD Garden.

“If I never make the Hall of Fame,” Pierce said during his speech, “to go up as a Celtic with my number here, that’s probably all I can ever ask for. That’ll be enough. That would be enough for me.” 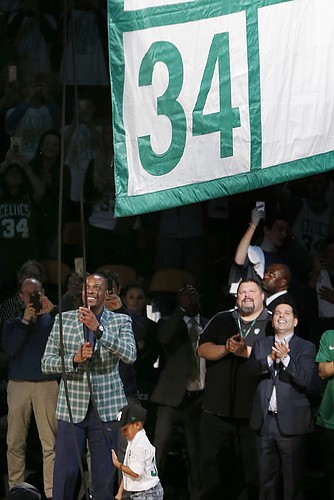 A 10-time all-star and MVP of the 2008 NBA Finals, Pierce’s statistics rank him among the very best to ever wear the iconic green and white of the Celtics.

Only John Havlicek (26,395 points) scored more for the Celtics than Paul Pierce did (24,021) during his 15 seasons with the renowned franchise. 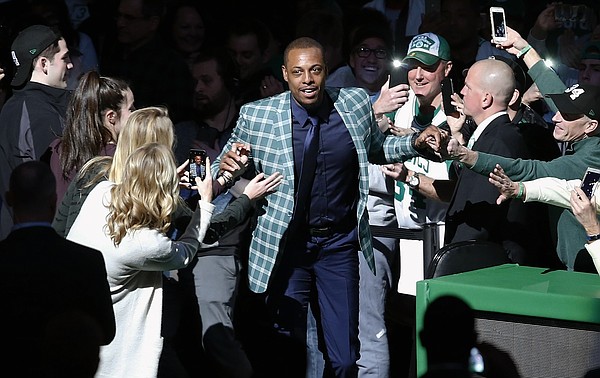 Former Boston Celtics Paul Pierce comes onto the court during a ceremony to retire his number following an NBA basketball game against the Cleveland Cavaliers in Boston, Sunday, Feb. 11, 2018. (AP Photo/Michael Dwyer)

It’s those kinds of numbers that earned Pierce the respect of his peers and former Celtics giants alike.

Congratulations to @PaulPierce34 #TheTruth on a GREAT career! Very proud to have you as part of my @celtics family. Have a great day & embrace the experience. I will see you soon at #NBAAllStar2018 #paulpierce #nba #espn pic.twitter.com/71NKEEFEH6

“One of the greatest things that can happen to an athlete is to retire as a Celtic,” 11-time champion Russell said in a video message to Pierce. “I’m very proud of you, and I’m proud that you were a Celtic.”

Kevin Garnett, who teamed with Pierce and Ray Allen to lead Boston to the franchise’s most recent title, in 2008, remembered Pierce for his swagger and scoring ability.

“Part of trash-talking is backing it up. And I would say his level of trash-talking is about the doing, and him telling you he’s about to do it,” Garnett said in a video tribute. “You hear these tales about Larry Bird — ‘Hey, I’m comin’ down here fixin’ to shoot the 3 right in your face.’ Well, our generation that was Paul Pierce.”

Here are a few of the countless videos and photos dedicated to Pierce’s career and achievement that popped up on his memorable day:

Your browser does not support iframes.

Inglewood made him.
Kansas shaped him.
But he was always a Celtic and that is The Truth.#ThankYouPaul pic.twitter.com/anzr8a6QDl

“This makes it all worth it.” pic.twitter.com/iHf9BqDMva

The Truth reacts to having his number retired ☘️ #ThankYouPaul pic.twitter.com/NWQo5c4Mz5

The Paul Pierce Players’ Tunnel will serve as a reminder to all current and future players of what “being a Celtic” truly means.