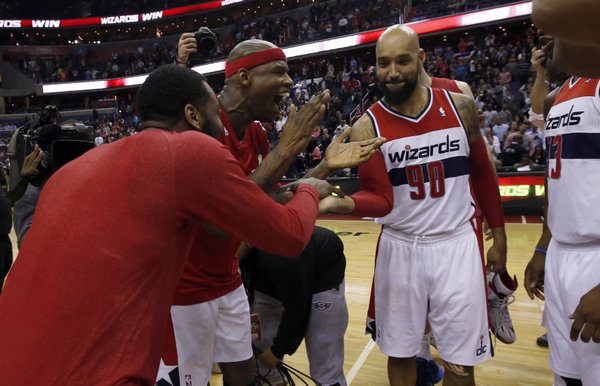 What does an NFL star have to do with the 'Hawks in the NBA? Well, it turns out Rodgers is not only a friend of KU product Drew Gooden, who used to play in the same state as the QB, with Milwaukee, but the Super Bowl MVP is openly rooting for Gooden and Washington in the first-round series between the Wizards and Bulls.

As Rodgers informed the Twitterverse, he would typically cheer for the Bucks or Sacramento (Rodgers is originally from California), but neither made the NBA Playoffs.

So, for now at least, he's all in on the Wizards — and has an autographed Gooden jersey to prove it.

As the playoffs begin, just wanted my tweeps to know where my allegiances are w/the bucks and kings out @DrewGooden pic.twitter.com/YONWYnIhwe

Clearly, Gooden and Rodgers are bros. Brandon Parker provided some of the details on the Washington Post's Wizards Insider blog. Rodgers routinely attends Milwaukee home games, and Gooden said the two of them hit it off when he was a member of the Bucks.

“He’s been one of my biggest supporters once I got to Milwaukee and he’s come to a lot of our games. I became, I guess, his favorite player on the Bucks. He always came to support us courtside and talk to me after the games and text me after the game ‘Good job.’ It kind of escalated from there.”

Rodgers even went all fan boy after the Wizards won Game 1 on Sunday, jokingly calling out Washington coach Randy Wittman for not playing his buddy enough minutes.

Randy plays @DrewGooden 3 mins. Could have been a blowout if he plays drew 10+ min. Come on randy. #midrange #1-0

Imagine Rodgers' outrage when Gooden only played two minutes of the Wizards' 101-99 OT win in Game 2 on Tuesday. Whatever he thought of it, he maintained social media silence on the matter.

Rodgers might soon be forming some more 'Hawks in the NBA connections. The next time he goes to a Bucks game, Milwaukee might be home to a 2014-15 rookie by the name of Andrew Wiggins or Joel Embiid. The Bucks (15-67) owned the worst record in the league, and thus have the best odds to win the Draft Lottery and the No. 1 overall pick.

At least Rodgers got some advanced scouting in on Wiggins and Embiid and will know what to expect. 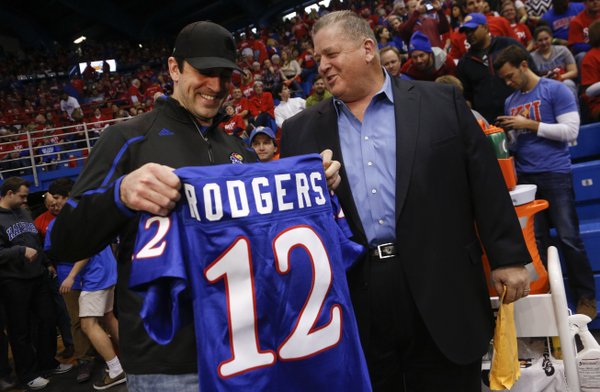 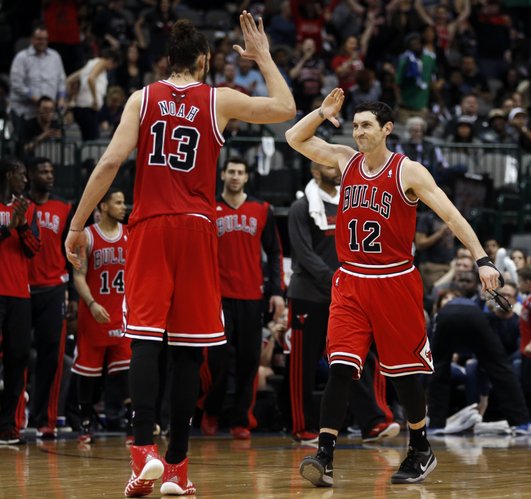 Chicago Bulls center Joakim Noah (13) and guard Kirk Hinrich (12) celebrate at the end of the team's 100-91 comeback win over the Dallas Mavericks in an NBA basketball game on Friday, Feb. 28, 2014, in Dallas. (AP Photo/John F. Rhodes)

Voted the NBA's best defensive player this season, Chicago center Joakim Noah began shouting out other members of the Bulls at a Monday press conference announcing the award.

His first nod went toward Chicago veteran guard Kirk Hinrich, now in his 11th season out of Kansas. Here's what Noah said in Joe Cowley's story for the Chicago Sun-Times:

After losing Game 1 against Washington on Sunday, the Bulls fell behind, 2-0, in the first-round series on Tuesday, dropping a second straight home game.

Hinrich scored 12 points, pulled down seven rebounds and distributed four assists. His exuberant pal Noah again showed support for the vet early in the game when the "old man" tangled with one of the game's up-and-coming players, Bradley Beal.

Hinrich and Beal earned technicals for the shoving match. The play got Chicago's fans back into it and, eventually, the Bulls forced overtime.

Down 101-99 with 2.4 seconds left, Hinrich could have extended the game to double OT. He drove in and drew a foul on a layup attempt, earning two free throws. But Hinrich misfired the first attempt and missed the second one on purpose, aiming to give the Bulls an offensive rebound, which they couldn't secure.

K.C. Johnson of the Chicago Tribune provided the following quote from Hinrich, who knew an and-one would've given the Bulls the lead:

"I was upset. I felt I should have made the layup, to be honest. Just wasn't able to do it. I thought I shot a little quick. But you have to move on and stay confident."

What do you know? Noah defended Hinrich: 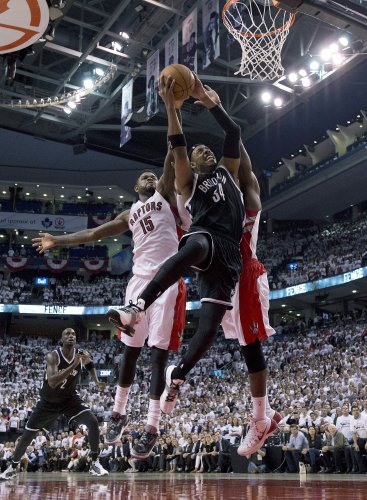 We now know how Paul Pierce turned it on late to lead Brooklyn to a Game 1 win at Toronto on Saturday.

A veteran of the postseason, Pierce told reporters Tuesday morning he can't help it.

Pierce had that confident lean this morning: "(Being clutch) is in my DNA. There's nothing I can do to let it go."

"Everybody don’t have it," Paul Pierce said about being clutch. "Everybody is not born with it. You can’t buy it at Costco or Walgreens."

Hours later, it seemed Pierce might have spoken too soon. The stage was set for him to again emerge as a late-game hero. Pierce subbed in with less than six minutes to go, without a field goal to his name in Game 2, and Brooklyn down three points.

He would miss his first shot of the fourth around the four-minute mark, but quickly redeemed himself with a a mid-range jumper and drew a foul for a three-point play, which tied the game at 83.

After missing a jumper with 2:32 left, Pierce later showed some of that clutch DNA, driving to create another and-one situation for Brooklyn, which trailed by five with a minute to go.

Pierce hit the free throw to cut the Raptors' lead to two, but he missed two three-pointers in the final 30 seconds as Brooklyn lost, 100-95, and Toronto evened the series, 1-1.

After picking up two quick first-quarter fouls that contributed to an unproductive offensive night — Pierce scored seven points on 2-for-11 shooting, with six rebounds, three assists and three steals in 25 minutes — he didn't hold any punches. This is what Pierce had to say in Andrew Keh's game story for The New York Times:

“We were a soft team tonight." 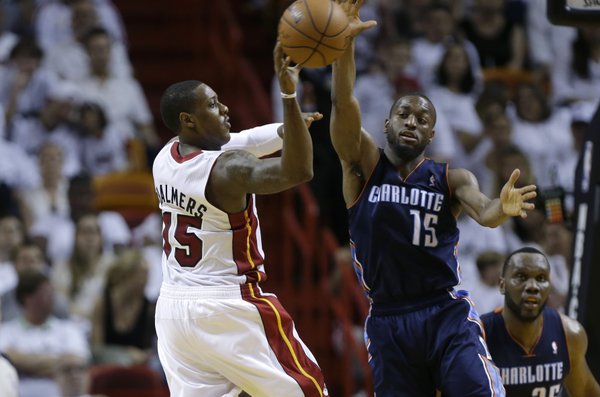 Mario Chalmers could miss Game 2 of the Miami-Charlotte series.

The Miami Herald's Joseph Goodman reported Tuesday that the Heat's starting point guard is questionable for a Wednesday home game against the Bobcats.

Chalmers bruised the knee/shin area on his right leg in Game 1, a 99-88 Heat win in which he shot 3-for-7 and scored seven points in 25 minutes.

The sixth-year guard out of Kansas didn't practice Tuesday and will be re-evaluated before Game 2's shootaround.

Mario Chalmers (right shin contusion) did not participate in today’s practice - all other players did.

“He still has that bruise on his knee and we’ll see how he feels [Wednesday]. He did make progress from [Monday].”

Goodman reported the injury occurred in the first quarter of Game 1, but Chalmers continued playing after the fact.

In 80 career playoff games with Miami — 67 of which came in the past three postseasons, as the back-to-back NBA champions played in three straight Finals — Chalmers averages 9.4 points, 3.1 assists and 1.3 steals.