Devonte' Graham showing no signs of slowing down 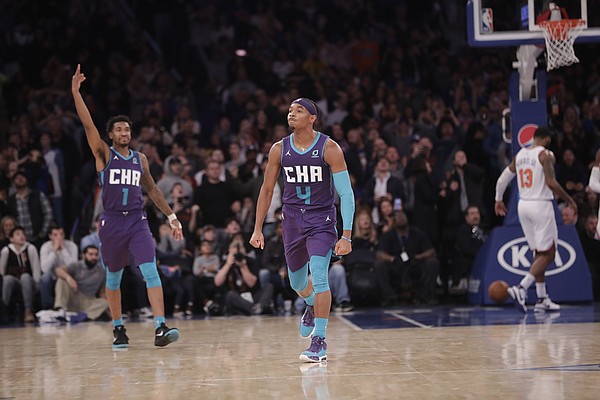 Unless you have been purposefully not paying attention, you surely know by now that former Kansas guard Devonte’ Graham has been among the best players in the NBA to open the 2019-20 season.

Yes, we’ve done one update on Graham’s red-hot start, but he hasn’t cooled off a lick since then. In fact, he’s actually done more.

Whether you’re talking about his ridiculous shooting numbers, team-high assist totals or drilling game winners at Madison Square Garden like his boy Frank Mason once did, Graham’s hot start has continued into the fourth week of the still-young NBA season.

And while that has come as a surprise to many around the league and lots of people in and around Charlotte, the second-year Hornet’s numbers, production and moxie have neither surprised Kansas fans nor KU coach Bill Self.

"He’s killing it,” Self said recently.

Graham leads the Hornets in scoring (18.8 points per game) and assists (7.1 apg) and actually has teamed with fellow-Charlotte point guard Terry Rozier to form a pretty dynamic duo in the Charlotte backcourt.

Heading into the season it seemed as if it would be one or the other, not both, out on the floor for the Hornets this season. But with Graham’s hot start and ability to play both on and off the ball, the Hornets have found a way to make the pairing work well. In fact, playing Graham on the ball, where he ranks in a tie for 10th in the entire NBA in assists per game, has freed up Rozier to be more of a scorer and have less of the burden of setting up teammates and running the offense on his shoulders.

Rozier is currently averaging 16.9 points and 4.7 assists per game.

“It just goes to show you, though, he got in a good situation,” Self said of Graham. “And (for) other guys that don’t get in that good situation that have comparable talent, it’s a hard road. There’s just no guarantees out there unless you’re a definite first-rounder or a lottery pick.”

Good situation or not, timely opportunity or otherwise, Self did not want to leave anyone with the impression that Graham’s numbers have come from the idea that Charlotte just had to put someone on the court and it happens to be Graham.

Confidence has a lot to do with it, and KU fans know very well that that’s never been an issue for the former KU All-American and Big 12 Player of the Year.

From the day he stepped foot on campus and contributed as a freshman to his significant roles during his sophomore, junior and senior seasons, Graham always had a strong dose of that it factor.

“I’m happy for him,” Self said. “Whatever comes his way that’s positive, he certainly deserves all of it.”

Hit the game-winner and knocked down 9 threes at MSG. pic.twitter.com/DNxIsB80Qs

AWESOME! so happy for Devonte!

Couldn't happen to a better, hard working kid. What a great ambassador for the University. Rock Chalk