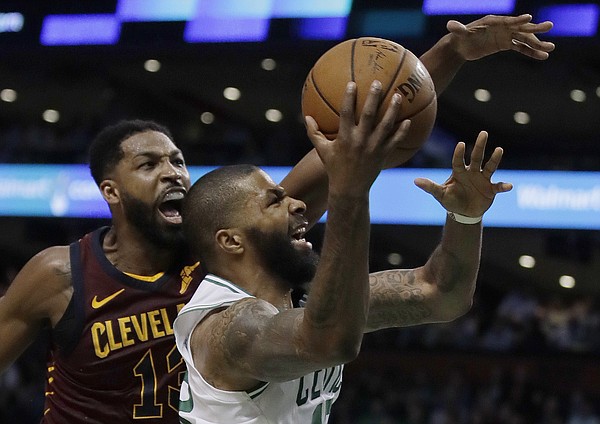 Boston Celtics forward Marcus Morris drives to the basket against Cleveland Cavaliers center Tristan Thompson, left, during the second half in Game 2 of the NBA basketball Eastern Conference finals Tuesday, May 15, 2018, in Boston. (AP Photo/Charles Krupa)

After a physical Game 2 in the conference finals, Cavaliers coach Tyronn Lue described how Boston took a 2-0 lead.

“I think they're playing tougher than we are. We see that,” Lue said. “They're being physical. They're gooning the game up, and we've got to do the same thing. We've got to be tougher, mentally and physically.”

When media members presented Lue’s assessment to the Celtic who exudes his tough guy persona constantly on the court, Morris liked what he heard.

“Gooning? That’s a good word,” Morris told the Boston Herald. “(Expletive), we’re doing what it takes. Whatever it takes, every player 1-15, whatever it takes, that’s what we’re doing. You call it what you want to call it. We’re just trying to get the win.”

While Morris didn’t replicate his double-double production from Game 1 versus Cleveland, the former Kansas standout played a key role in a playoff victory yet again, contributing 12 points, 5 rebounds and 3 assists. Boston trailed by 7 at halftime before making a critical run in the third quarter. Morris came through with some timely plays during the push, including a 3-pointer that cut the Cavs’ lead to 2 less than four minutes into the second half and a crowd-igniting and-1 that tied the game at 69.

The seventh-year forward attacked Tristan Thompson off the dribble, and after drawing a foul that sent both bigs tumbling onto the baseline out of bounds, Morris roared in Thompson’s face while flexing.

The sequence quickly became a meme on NBA Twitter, but more importantly for the Celtics, it seemed to fuel the rest of the quarter, as the home team out-scored the three-time defending East champs by 14 in the third, paving the way for a 107-94 win.

None by Taco Trey Kerby

As expected, the Celtics weren’t able to relatively shut down James in Game 2 after Morris and his “gooning” band of long, strong wings held the league’s brightest superstar to 15 points in Game 1. James torched Boston for 21 first-quarter points Tuesday and finished with 42.

However, Morris once again held his own when defending James. A change in Cleveland’s starting lineup meant Morris didn’t draw the assignment as often in the second go-round. Still, the numbers showed afterward that Morris’ defense impacted James’ effectiveness. Per ESPN, James scored 6 points on 2-for-8 shooting with 2 turnovers when guarded by Morris.

Marcus Morris has been one of the few players who can slow down LeBron James. In two games, James has only 11 points on 4-14 shooting when being defended by Morris pic.twitter.com/UuPqxsF1vv

Now a Boston team without its two best players, injured Kyrie Irving and Gordon Hayward, needs just two more victories to reach The Finals. But Game 3 in Cleveland isn’t until Saturday, and James has plenty of time to figure out ways to better carve up the Celtics’ defense.

Morris described his group as “very confident” at this juncture of the series.

“But we’re gonna stay humble, man,” he added. “The work is not done. We up 2-0. But we done seen crazier things happen. The goal is to go to Cleveland and at least steal one and come back and play in front of these great fans.”

📽️ @MookMorris2 after the #Celtics game 2 win over #WhateverItTakes pic.twitter.com/La3VPZaEuQ

Finish them off Boston! Great job Marcus, on the D! :)

Can't help but wonder if Marcus was thinking back to the 2011 game where UT with Tristan Thompson got a win against us in AFH, breaking the home winning streak.

If memory serves, the Jayhawks were up all night consoling Thomas Robinson after he learned he'd lost a 3rd family member in the span of a few weeks. They started strong, but lost steam late in the 1st half. Emotional game.

If I remember correctly, the whole team had a sleepless night, which explains the lost steam in the later part of the game.