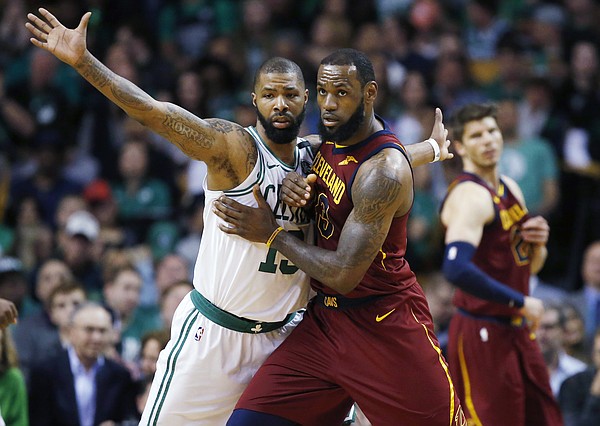 So plenty around The Association likely recalled their favorite eye-roll meme or GIF when Marcus Morris stated his belief leading up to Boston’s Eastern Conference Finals series with Cleveland that he’s “probably the best guy defending (James) in the league, outside of Kawhi (Leonard.)”

Prior to this postseason, Morris had experienced exactly four NBA playoff games since leaving Kansas for the pros in 2011. Tactfully, Morris at least made it clear while discussing his matchup with the four-time league MVP, aka “King James,” that it would take a full team effort to try and defend “the best player in this game.”

Surprisingly, at least in the aftermath of Game 1, Morris’ predictive assessment didn’t look completely insane. He started for the first time this postseason specifically to match up with James, and the Celtics took a 1-0 lead as the man who has played in seven straight NBA Finals registered personal 2018 postseason lows with 15 points, 31.3% shooting and 7 turnovers.

“It's a team effort, man,” Morris replied. “It's not just me. Everybody played their part in guarding him. He's obviously the best player in the game, and you need multiple guys and a team to guard him an entire game. I just think we did a great job of that.”

While that appraisal seems dead on, ESPN’s Chris Forsberg shared some interesting advanced data on Morris vs. LeBron, via Second Spectrum. Morris defended James 39 times — the most of any defender — during Boston’s 108-83 win. The Cavs averaged 89.7 points per 100 possessions when Morris defended James, compared to Cleveland’s postseason average of 108 points per 100 possessions.

Marcus Morris defended LeBron James 39 times in Game 1, the most among any Celtics defender, per Second Spectrum.

None by Chris Forsberg

Morris said he looked forward to guarding James because of his competitive nature, and that “I’m going to be able to tell my kids this one day.” But the seventh-year forward didn’t necessarily notice a change in James’ approach because of the way he and Boston went about defending one of the game’s all-time greats.

While James didn’t dominate inside the way one might assume, his ability to attack the paint was hindered somewhat by the Cavs’ poor 3-point shooting (4 of 26). Obviously, Boston coach Brad Stevens wasn’t about to anoint Morris and his teammates as LeBron-stoppers.

“Marcus is one of our leaders, and he's been a presence since the first day he got here,” Horford said of his 6-foot-9 teammate, still in his first season with Boston. “So I think that taking on this challenge is something that we expect out of him. We have his back out there. Like he said, we're doing it as a unit. It's not all on him. But you do have to give him credit for his focus and his commitment for the team.” 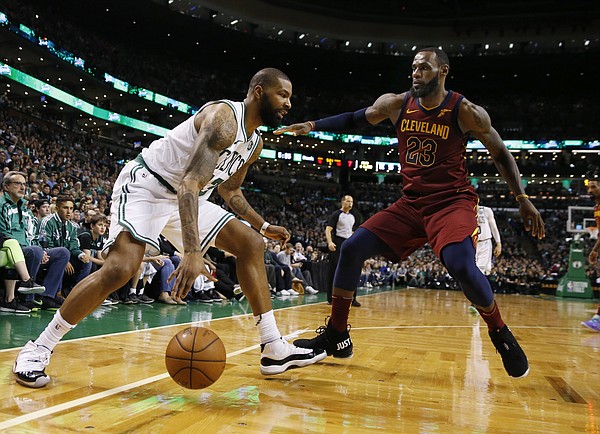 Could Morris be the man who keeps James from reaching his eighth straight NBA Finals? Probably not. I mean, why would anyone even ask that question or type it out?

The King, likely waiting to unleash countless retaliatory plays the remainder of the series, complimented his adversary following the Cavs’ loss.

“I thought they had great game plan Game 1. He was the start of it. He was my matchup, and I think they did a great job of communicating throughout the whole game, knowing where I was and knowing where our teammates was,” James said. “Brad and the coaching staff did a great job in Game 1. You commend that. We have an opportunity to look at a lot of film (Monday), and see ways they were making us uncomfortable, making myself off balance and not have a rhythm all game. So we'll be much better in Game 2.”

James added the first game of any series always doubles as a “feel-out game” for him, so he will adjust to the Celtics’ defense accordingly.

Translation: Morris might require the aid of all the leprechauns in TD Garden to get out of another game this series relatively unscathed by LeBron.

LeBron has become a whining crybaby just like Kobe did at the end of his career. Go Marcus! Make him cry!