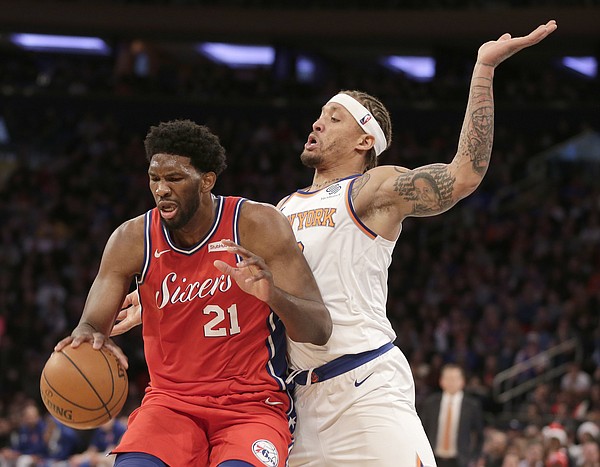 For the first time since Wilt Chamberlain’s final season, in 1973, the NBA’s All-Star Game will feature a Kansas Jayhawk in the starting lineup.

The league announced the five starters from each conference Thursday evening, and second-year center Joel Embiid landed the third frontcourt position in the East.

Cleveland mega-star LeBron James led all Eastern Conference players, with more than 2.6 million fan votes, followed by Milwaukee’s Giannis Antetokounmpo, who had more than 2.5 million. But Embiid, with more than 1.2 million fan votes beat out New York’s Kristaps Porzingis in that category. The selection process also incorporated media and player voting. Embiid finished third in voting among those who cover the NBA, as well, while his peers only provided him with 94 player votes, six behind Porzingis’s 100.

Embiid won’t necessarily team up with “King James” and “The Greek Freak,” though, at next month’s exhibition, in Los Angeles. A new format for the annual spectacle will have a captain — the leading vote-getter — from each conference draft a team of his choosing. After all 12 all-stars from each conference are unveiled, James and Golden State’s Steph Curry will select their teammates, beginning with the pool of starters that were announced Thursday.

Here are the starters from each conference: James, Antetokounmpo, Embiid, Kyrie Irving and DeMar DeRosan, from the East; Curry, James Harden, Anthony Davis, Kevin Durant and DeMarcus Cousins, from the West.

Reserves are voted upon by NBA head coaches and will be announced Tuesday. This coming Thursday, the rosters, as drafted by James and Curry, will be unveiled.

Embiid is the first all-star from Kansas since Paul Pierce, who last made it in 2012. Pierce was a 10-time NBA All-Star but never voted a starter.

Plagued by injuries from the time Philadelphia drafted him third overall in 2014, Embiid already this season has matched his total games played from his rookie campaign a year ago (31).

Embiid’s 23.8 points, 10.8 rebounds, 3.4 assists and 1.9 blocks in 31.3 minutes a game make him one of the NBA’s elite centers and an easy choice to represent the Sixers at All-Star Weekend.

You know, the complete lack of a cantankerous presence like jaybate or Jay Scott?

(Congrats, Joel! You done us PROUD.)

What ever happened to Jaybate? I miss his novels.

Seriously? I thought the Truth was an AS starter, too? Congrats, either way...!!