After slow start to rookie season, Josh Jackson beginning to take off 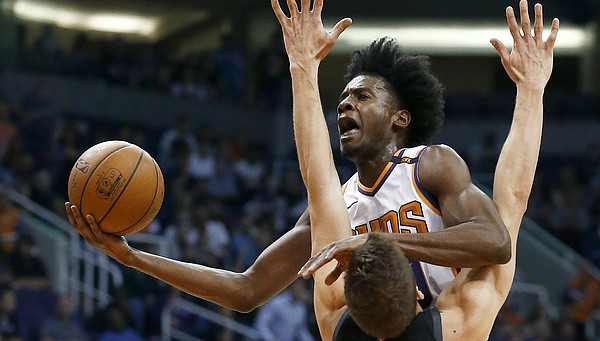 Over the first few months of what will undoubtedly be a long career for Josh Jackson, little was heard from the NBA rookie in Phoenix.

Playing for one of the worst teams in the league in a non-major market will do that to you, especially when your production doesn’t immediately take off.

Jackson’s rookie season hit rock bottom the first week of January, when Suns coach Jay Triano benched him — as in didn’t play the 6-foot-8 forward a single second — in a game against one of the NBA’s other poor teams, Atlanta.

“It was kind of hard to take in,” Jackson told The Arizona Republic in January. “I kind of really didn’t understand what he was saying.”

According to Scott Bordow, The Arizona Republic, the explanation given to the 21-year-old at the time included presenting Jackson with some harsh statistics. Before he was benched, the Suns had a 97.4 offensive rating with him on the court and played nearly 10 points per 100 possessions better without him, at 106.7. What’s more, Phoenix’s defense with Jackson (111.3 rating) was worse than when he wasn’t on the floor (106.6).

Jackson didn’t take the message or the benching lightly.

“Now we kind of have a schedule where, every week, I’ll come in and we’ll watch film or just talk about things that happened in the previous games and practices just for me to get better,” Jackson told The Arizona Republic of how he responded to Triano.

As detailed by Bordow at AZCentral.com, Jackson has at times looked like a much different player since watching that game against the Hawks from the bench. In his past 19 games, Jackson is averaging 14.2 points, 5.3 rebounds and 1.5 assists, and making 44.2% of his shot attempts, as well as 30.1% of his 3-pointers.

No, Jackson hasn’t become flawless. There was his 0-for-13 shooting night versus Houston in late January and a 4-for-18 outing at Golden State in the week leading up to the all-star break. But he also has scored 20 or more points in four of Phoenix’s six games in February and resembled a young franchise cornerstone instead of a slumping rookie. Thus far this month, he’s shooting 45% from the field — just 26.9% on 3-pointers, though — and averaging 17.4 points, with 6.1 boards and 1.4 assists.

In a loss to Denver Feb. 10, Jackson became the first NBA rookie to put up 20-plus points and four-plus rebounds, assists and blocks in the same game since Anthony Davis.

.@j_josh11 is the first @NBA rookie with 20+ points and 4+ rebounds/assists/blocks since Anthony Davis and the first @Suns rookie since Shawn Marion! #SunsAt50 pic.twitter.com/CRhF1rm7nm

He entered the all-star break on a high note, too, putting up 22 points on 10-for-15 shooting against one of the league’s most respected defensive teams, the Utah Jazz.

Jackson with the one-handed tomahawk jam to tie the game. #SunsAtJazz pic.twitter.com/fBxsEoFkHF

As he gets more comfortable facing NBA defenders Jackson is becoming a better finisher. And the Suns need him to be. Of his 247 made field goals as a pro, 133 of them have come from within 5 feet and in, per stats.nba.com.

He has shot 54.5% from that range on the season, but his percentage around the basket is up to 61.3% since Triano took his playing time away.

None by FOX Sports Arizona

Side-to-side slide to the net! pic.twitter.com/8mdXKGlXbj

Jackson displayed during his one season at Kansas the ability to defend, finish a stop or force a turnover, push and finish at the other end in a matter of seconds. At times, such versatility has translated to the NBA, as well.

None by FOX Sports Arizona

A student of the game, Jackson is learning and adjusting in his rookie season. Teamed with young Suns star Devin Booker, expect to hear much more from the 2017 lottery pick in years to come.

Go get em Josh!!! Sure wish you were still playing for Jayhawks...one of my all time favorite players.

could you imagine the enthusiasm and talking of the team if he would've stayed this year. him and devonte would be unmatchable. i'm sure 100% of us are happy for him taking off early for that kind of pick position.

Great to see him at the game the other night.

I'd love it if the LJW would put up the "Hawks in the NBA" column on a regular basis again.

One of my all-time Jayhawk favorite! I look forward to watching him in the TSRA again soon. He is so fun to watch, always.

The Suns need center and point guard talent very badly. Hopefully for Josh's continued improvement, these pieces will come in this year's draft. Maybe a trade with the Kings for Mason III. I see Frank's been sidelined with a nagging injury [foot?] since January. Those two guys together are about as tough as it gets. Just don't get to see either very often on TV.

Basketball-wise, he left too early. Physically and mentally, the NBA is a tough grind. Josh would have been much better off waiting a year and working with Self and Hudy, but if someone had offered me $3 million to leave KU as a freshman, rock chalk, I will see you later too.

Brad answered his question. When you can get a bundle of green stuff like way over 3 million best to accept that stuff.

I've always thought that Josh Jackson would become a star in the NBA. This might be the first time in his life that he has had to fight for minutes on the court. It's a learning experience that will only make him better.