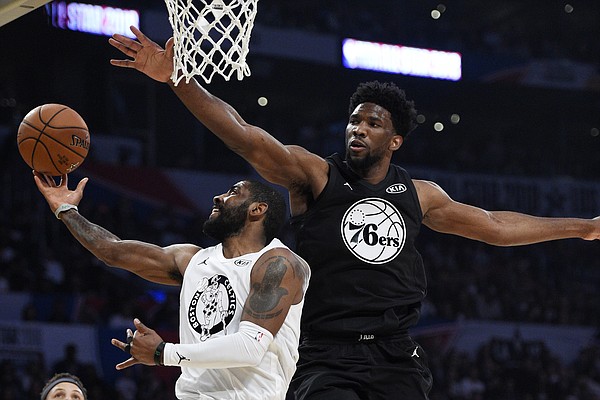 When Joel Embiid arrived in Los Angeles for the NBA’s 2018 All-Star Weekend, the biggest achievement of his career to date brought to mind the not-so-long-ago state of his basketball existence.

Foot surgeries and the resulting rehab robbed Embiid of two full seasons after Philadelphia made him the No. 3 overall pick out of Kansas in the 2014 draft. Now he’s clearly one of the league’s top big men.

“It’s really special. You guys called me a bust when I missed those two years,” a smiling Embiid told reporters ahead of starting for Team Stephen in Sunday night’s showcase. “But I worked really hard and went through a lot, missing those two years, losing my brother (Arthur, who died in 2014). I wanted to quit basketball, and it was hard being away from the court. But I’m glad I just kept pushing.”

The first player to represent KU in the all-star game since Paul Pierce in 2012 and the first Jayhawk to start in one since Wilt Chamberlain in 1973, Embiid looked right at home. The Sixers center scored 19 points on 8-for-13 shooting, grabbed 8 rebounds and blocked 2 shots in 20 minutes.

It wasn’t two-time NBA MVP and team captain Stephen Curry or scoring machine James Harden, but the versatile 76ers center who produced the game’s first basket, throwing down a two-handed jam and drawing a foul for a quick three points. Embiid kept it going shortly thereafter with a smooth jumper outside the right elbow, giving him the first 5 points in a matchup of the world’s elite basketball players.

Sixers fans, coaches and management might have cringed a little when Embiid collided with LeBron James while going up for a defensive rebound in the first quarter, but the 76ers big with an injury history survived just fine.

Following a lengthy break on the bench, Embiid returned in the second quarter to deliver one of the first half’s oohs-and-ahhhs-inspiring sequences. The center, in a span of seconds, splashed a 3-pointer from a few feet behind the arc, then got back on defense to deny Russell Westbrook of a layup, with a blocked shot at the rim.

#JoelEmbiid is TRUSTING THE PROCESS at #NBAAllStar! ☝️ pic.twitter.com/eXWlJDIXDi

“That’s the age of the new NBA,” Curry said during a halftime interview on TNT, when asked about Embiid both providing some spacing on the floor and protecting the rim. “Everybody can stretch the limits a little bit, and he’s one of them. I like to see it. I like his confidence, I like his swagger and I’m glad he’s on my team.”

Averaging 23.7 points, 11.1 rebounds and 1.8 blocks in 31.4 minutes during his second season with Philadelphia, Embiid remained active in the second half, coming through with an easy dunk and his second 3-pointer of the night in the opening minutes of the third quarter.

After observing for another long stretch, Embiid returned to a one-possession game with 4:24 remaining in the fourth quarter. Always assertive offensively, the extended rest didn’t impact his approach. Embiid scored a reverse lay-in over Kevin Durant with 3:10 to play, giving Team Stephen a three-point advantage.

Near the 2:00 mark, following a defensive switch, Embiid navigated a one-on-one with Kyrie Irving successfully on the perimeter, contesting a missed 3-pointer. On offense, he proceeded to attack LeBron James from the high post and bank in a little right-handed jump-hook for a 144-141 lead.

Although James quickly got his revenge in the form of a game-tying 3-pointer over the Philly center, in the final minute Embiid didn’t let Paul George score a go-ahead layup on his watch, blocking the Oklahoma City forward inside.

With Team LeBron using no traditional big men in crunch time, Draymond Green replaced Embiid with 40 seconds left. Team Curry, put Embiid back on the floor for the final offensive possession, but couldn’t get off a would-be game-tying 3-pointer. Team LeBron won 148-145 and James, with 28 points, 10 rebounds and 8 assists, took home the MVP trophy.

It was a busy weekend for Embiid, the 7-foot-2 center from Cameroon, who made a brief appearance in the Rising Stars exhibition on Friday, scoring 5 points in 8 minutes.

The 23-year-old said beforehand he didn’t want to play too much in that game made up of first- and second-year players, preferring instead to let the “young guys” shine.

Some wondered how much a sore ankle that sidelined Embiid in the Sixers’ final game before the all-star break would limit him in L.A. But Embiid, who said the words “minutes restriction” don’t exist for him in Philadelphia anymore, competed in Saturday’s Skills Challenge, too.

After beating Boston’s Al Horford in a race up and down the court that incorporated dribbling, passing and shooting, Embiid lost out on a chance at the event’s final round when Chicago rookie Lauri Markkanen knocked him out.

All smiles for @MarkkanenLauri as he tops @JoelEmbiid in the 2nd round of #TacoBellSkills! 😂 pic.twitter.com/8zQZZRUqQy

The first two nights didn’t carry the prestige of Sunday’s main event. So it was no surprise the driven Embiid used that stage, playing with and against the NBA’s best, to really flash his array of abilities.

Not that all-star appearances are the measure Embiid plans on using to gauge his career success.

“Now that I’m here I’ve still got a long way to go,” Embiid said during his first of what could be many all-star weekends as the face of the Sixers. “I’m not anywhere close to where I want to get. But now that I’m here it’s sweeter being an all-star starter, too, for the first time. So I’m excited.”

#InsideStuff takes the show on the road in Los Angeles where @realgranthill33 visits with #NBAAllStar @JoelEmbiid of the @Sixers! pic.twitter.com/frvf6FSkHE

Embiid looked great in this game...he's an absolute monster.

It's really hard to believe that it's been 45 years since a Jayhawk started in an ASG. Obviously it makes sense when you think about it, but to me it's just weird to think that, until this year, schools like Auburn, Louisiana Tech, Marquette, Davidson and Centenary College had more ASG starters in the last 40 years than an elite program like Kansas!

When you put all those conditions that restrict the answer to 1, it's really not hard to believe at all.

Still hurts a bit to think about what we missed at the end of his season.