Nick Collison 'coming up on the end' of his NBA career 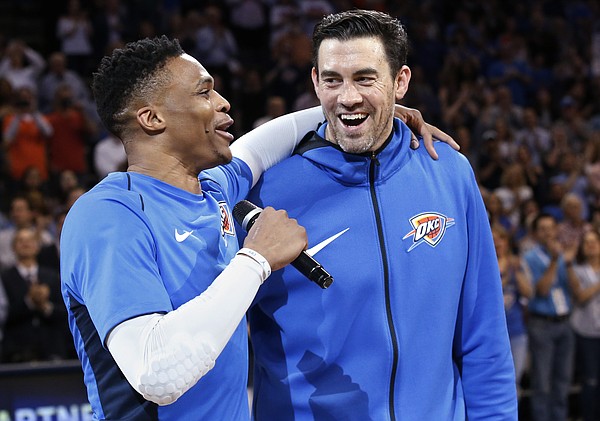 Months from now, when Oklahoma City begins its preparations for the 2018-19 season, the Thunder could be doing so without Nick Collison for the first time in its existence.

Drafted 12th overall in 2003 following a stellar four-year college career at Kansas, Collison played four seasons with Seattle before the franchise relocated to Oklahoma. He admitted this weekend, following the Thunder’s season-ending loss to Utah in the playoffs, he had no idea as a 22-year-old he’d stick in the NBA for so long.

“No, I don't think I ever thought I'd be able to be playing with partially gray hair,” Collison joked during the team’s end-of-season press conference. “I’m starting to get some. At 37 years old, no, I wouldn't think I'd still be playing at 37. I've been really blessed. I've had a lot of really good people around me. I've worked hard at it, too, and things have gone my way. I'm very thankful for the career I've had.”

There’s a chance this just-completed season, his 14th with the franchise that drafted him (Collison missed the 2003-04 season due to injury), will be his last. The 6-foot-10 power forward only appeared in 15 games for the Thunder during the regular season. He didn’t even check into a playoff game for OKC either of the past two postseasons.

Collison has contemplated retiring “a lot,” he admitted, but said he didn’t want to rush to judgment a day or two after the season ended.

“I’ll probably just take some time, talk to my family, talk to my agent, talk to the team a little bit, and go from there,” Collison said. “But I've thought about it. There's no question I'm coming up on the end. It's close.”

Determining factors in his retire-or-keep-playing verdict, Collison said, include deciding what he wants to do with his time, life and family, as well as “just how I want to spend the future, the next year, and go from there.”

Whether his playing days officially conclude in a week or a year, Collison hasn’t figured out yet exactly what retirement will entail for him.

“I think there might be something in basketball I can do, but I'm not going to do that and not spend enough time with my child and stuff with my family,” Collison said. “I’ve been playing for a long time, and it's taken a lot of my time and energy and focus for a long time. So I think getting that stuff in order is the most important thing and then go from there, figuring out kind of what would be good for me.”

Collison played a career-low 75 minutes at the age of 37. His on-court role has steadily declined since 2012, his last averaging 20 minutes per game. OKC re-signed him to a one-year contract this past off-season primarily due to his renowned locker-room presence. 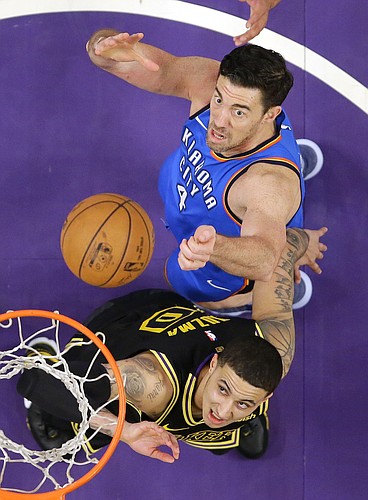 Though he played sparingly, scoring a season-high seven points in six minutes of a March win over Sacramento, Collison knew what his role would be coming into the season.

“I enjoyed being on a team and practicing, trying to help out. The few cameos I got were fun, in the games,” Collison added. “We would have all liked to continue to be playing and had a year where we could compete for a championship. It didn't happen, but it's a blessing to play in the NBA and to be on a team. So, yeah, I definitely enjoyed the year.”

The Thunder, headlined by Russell Westbrook, Paul George and Carmelo Anthony, finished 48-34 in what might be Collison’s final year, securing the No. 4 seed in the Western Conference before bowing out to the Jazz in the first round, 4-2.

“Yeah, it was frustrating at times this year,” Collison said. “I think we kept waiting for us to really hit our stride, and it wouldn't happen really for long enough stretches that we needed it to. First thing, is it's a tough league. I mean, Western Conference, incredibly tough, and we got home-court advantage. It's not easy to do. But I think everybody would have liked for us to have things go a little bit better. You know, there's a lot of new players. It does take time.”

Considering Collison has spent the past decade around OKC’s polarizing superstar, Westbrook, he knows him just as well as anyone in the NBA. Asked how he felt about some of the narratives surrounding Westbrook, such as former teammates benefiting from moving on to other teams and playing without Westbrook, Collison described the all-star point guard as a “great” teammate.

“You know, when he got here, we were a bad basketball team, and we got better, and we've become a really good team for a really long time, and he's got a huge part — he has a lot to do with that,” Collison said. “I love playing with him, and he's an all-time great to me. I don't care what anybody else says. I think he's been huge for the city, this organization and all the guys I play with, and myself.”

Time will tell whether Collison will be back for another go-round with Westbrook and the Thunder.

Billy Donovan greatly underutilized Nick Collison. The man can still play! He's still quick in the post, can hit the mid-range jumper, and sets the best picks on the team. He's a little slow on defense now, but when he's in, he gives 100%. Not all of the Thunder's players can say that. From a developmental standpoint, I understand why Donovan elects to go with younger guys in the rotation. But every time Nick gets in to the game, the crowd gets into it. It's as if even the players on the floor are energized from his presence. Nick has always been a team player, though, and never lobbies for playing time. Stats or no stats, he will have his jersey hung in the rafters.

A future in coaching?

Hopefully as the big man coach at KU, like Danny Manning before him.

That's an interesting thought. Doubt Nick wants to jump into another career too quickly,

Collison played on some of Roy's best teams at KU. He's someone who cheering for has always been easy.