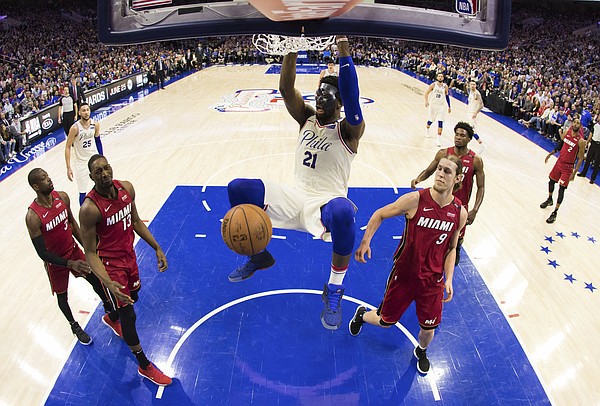 In this photo taken with a fisheye lens, Philadelphia 76ers' Joel Embiid, of Cameroon, dunks the ball during the first half in Game 5 of a first-round NBA basketball playoff series against the Miami Heat, Tuesday, April 24, 2018, in Philadelphia. The 76ers won 104-91. (AP Photo/Chris Szagola)

He told you to trust the process. Why didn’t you believe him?

In just his second year competing at the NBA level, Joel Embiid has helped Philadelphia, a team that owned a 0.191 winning percentage in the three seasons before his debut, reach the second round of the playoffs.

The game-changing center who spent one shortened season at Kansas returned to the Sixers’ lineup against Miami with their first-round series tied at 1-1. The Heat failed to win a game with Embiid on the floor, and a franchise that was the butt of copious jokes as recently as a year ago eliminated one of the league’s most respected organizations, Thursday night. Embiid’s 19 points on 8-for-14 shooting, with 12 rebounds and 2 steals fueled the final blow of a 4-1 series victory.

“Two years ago, we won 10 games,” Embiid, who missed the first two seasons of his career due to injuries, told The Inquirer. “To get in this position, I’m just excited. Playing through adversity and everything that’s happened to me, I’m just blessed.”

The Sixers await the winner of the Boston-Milwaukee series in the Eastern Conference semifinals, a round Philly now projects to reach with ease for years to come.

“This is the future of the NBA,” Heat veteran and future hall of famer Dwyane Wade told reporters after the 76ers sent Miami home. Wade added the league is in “good hands” with Embiid and rookie point guard extraordinaire Ben Simmons.

In fact, in many NBA circles Philadelphia isn’t even considered a team to reckon with a year or two from now. Given the landscape of the East — top seed Toronto is tied 2-2 with No. 8 seed Washington, LeBron James’ Cleveland Cavaliers are tied 2-2 with Indiana, and Boston, though up 3-2 on Milwaukee, doesn’t have injured all-stars Kyrie Irving or Gordon Hayward — the Sixers, some say, have as realistic a shot as any team to advance out of the Eastern Conference.

As you might have guessed, Philly’s boisterous center agrees.

“I think we have a chance to go to The Finals,” Embiid said during an on-court interview with ESPN following the victory, when asked how far Philadelphia could venture this postseason.

Embiid has played in just 94 regular-season games in his injury-shortened career, but the No. 3 overall pick in the 2014 draft only looks muddled in the playoffs when the mask protecting the orbital bone he fractured last month affects his vision or comfort.

“I promised the city this, and I’m just excited,” Embiid said following his home-court postseason debut.

“I think we have a special team,” he added during his post-game press conference. “You know, we’ve got a lot of talent and they’re all good guys. We love each other. We love playing with each other. So I feel like we play the way we want to play, and that’s sharing the ball and being the best defensive team in the league. We feel like if we move the ball we can get whatever we want to, so that’s the goal and we’re going to do everything to get there.”

Few believed a year ago such a scenario was possible, but it’s true. The recently forlorn Sixers could win not one, but multiple playoff series this spring.

And this team that has won 20 of its previous 21 games just may be good enough to reach The Finals. Is that possible?

As the headline in today’s Inquirer read: “Yes, Indiid!”

None by Philly.com Sports

Joel Embiid picking Kevin Hart up like he was a child after the Sixers eliminated the Heat is priceless 😂pic.twitter.com/RLrA8hvYmn

None by Sports Illustrated

I love Embiid. He's my favorite player in the NBA right now. I've gotten to attend two games at AFH and they were both during the 2013-2014 season (same weekend). My brothers and I bought our flights before the season thinking that we were going to be witnessing the next great Jayhawk in Andrew Wiggins. What we didn't realize was that Embiid was going to be the real treat (Embiid dominated in both games while Wiggins had his worst game of the season and a very average game after that). We got to meet Embiid and have our picture taken with him in the concourse after one of the games. I hope that he can stay healthy and go on to be one of the greatest centers in NBA history.