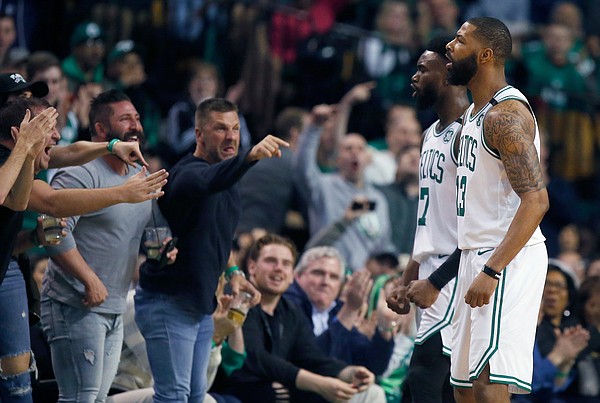 Fans react after Boston Celtics' Marcus Morris (13) was fouled while shooting during the first quarter of Game 1 of an NBA basketball first-round playoff series against the Milwaukee Bucks, in Boston, Sunday, April 15, 2018. (AP Photo/Michael Dwyer)

Under other circumstances Boston would not need much production out of Marcus Morris in order to advance in the NBA Playoffs.

But injuries to the two best players on the roster, Kyrie Irving and Gordon Hayward, mean it’s all hands on the parquet floor for the Celtics, and Morris, the group’s current sixth man, is as crucial to the team’s longevity this spring as anyone.

Although the former Kansas standout has been in the league since 2011, Boston’s Sunday meeting with Milwaukee marked just the fifth playoff game of Morris’ career. Even so, the 6-foot-9 forward’s savvy play and late-game baskets proved vital to a 113-107 overtime victory.

Game 1 of the opener might not have got to OT without Morris’ crunch-time play. In the final five minutes of regulation, Morris drove for a successful reverse layup, later tipped in his own miss, fed Terry Rozier for a 3-pointer, hit a contested step-back jumper and drew a charge on Bucks superstar Giannis Antetokounmpo.

A sub in name only, Morris played 35 minutes as a reserve, essentially serving as the fifth starter, instead of center Aaron Baynes, who logged 15 minutes.

With 21 points on 8-for-20 shooting, Morris nearly out-scored Milwaukee’s entire bench (23), and joined Al Horford, Rozier and Jaylen Brown as 20-point scorers for the Celtics. Morris also grabbed 7 boards and connected on 2 of his 4 3-pointers.

“We all played well,” Morris said during an on-court post-game interview. “They played a good game, but we got Game 1.”

Horford gave Morris more credit when asked if Boston needs that type of production out of the stretch-forward consistently.

“No question,” Horford replied. “He brings toughness to our group. He brings that grit and we fed off of that and the crowd fed off of it and it was great.”

Ahead of his playoff debut as a Celtic, Morris told the Boston Globe he thought outsiders might overlook the Eastern Conference’s No. 2 seed due to the absence of Irving and Hayward.

“I’m looking forward to proving everybody wrong,” Morris said before Boston took a 1-0 lead in the best-of-seven series. “Everybody is counting us out and that’s the main thing. This (is) about respect, and I feel we’re not getting any respect. We’re going to have to take it.”

“I’m going to go out there and continue to be me, continue to be a bulldog, help my team do whatever it takes to win,” Morris said. “If we play the right way, I think we’ve got a great shot at beating (Milwaukee).”

And if Morris keeps finding ways to get to the rim and making big plays in the clutch, Boston just might be able to reach the East finals for the second year in a row.

Morris takes it to the rack with the shot clock winding down! pic.twitter.com/MCwFZFyq97

Got to see Marcus have a fantastic finish to the Celtics first game. Marcus's play late in the 4th period might have saved the game but at least it got us into the overtime period.