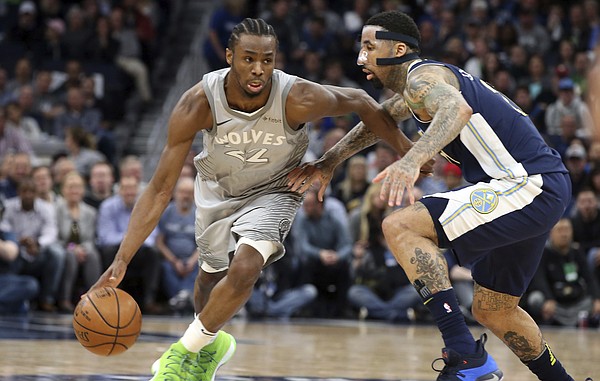 When Minnesota traded for Andrew Wiggins, the No. 1 overall draft pick in 2014, the franchise hadn’t reached the NBA Playoffs in a decade.

That postseason-less streak continued for three more years before Wiggins played a part in putting an end to if Wednesday night — on the last day of the regular season, and in overtime to boot.

In what amounted to a Western Conference play-in game for the final available spot, the Timberwolves edged Denver, 112-106, in Minneapolis.

It was still a one-possession game in the final 20 seconds of OT until Wiggins, the fourth-year small forward out of Kansas, drained a pair of clutch free throws with 14.6 seconds showing on the clock, pushing Minnesota’s lead to 110-106.

The 74.1-percent career free-throw shooter even managed to deliver after the Nuggets’ Will Barton paid him a visit at the charity stripe — no doubt reminding him about his 3-for-6 night at the line up to that point — just before the freebies.

Wiggins just smiled, laughed and proceeded to knock down both free throws.

Will Barton trying to ice Andrew Wiggins at the line? pic.twitter.com/JzPajO7iBi

“My man Wiggs hit the two biggest free throws of his career,” veteran all-star guard Jimmy Butler said in an on-court interview immediately after the Timberwolves sealed their playoff berth. “This was a team effort.”

None by x - Timberwolves

The two crucial foul shots came just more than a minute after Wiggins passed to Jeff Teague for a go-ahead jumper.

The 6-foot-8 wing known for his next-level athleticism, as well as often leaving observers wanting more, finished with 18 points, 5 rebounds, 3 assists and 3-for-5 3-point shooting in the victory that pushed Minnesota into the postseason for the first time since 2004.

It's crazy that he's statistically one of the worst defenders in the NBA.

When you've been coached by Bill Self and Tom Thibodeau and mentored by Jimmy Butler, the problem on defense isn't the coaching.

Makes my stomach turn with I watch him!! Jogs up and down 90% of trips. Catch and shoot guy with a athleticism that is still waiting to be unleashed.