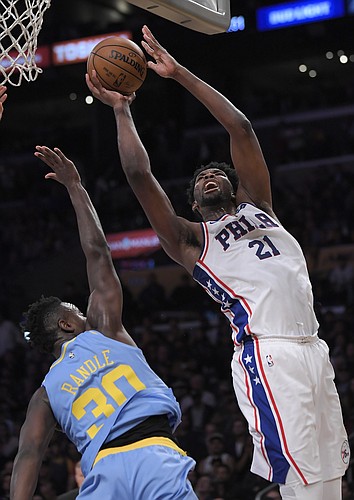 Joel Embiid once again reminded the NBA of his massive potential Wednesday night in Los Angeles, where Philadelphia’s 7-foot-2 phenom cooked the Lakers for a a career-best performance.

Still in just his second season out of Kansas, Embiid’s new personal bests of 46 points, seven assists, seven blocks, 14 made field goals, 16 made free throws and 19 free-throw attempts — the do-it-all center grabbed 15 rebounds, too — fueled a 115-109 road win for the Sixers, who improved to 8-6 on the season.

“I was just playing basketball basically,” Embiid told The Inquirer’s Keith Pompey. “They just kept throwing the ball to me in the post. And I kept finding new ways to score the ball and I went to the free-throw line. That’s where I was best at last year. I felt like today I did a great job.”

Added the confident 23-year-old: “And with me using different moves and attacking them, they didn’t really know what to do.”

Most teams fall into that category of getting lost trying to stop Embiid. According to Synergy Sports Technology, the multi-skilled big man, who also shot 2-for-3 from 3-point range versus the Lakers, is the league’s best post-up player. He averages 8.6 points a night on post-ups in a modern NBA moving away low-block one-on-ones as an offensive staple.

Joel Embiid has been the @NBA's most prolific post up scorer by a significant margin, here's a closer look at the league's top back to the basket threats, 4 of whom also make 1+ 3-pointer per game. pic.twitter.com/LtW2Tb9VFE

Per Synergy, Embiid shoots 60 percent when single-covered in the post.

“I did the same thing against the Clippers,” Philly’s biggest big said, referencing a 32-point, 16-rebound night two days earlier in which the man known most for missing games due to injuries and having his playing time restricted tallied a career-high 36 minutes. “I just wanted to come out and get down low and be a beast down there.”

Embiid, who had to spend the majority of his offseason resting and recovering from a knee injury said he still isn’t up to speed from a conditioning standpoint, and estimated he is at about 69 percent on that front a little more than a month into the season.

That’s a frightening idea for the rest of the league, considering what Embiid and likely Rookie of the Year Ben Simmons already are doing to teams.

“It’s just not us, you’ve got to put it on our teammates, too,” Embiid said, crediting Robert Covington and J.J. Redick, as well as coach Brett Brown and his staff.

The Sixers, so bad for so long throughout “The Process” that landed them Embiid, Simmons and currently injured No. 1 overall pick Markelle Fultz, have won seven of their last nine games.

“We still have a lot of work to do,” Embiid said.

The 23-year-old from Cameroon became the first NBA player with 40-plus points, seven-plus assists and seven-plus blocks in a game since another Sixers legend, Julius Erving, did it in 1982.

Embiid, averaging 23.0 points, 11.2 rebounds, 1.9 blocks and 51.6-percent shooting this year, in 29.0 minutes, has played in just 43 games over the course of the past two seasons after missing his first two seasons due to injuries.

His health remains the biggest “if” in the NBA. But if Embiid can put those devastating injuries that sideline him for months behind him (everyone knock on the closest piece of wood you can find), he looks to be on a trajectory to become one of the league’s most dominating players.

Way to go Joel! He's stays healthy he'll be the best big man in the NBA..

A Great Ambassador for Kansas too!

Waiting for the headline “Lonzo Ball and Joel Embiid combine for 48 points!”

Benton. Joel is in his third season out of Kansas not 2nd. Thanks for posting the article. Love hearing hawks in the NBA. what happened to the daily reports?

Actually he's in his 4th season out of KU. He sat out his first 2 years and then played a little bit last year before getting hurt.

As a huge 76ers' fan, all I can say is "watch out NBA" if Joel and Ben stay healthy. They are already one of the top duos in the NBA. Joel has been awesome all season, and it's great to see the Sixers lifted the minutes restriction. The next step is for the team to let him play in back-to-back contests...hopefully that will happen at some point this season.

It was awesome that the Lkers' game was on ESPN, because it let the rest of the country see why KU fans and Sixers' fans have been raving about him

Now that Paul Pierce has retired, it's great to see that KU now has again a big star in the NBA.

With all due respect to Wiggins and the Morris brothers and the dozen or so other Jayhawks in the pros, Joel's the Beast now.

So happy for Frank. Hopefully he continues to get minutes.