What are Joel Embiid's chances of making all-star team as rookie? 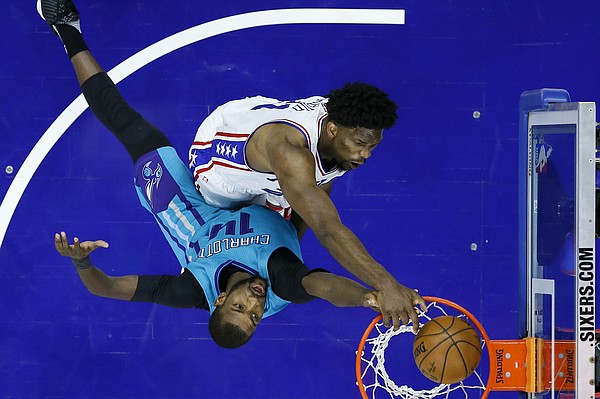 The more Joel Embiid plays, the more the NBA Rookie of the Year-in-waiting amazes the Philadelphia fan base and observers league-wide.

The former Kansas big man has scored 20 or more points in his previous nine starts — all while playing between 24 to 30 minutes of 48-minute-long games. Embiid even has led the Sixers, a long mocked franchise that averaged 15.7 wins a season the previous three years, to victories in six of the last seven games in which he’s played.

Since the beginning of January, Embiid is averaging 22.5 points, 9.2 rebounds, 2.5 blocks, while shooting 44.8% from the floor and 81.5% at the foul line and playing 27 minutes a game. The 22-year-old center seemingly improves by the week, and his season numbers of 19.7 points, 7.7 rebounds and 2.4 blocks per game, in black and white, look like those of one of the better big men in the Eastern Conference. But does the best rookie in the league actually deserve to play in the NBA All-Star Game?

Hundreds of thousands of NBA fans have answered that question in the affirmative. Voting for all-star starters closed Monday. The results won’t be announced until Thursday night on TNT’s NBA Tip-Off show (6 p.m. CT), but here’s what we do know: at last announced count, Embiid ranked fourth among East frontcourt players in fan votes. As of last week, the fans had LeBron James (1,066,147 votes), Giannis Antetokounmpo (963,110) and Kevin Love (473,328) as their East frontcourt starters. But Embiid wasn’t too far behind Love, with 457,300 votes — narrowing the margin between he and Love from the first vote count by 12,335.

Did Embiid do enough in the final week of the voting period to surpass Love and break into the top three?

We've had a fun ride ha.. This is the last day to vote so RETWEET this for the culture

Even if he did, that won’t automatically make him an all-star starter or guarantee him a roster spot for the Feb. 19 exhibition in New Orleans. Fan votes carry 50% of the weight in determining starting spots for the Eastern and Western conferences. The other 50% is split evenly between a select number of media who cover the NBA and the league’s current players.

Cleveland superstar James and Milwaukee’s rising star Antetokounmpo are virtual locks to start for the East. That third spot is up for grabs. It would be safe to guess many players and media would lean toward a vote for Love, Chicago’s Jimmy Butler, Indiana’s Paul George or New York Knicks Carmelo Anthony or Kristaps Porzingis before they would vote for Embiid. All are more established than the rookie phenom, and the Sixers, though improved, still have just a 13-26 record.

And then there’s the matter of how much — or relatively little — Embiid has played in his first season. The Sixers wisely have kept him out of one game on either end of back-to-back dates and restricted his minutes to around 28 a night. They already spent two years without Embiid impacting their on-court product due to injury, and they want to protect their investment until they’re confident he can handle a complete role.

ESPN’s Zach Lowe might have put it best on his Lowe Post podcast while discussing Embiid’s all-star case:

“I love watching Joel Embiid play. Love it. He’s unbelievable. If he stays healthy — knock on every piece of whatever material that is within arm’s length of you — he is going to be a superstar for a long time. He’s missed 10 games and he plays on a minutes restriction. He should not be in the All-Star Game.”

Already, Embiid has produced some almost unthinkable statistics for Philadelphia. Per Basketball-Reference, he’s averaging more points per 100 possessions in his first season than Michael Jordan did. As in No. 23. As in His Airness. As in The G.O.A.T.

Joel Embiid is averaging 38.5 points per 100 possessions, the most by a rookie since 1973-74, the first year that we can measure possessions pic.twitter.com/UraxVMSI3R

None by Basketball Reference

ESPN put out another telling stat regarding Embiid’s impact. He ranks second-best in NBA history in rookie points per 36 minutes (28.0), trailing only Kansas legend and hall of famer Wilt Chamberlain (29.2).

Only one rookie has EVER scored more points per minute than Joel Embiid is scoring this season 👀 pic.twitter.com/36StvhARHI

Those numbers hint at Embiid’s potential for longterm greatness. However, such examples might not matter to NBA media and players, who, as Lowe pointed out, will most likely take their all-star selections far more seriously than fans, because — right or wrong — sometimes after players’ careers are over their cases for the Hall of Fame can be tied to all-star appearances. So Embiid’s array of highlight blocks and dunks might not be enough to get him in as a starter.

If Embiid doesn’t crack the East’s starting five, he would have to secure one of the seven reserve spots, as chosen by the NBA’s coaches (results announced Jan. 26 on TNT). The same factors that will work against the rookie with players and media might hurt him even more with the coaches. Do enough of them respect Embiid as much as they do other more established players whom they’ve played against and game-planned to try and stop for longer?

Let’s say, as an example, the East starting five matches the latest fan-voting totals. The starters would be James, Antetokounmpo, Love, a third Cav in Kyrie Irving and first-year Chicago Bull Dwyane Wade. The way coaches vote for the all-star backups, they can take two guards, three frontcourt players and two wild cards. As mentioned earlier, Butler, Anthony, Porzingis and George would be Embiid’s competition for those frountcourt spots. And if the coaches prefer them, or perhaps even Milwaukee’s Jabari Parker, landing one of the final two spots could be difficult, too.

The number of all-star caliber guards in the East is greater than the number of available reserve spots for perimeter players. If Irving and Wade start, the coaches would still have Toronto’s DeMar DeRozan and Kyle Lowry, Boston’s Isaiah Thomas, Charlotte’s Kemba Walker and Washington’s John Wall from which to choose. It seems a fairly safe bet that four of those five will make it.

If Embiid isn’t a first-year all-star, he will still be a headliner in the Rising Stars Challenge (a showcase for first- and second-year players) at all-star weekend. And, let’s be honest, the way his game is progressing — or is that processing? — Embiid looks like a player who will be a no-brainer selection for years to come.

So why does minutes played and games played have anything to do with whether a person is a star and should be on the All Star team? Here I thought it had to do with who is best at their position. To the best of my knowledge, the annual All Star game is just one game. So it's not likely he'd be held out of a second game because there is no second game. And 28 minutes restriction is not a big deal, either, in an All Star game. Do any players play more than that in that game?

Jordan was great. Wilt was the GOAT.

actually this guy was the goat... https://en.wikipedia.org/wiki/Earl_Manigault

It matters because with rest a lot of players would put up bigger numbers. He probably is the most entertaining big man in the east but that's not the criteria.