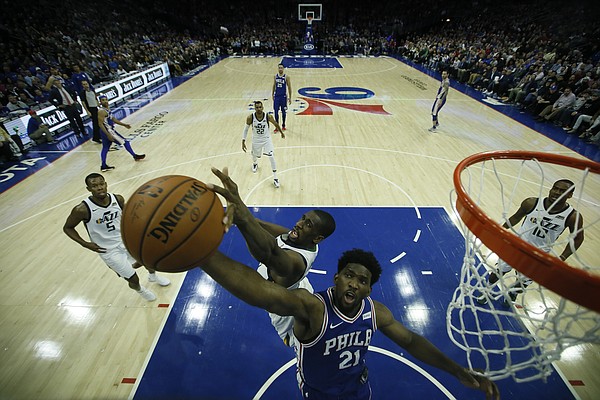 In some alternate reality where Joel Embiid wasn’t one of the more dangerous players in the NBA with the ball in his hands, the 7-foot-2 center from Cameroon would still be playing for Bill Self inside Allen Fieldhouse. Just ask him.

That idea seemed more realistic to Embiid when he arrived in Lawrence, in 2013, than his current existence. As the entertaining Philadelphia center detailed recently on The J.J. Redick Podcast for The Ringer (NSFW, so throw on some headphones), he played J.V. basketball during his junior year of high school, so a redshirt season at Kansas didn’t exactly fall into the category of absurd.

As we all know, though, Embiid’s basketball career arc instead took on an unthinkable path, making him a one-and-done big man who went No. 3 overall in the 2014 draft, far ahead of the 2017-18 KU basketball season, his would-be redshirt senior year.

Crazy as it may sound, the second-year pro who takes averages of 23.1 points, 11.3 rebounds, 3.1 assists and 1.7 blocks for the 76ers into Monday’s game against Phoenix, still doesn’t feel as though he has made it in the NBA — even though he looked like he belonged from his very first game.

“I get to the league. I miss two years. I lose my brother (Arthur, who died in 2014), so I go through a lot,” Embiid explained to Redick. “And when that time came for me to come back on the court and play my first game — I think my first game I played like 24 minutes — and, mind you, in college I wasn’t a scorer. I was just rebounding the ball, blocking shots, pretty good defensively, offensively regular hook shot, like typical big man.

“My first game I think I scored 20 points in 24 minutes (actually 22). And that’s when I figured out, ‘Hey, it’s easy.’ It’s not easy to thrive in the league or score in the league,” Embiid clarified. “And I was playing against Steven Adams, a big dude, like really good defensively.”

Embiid has teamed with rookie Ben Simmons to get formerly woeful Philadelphia out to a 13-9 start — Redick referred to both young players as Philly’s “superstars.” The big man whose career took off at Kansas said he has not yet in the NBA experienced a moment where he feels like he’s “really ----ing good, like top-five player in the league.”

However, there are certain times on the court when Embiid pulls off, say, a Hakeem Olajuwon-worthy “Dream shake,” and he thinks “Did I just do this?” The 23-year-old phenom said those instances inspire him.

None by Rob Perez

Redick asked his teammate why scoring a career-high 46 points a few weeks back against the Lakers didn’t make him feel as though he had arrived and whether it will take a championship to achieve that.

“I definitely want to win. I think everybody around me knows I’m competitive,” Embiid said, “and I play while I’m hurt, I play while I’m sick, I push myself just because I want to help the team win. The 46-point game, I wouldn’t consider that a big moment, because I didn’t feel like I was hot. I didn’t feel like I was just making shots all over the place. I was just playing basketball.”

The iso possessions, post-ups and “regular moves” Embiid pulled off that night, he explained, didn’t mean he was on fire.

“It wasn’t like I was Klay Thompson or Steph Curry.”

Embiid, of course, isn’t just known in the NBA for his incredible abilities or missing the first two seasons of his career due to injuries. Philadelphia’s outgoing big man also has turned into a social media king. Sometimes he even feels inspired to call out some opposing post player he just cooked on Twitter and/or Instagram.

“Usually I just want to go out there, have fun, play basketball and dominate. But guys usually have a tendency to have something against me, so they will be extra-physical or they will just like talking trash to me. And it just elevates my game even more and makes me want to dominate them,” Embiid said. “It makes me want to kick their ---. So I can go on social media later and basically talk ----.

“That’s what I did… It’s all fun. To me I’m just trying to have fun. But these guys, I guess, they get their feelings hurt and there’s nothing you can do about it,” Embiid added. “But at the end of the day it’s all fun and if you want to take it off the court and keep beefing that’s your problem.”

While centers such as Hassan Whiteside and Andre Drummond have fallen victim to Embiid’s on- and off-court exploits, the most infamous social media attack came against LaVar Ball, father of the Lakers’ rookie point guard Lonzo Ball, and notorious Big Baller Brand campaigner.

Embiid said he marked his calendar for the Sixers’ game at L.A., in which he went off for 46 points, 15 rebounds, seven assists and seven blocks, after LaVar Ball went on the radio in Philadelphia and criticized Embiid and the 76ers organization. The Sixers center said he’s actually “a big fan” of Lonzo Ball but was inspired for more obvious reasons.

“I couldn’t wait to play, just to show the Lakers fans and LaVar that I can actually play. I don’t think he was at the game, but I’m sure he saw that I could actually play,” Embiid said. “I just had to take a shot after the game and — not call him out, but basically have fun.”

As he likes to do, Embiid found a location on Instagram — Lavar, Fars, Iran — that referenced his prey after proving himself.

Redick had to ask his fun-loving teammate: is he a social media troll?

Please don't write these articles like CBS Sports. Your writing articles from quotes now. This is lazy journalism. This is to ruffle feathers and speculate about hypothetical situations. This is not reality.

I see it more as bringing news to us locals who perhaps didn't or wouldn't see it otherwise. There are plenty of other articles. I like these articles.

this was a difficult read. definitely bad journalism. i guess bring it to locals but it shouldn't be substituted for a real kansas ljworld article.

Any positive article about "The Process" is fine with me. The content is what is important. Delivery is a matter of style. Let's not sweat the small stuff.

Thanks for the article. The Instagram pic was hilarious. I wonder if Ball will blame his bad play on his ugly shoes?