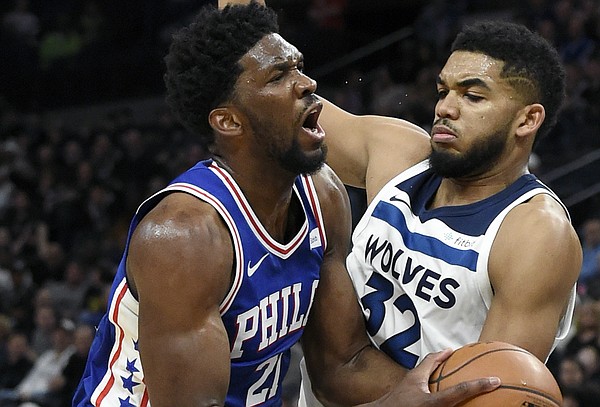 With so many Jayhwaks making a living in the NBA it’s not difficult on any given day to find a box score with a former Kansas basketball standout appearing for each team. But Tuesday night’s schedule provided a pair of reunions for one-time KU teammates who likely always will be tied together.

The brightest star associated with Kansas, Joel Embiid and his Sixers beat Andrew Wiggins’ Timberwolves in overtime, and one hard-nosed rookie picked up a win over another in Sacramento, where Frank Mason III’s Kings prevailed over Josh Jackson’s Suns.

Embiid’s greatness beamed down the stretch in Minneapolis, as he put up 28 points, 12 rebounds and a career-best 8 assists. Per ESPN, the last 76er center to hit those numbers in those categories was another famous Jayhawk, Wilt Chamberlain.

But Embiid’s individual production, he told ESPN’s Scott Van Pelt during a post-game interview, wasn’t what made him most proud about the night.

“We fought back,” Embiid said of a game that featured several lead changes in the fourth quarter, before Philadelphia won in OT, when Embiid scored the first basket of the extra period and later nailed a 3-pointer to extend the lead to seven. “We went down in the fourth and then we (faced) some adversity and we won the game.”

The Sixers, so often maligned the past several years for not competing with the rest of the league, improved to 14-13 on the year and 7-7 on the road.

“We’re getting better. We’ve got a lot of growing to do. We’ve been doing a better job, especially this year,” Embiid told Van Pelt, adding his first three seasons with the organization — two of which he missed with injuries — were tough to swallow. “To be in this type of position where we can actually go into the game and know that we have a chance to win and we’re going to win is always great.”

One wouldn’t have known it from Embiid’s near triple-double in a career-high 39 minutes, but some back soreness forced him to miss Philly’s two previous games — road losses at New Orleans and Cleveland — and he was a game-time decision against Minnesota.

“I missed the last two games and I don’t want to be that guy who’s always missing games,” said Embiid, who has played in 22 of 27 this year. “So I pushed through and we got the win. I’m excited to go back home and get some more wins.”

Though fourth-year forward Wiggins has proven far more durable than Embiid, he didn’t impact the game as much as his fellow Jayhawk this night. Wiggins shot 8-for-24 from the floor and 1-for-7 on 3-pointers, while scoring 20 points and grabbing seven boards.

His most impressive highlight came when he stole a bad Embiid pass and scored over the 7-foot-2 center.

The Timberwolves dropped to 16-12 but currently occupy the No. 4 slot in the Western Conference standings. Philly (14-13) is tied with Detroit and New York for the seventh-best record in the East. 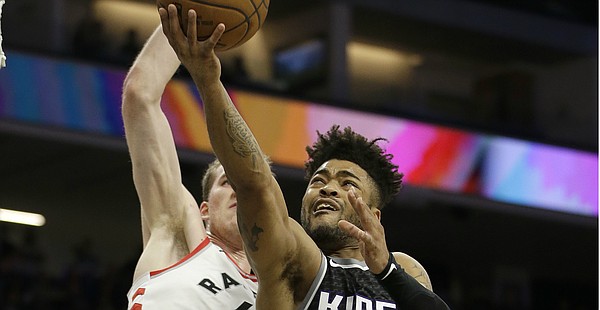 Unlike Embiid and Wiggins, neither Mason nor Jackson are likely to make their playoff debuts this season.

Mason only shot 2-for-8 and scored 6 points, but he also contributed 4 rebounds, 4 assists and even a blocked shot of Suns guard Tyler Ullis.

FM III towers over Tyler Ulis on this block 😂 pic.twitter.com/RPCXMAowkm

The rookie backup point guard’s plus/minus of +9 was the second-best in Sacramento’s box score, and he played the entire fourth quarter of the Kings’ win.

Jackson, meanwhile, had one of the worst shooting nights of his young career, going 3-for-14, while scoring 7 points and adding 5 boards and 2 assists in 30 minutes, in his seventh start.

Mason's impact is not surprising and would be far greater if given more opportunities to score. Mason should have a long career as a first-or-second-guy-off-the-bench type of player.

The only thing that will prevent Embiid from becoming a perennial all-star is his health and especially his back, which was noticeably bothering him last night. What a unique talent, who, unfortunately looks like will always be bothered by injury issues.

Wiggins just doesn't have the all-around game to make it to the next level of stardom. He'll probably be a 2 or 3-time all star over the course of his career unless he can become better at creating off the dribble and/or distributing for others.

Thanks for the update, mate! What a great feeling to be a Jayhawk! Embiid has helped Sixers transform to a fun team to watch. Wiggins is slowing down these past several games. But Mason is still tough as a brick. Josh looks good defensively.

I agree! The last time jayhawks in the NBA were this high profile was when PP was in his prime which is almost a lifetime away. It hurt when duke , UK, MSU all had players in the all star games and we always missed out. finally, this being able to hold my neck up high in pride is a great feeling although my neck is going to be sore tomorrow..haha

The Truth is a true sharp shooter. I was hoping Wiggs grow his balls to exceed what PP has achieved. Wiggs can be the next HOF from KU, if he wants to.

I like hearing about the 'hawks in the NBA. But what happened to your daily recap of ALL the guys who are playing now? That would be nice to see again.

I've never been interested in the NBA but it's pretty cool to be able to watch a game and have a former Jayhawk in it or at least on the team. I don't really have a fav NBA team but usually it's any team with a Jayhawk. Jayhawks head to head well it gets a little more complicated.

Crazy thing about that game, is seeing Joel Embiid next to Karl-Anthony Towns.....and Towns looks small....

Perhaps kusports would also write about future 'Hawks recruits. I found the following highlight of Grimes vs Jacob on youtube:

Looks like we're going to have fun watching Mason v2.0. Grimes is a baller, too.

Josh Jackson is having an awful rookie season. I've heard so many broadcasters and experts talk about how he isn't ready to play in the NBA. I know projected high lottery picks never pass up the $$$ to return to scholl, but he really could've used another season at KU.

Mason, on the other hand, has had little trouble adapting to the NBA, even though he's not shooting great, in part because he's finding it much harder to finish around the rim in the NBA than it was in college. But he rarely gets rattled, he runs the Kings' offense very well and he seems to have a positive impact in pretty much every game.

Embiid is awesome. And so much fun to watch. It's nice to see an NBA player who actually loves to play basketball. There are too many players who treat it as a way to make money and don't really seem to enjoy playing all that much. Joel does need to cut down on his turnovers and calm down a bit on defense (he picks up some silly fouls trying to make plays on shots he has no chance of blocking, for example). But if he can stay healthy, he will be a Top 10 player in the NBA sooner rather than later.

T-Wolves' fans seem a bit disenchanted with Andrew. His defense has improved a little bit, but his offensive numbers have dropped way off and he still plays too passively. The fans talk about how he's not really buying into Thibs' system and that he's just putting up empty stats. It'll be interesting to see if Minnesota tries to move him in the offseaon, although that huge extension might scare other teams away. Andrew has so much natural talent. It's disappointing that he hasn't become more of an all-around player...he's still basically just a high volume scorer.