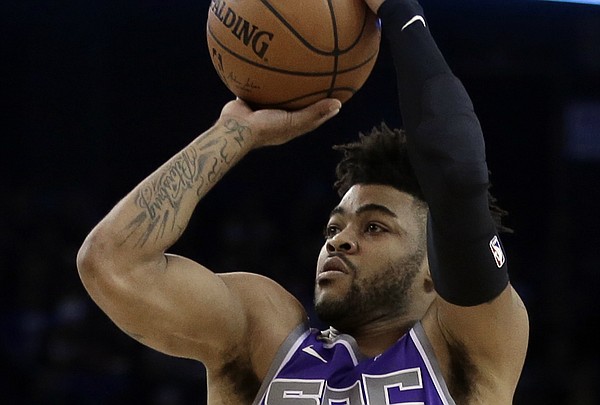 The days of DNP’s and watching NBA games exclusively from the bench may be over for former Kansas All-American Frank Mason III.

A rookie second-round pick for Sacramento, Mason has experienced an escalation in opportunity of late, playing 20-plus minutes in six of the Kings’ seven previous games.

Though the 23-year-old point guard has only appeared in 14 of 21 contests entering Friday’s game at Chicago, Sacramento coach Dave Joerger has made Mason a regular member of his rotation off the bench the past couple weeks — even going as far at times as to play Mason over the team’s No. 5 overall draft pick, De’Aaron Fox, late in games.

Joerger referred to Mason as a “stud muffin” earlier this week, and that was before the backup guard from KU scored a career-high 14 points and dished 4 assists in the Kings’ surprising road win over Golden State (without Kevin Druant and Steph Curry).

"He's tough and he picks guys up. He gets in the lane and he makes plays,” Joerger said of Mason. “He can shoot it a little bit. ... I'm a big fan of his, and I look forward to coaching him for a long time, hopefully."

9 of his 14 PTS came in the 4th Q.@FrankMason0 coming through in the clutch. pic.twitter.com/hVYbQLprJO

As pointed out by Colin Ward-Henninger of CBSSports.com, in the Kings’ six most recent games, Mason has a net rating of +23.6, compared to a -25.6 net rating for Fox.

It’s a far different role from the first few weeks of the season, when Mason didn’t even play a single second in seven of Sacramento’s first 12 games.

Mason recently told Jason Jones of The Sacramento Bee the early portion of his rookie year wasn’t too different from his freshman season at Kansas.

“I played 15 minutes a game, and I thought I should be starting as a freshman but Coach (Bill Self) thought different,” Mason remembered. “So I just played the role of coming off the bench and I think I was pretty good. Sophomore year I adjusted and started.”

Sooner or later, Fox will become the point guard Sacramento envisioned when the organization took the 6-3 19-year-old from Kentucky as a lottery pick this past June. In the meantime, Mason has a chance to not only gain experience but prove to the Kings he belongs on the court just as much as Fox will.

Sacramento (6-15) is in the very early stages of a youth movement overhaul centered around Fox, Willie Cauley-Stein, Skal Labissiere, Bogdan Bogdanovic and Buddy Hield. It’s easy to project Mason as a key cog within that group moving forward.

KU fans witnessed how Mason’s methodical dedication made him supremely more effective over the years. That’s not to say he’ll be an NBA all-star in a few seasons, but Mason seems too quick, too good a shooter and too determined to be passed over — just as he’s shown in the first month and a half of his professional career.

People should stop sleeping on Frank. He speaks volumes to how a polished 4 year college guy can be an effective NBA player much faster than a talented, young guy like Fox.

I'm not convinced that Frank can't be an elite NBA point guard. The consensus is Fox will just take time and will eventually be THE point guard of future. I wouldn't bet against Frank doing the same.

I've watched a few of his games, looks like he did at KU his senior year. So proud and happy for him.

This is great news. Frank deserves to be playing.

He is relentless. He will make the guys ahead of him bring it every night. They better not let up, because they will learn Frank won't.

"As pointed out by Colin Ward-Henninger of CBSSports.com, in the Kings’ six most recent games, Mason has a net rating of +23.6, compared to a -25.6 net rating for Fox."

Dang! Keep it up, Frank.

No surprise to the Jayhawk faithful. Frank is going to have a long, productive career. The story of Frank Mason just keeps getting better and better.

There's a "not" missing from this:

"and too determined to be passed over"

I've been watching a lot of Kings' games on my online NBA League Pass. Frank didn't have a good game last night, but overall, he's been playing well of late. It's clear the head coach trusts him.

Sacramento's 2nd unit, with Mason, Bogdanovic, Hield, Cauley-Stein and whoever (usually Koufos or Temple) has been outplaying the Kings' starters on a consistent basis. And Frank is a big reason for that.

I did a ranking point guards taken in the 2017 Draft the ohter day, using a point system that graded them on a bunch of different statistical categories for this season. Using that system, Donovan Mitchell was the only one who graded out better overall than Frank did. Now 20 games is a small sample size, but I think it shows that, at the very least, that Frank ican match up with all those other guys in terms of being a legit NBA player