'I gave every ounce I could': After 19 seasons, Paul Pierce retires 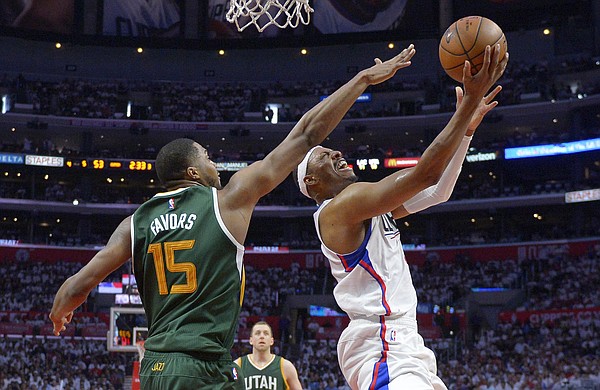 The career of the best NBA player from Kansas since Wilt Chamberlain officially has come to a close.

After 19 seasons, 1,343 regular-season games, 14 playoff appearances, 10 All-Star games, four All-NBA selections, a championship ring and a Finals MVP trophy, Paul Pierce walked away from the game on Sunday, with the Los Angeles Clippers’ season-ending playoff-loss sending him into retirement.

His revered veteran presence took him to Brooklyn, Washington and L.A., too, for the twilight years in the league, before it all finally ended in the first round of the 2017 playoffs, with a Game 7 defeat.

“You know, it’s tough to come up short in your goals. Each and every year you set a goal to be champions,” Pierce said in a post-game interview with reporters posted at CBSSports.com. “And it’s a tough pill to swallow each and every year. I’ve been in the league 19 years, so I’ve had to swallow 18 tough pills. But at the end of the day, I was happy to be a part of this, compete with these guys and see the work everybody put in every day, and I appreciate the guys around me,” he said, before shaking his head in apparent disbelief. “It’s been a fun ride.”

The season obviously ended sooner than Pierce and his Clippers teammates hoped, but the new retiree was able to put it all in perspective.

“I’m happy at the end of the day with what I’ve been able to accomplish, what I’ve been able to do throughout my career,” Pierce said, “and I gave every ounce I could. Each and every day. I have no regrets. Even to the last day I’m in here a couple hours before the game, you know, giving my blood, sweat and tears to this game.” 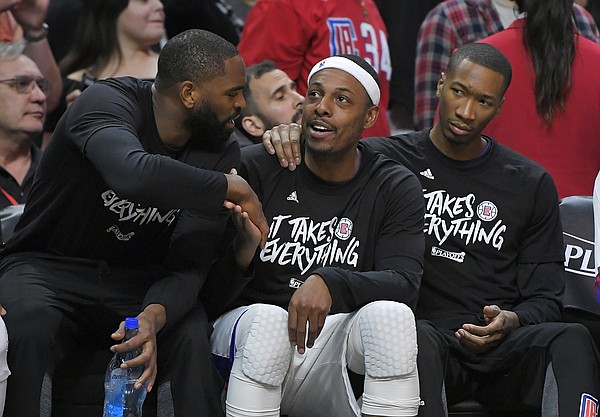 Los Angeles Clippers forward Paul Pierce, center, gets a handshake from Alan Anderson, left, and a pat on the back from Wesley Johnson during the closing seconds Game 7 of an NBA basketball first-round playoff series against the Utah Jazz, Sunday, April 30, 2017, in Los Angeles. Pierce is scheduled to retire after the season. (AP Photo/Mark J. Terrill)

After Pierce’s final NBA appearance, a number of former teammates and competitors showed their appreciation for his career with messages on social media.

Congrats on a hall of fame career @paulpierce34 #truth #HOF

None by Kobe Bryant

Congrats to The Truth @paulpierce34 on ONE hell of a career! #FutureHOF

Likewise, in a video produced by The Players’ Tribune, many of those same stars and contemporaries shared their thoughts on what made Pierce special over the course of his many highlight-filled, shot-making years in The Association. And his college days weren’t overlooked, either, thanks to the help of his coach at Kansas, Roy Williams.

“He was a wonderful player to coach,” Williams said. “He’s a complete player, and I think that competitiveness made him become a compete player.”

His longtime friend and Celtics running mate Kevin Garnett described Pierce both as a “beast” and a “classic” player.

“One of the more clutch, if not calmer, beasts that I’ve met in my life,” Garnett said.

A Tribute to Paul Pierce by The Players' Tribune

Between the regular season and playoffs since his professional debut in 1999, Pierce logged 47,873 minutes and scored 29,571 points. He retired as the 18th-leading scorer in NBA history (26,397 points).

“This game has meant everything for me,” Pierce said shortly after playing for the last time on Sunday. “And I’m happy from start to finish.” 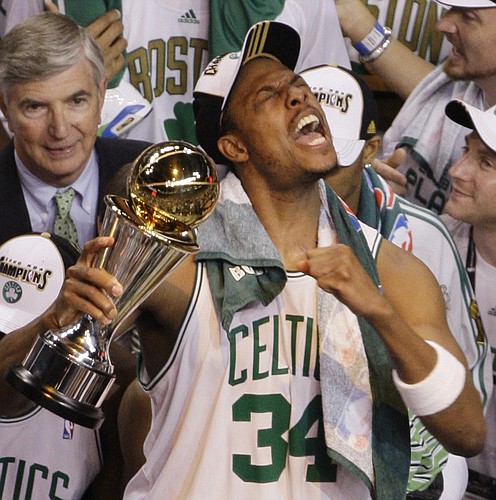 Paul Pierce: Through the Years as Boston Celtic by NBA

The Truth shall set you free!! Rock Chalk Paul, it's been a great run.

With all the highlights and joys created by Paul Pierce and the teams he played for, especially Kansas, sadly his enduring legacy, in my mind, is that horrible loss to UA in '97 (https://www.theplayerstribune.com/paul-pierce-kansas-ncaa-tournament-march-madness-one-bad-game).

Of all the horribly brutal season ending exits from the NCAA Tournament, that game and the UNC loss in '57 with Wilt are far and away the most memorable crushing games in the glorious KU Basketball history.

I just measured to make sure. My glass is half-full of Paul Pierce, the Kansas years.

I couldn't agree with you more. Both of those games hit me pretty hard. I had just moved from KUMC and my parting gift was a basketball signed by that '97 team, a ball signed by what I was certain would be the national champs. I moved to Galveston and had to go to Houston to watch the game with fellow Jayhawks; I was so shocked at the loss that on my way back to Galveston I was going over 90 miles and hour and didn't realize it. Even in Texas they pull you over for going that fast. Needless to say the cop was not sympathetic, giving me a ticket for not only speeding but for also having a Kansas license plate, I had only been down here two months, one would think he would give me a break, especially after my sob story about the loss. The '57 game was a radio broadcast for me and being much younger I was able to accept it easier than the '97 game but it too hurt.

Now that's a horrible/great story. I feel for you, buddy.

Geeezzz...that's kicking a guy when he's down to do that. Maybe the cop was a UT fan knowing Tom Penders was on the way out and Rick Barnes would be taking over.

Sad to think that the two most successful Kansas players in the NBA, Chamberlain and Pierce, both are best known for horrible NCAA tournament losses. At the time of the '57 championship game, we lived in the Plaza area and several in the neighborhood attended the game while the rest listened on the radio. Sadly, I was attending the game in Birmingham AL. Interesting thing about that is KU was put in the SE region. The MW regionals were in San Antonio played in the Alamodome. We were number 1 all year and the NCAA moved us out of our region...to play in that horrible town.

Congrats, Truth, on a great run!

At least he got a ring, they are tough to come by. OK Paul, time for the next chapter in your career...you made Jayhawk nation proud!

I think that after 20 years, I can let go of the '97 game. Yes, is was disheartening, but in the overall scheme of things, it's just life.

Was at the '57 game with my family as a young lad of 9, and I cried all the way home from that one. Forty years later, I had the pleasure of shaking Wilt's hand when he returned to KU. It was a chance meeting as we were leaving the field house. I turned around and there he was right in front of me. I thanked him for returning, and he shook my hand and patted my shoulder. Felt like a 9 year old again for a brief moment. If that had happened when I was 9, I probably wouldn't have washed my hand or shoulder for a week. Heaven forbid!

As for Paul, he, Wilt, Danny, and Jo Jo have been the most successful Jayhawks in the pros, although I am also old enough to remember that Clyde Lovellette had a pretty good pro career also. Andrew, Josh, et. al. have a lot to live up to, and even if they were only in Lawrence for a year, I will continue to follow their careers with much interest.

Just think though how close Paul's career came to an end early on when he was stabbed and probably nearly died. Thank God that didn't happen, as has represented himself and KU in glorious fashion throughout his long career in the NBA.

Congratulations, Paul, and all the best for the future.

I must have been so traumatized by the '97 game, i can't remember a thing about it. Could someone please refresh my memory? Thanks......I think!

Consider yourself blessed. You don't want to know.