Nick Collison not ready to retire just yet 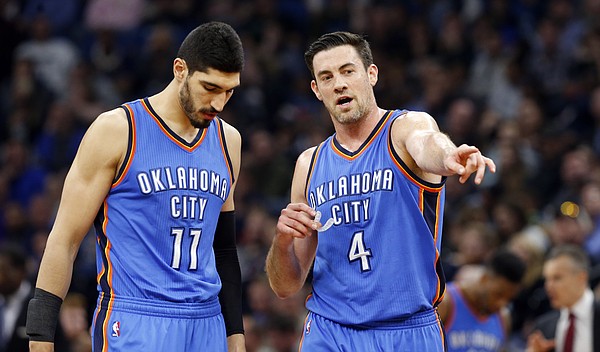 Oklahoma City Thunder's Enes Kanter, left, of Turkey, and Nick Collison confer during the second half of an NBA basketball game against the Minnesota Timberwolves Tuesday, April 11, 2017, in Minneapolis. (AP Photo/Jim Mone)

The former Kansas star said Wednesday, less than 24 hours removed from Oklahoma City’s first-round playoff loss to Houston, he doesn’t intend to retire — a scenario he previously said he at least would consider.

“I plan to play for sure. I wasn't sure going into the season how I would feel at the end of the year, but I still enjoy playing, and I enjoy being around the group. I enjoy being on the team, and I still think I have something to offer,” the 36-year-old post player said during exit interviews with Oklahoma media.

Now more of an unofficial assistant coach for the Thunder than a member of the rotation, Collison played in a career-low 20 games this season, leading to more uncharted small averages, such as 6.4 minutes, 1.7 points and 1.5 rebounds.

Every season as a rugged role player, Collison has suited up for the same organization, playing for the Seattle Super Sonics before the franchise relocated to OKC. His current deal expires this summer, but the veteran who mentors young bigs such as Steven Adams, Enes Kanter and Domantas Sabonis for the Thunder indicated he’d like to continue his run of loyalty with the franchise.

“I’ve been treated great here, and I've had great experiences here, and it's been the best basketball years of my life, for sure, playing here,” Collison said. “… There's no answers today. Everyone has been focusing on this season, these playoffs, and today is the first day we start thinking about what comes next.”

As much as the 6-foot-10 reserve has experienced in the NBA since being selected 12th overall in 2003, uncertainty isn’t exactly an area of expertise. Collision said he knew before high school he would play for Iowa Falls and knew before college he would play for the Jayhawks, but the only other time he didn’t know what would come next was when he graduated from Kansas and had no way of predicting which team would take him in the rookie draft.

“It's a little different,” he said of the coming offseason. “I think about it, but I've got really good relationships with all the people here, so I think it'll be honest and fair, and we'll just — I think both sides just have to find the best thing, and we'll figure it out.”

It won’t be too long before the big man’s playing days are completely through. Collison said he has considered what he will do as a young retiree, but didn’t dive into the specifics or whether he would transition into a coaching or front-office position of some sort.

“I think I said it last year, things change a lot in a short amount of time, and people's mindset, my mindset changes over time, so I think it's best to just look at it as what's the next thing,” Collison said, “and I think that's always helped me as a player, to just say what's the next thing, and I'm going to keep doing that.”

KU hasn't been the same without big-man coach Danny Manning. Not sure if Nick wants to coach instead of, instead of along with, playing, but maybe he could find a place at KU. I always like successful players coming back to help the next generation.

He was a coaches son, correct? It's possible he could take interest in the coaching profession, though with his career earnings as posted above, I wouldn't blame him if he found some much less stressful way to occupy his time.

It would be great to have Nick on the sideline. It would depend on if he would prefer the NBA over coaching college ball.

With 54 mil in the bank, I think I would coach fish on how to swim to my hook in the water! :}

I'd coach my golf ball how to land on the fairway, then the green, and finally how roll into the cup.

I know it's a little late to be adding a comment, but I just have to tip my hat to you Tony for the humor. You are extremely creative, so keep it up!