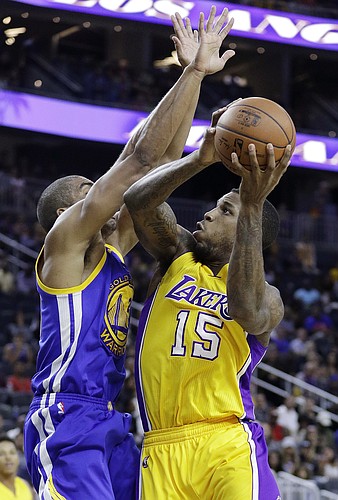 No stranger to adversity, Thomas Robinson might be in for a few of the most stressful days of his professional career.

A bonafide college basketball star by the time he finished up at Kansas in 2012, Robinson months later became the No. 5 overall pick in the NBA Draft. Since then, though, the tough-nosed, explosive power forward has yet to carve out a niche for himself.

As of Tuesday morning, Robinson could call himself a member of the Los Angeles Lakers. However, there is no guarantee that will be the case when the regular season starts next week.

The Lakers have 17 players on their preseason roster. As reported by Mark Medina of The Orange County Register, L.A. has to trim that number to at least 15 before embarking on the quickly approaching 82-game grind.

Robinson is one of three Lakers on non-guaranteed training camp deals, along with the artist formerly known as Ron Artest, aka Metta World Peace, and center Yi Jianlian.

None by Mike Bresnahan

First-year NBA head coach Luke Walton told The Register that Robinson, a free agent this past summer, impressed the Lakers in workouts.

“The way he was working and the way he was winning, we thought we at least have to bring this guy to camp,” Walton said. “He looks great out here.”

The coach seems to like him, so that’s a positive for the 6-foot-10 25-year-old. Still, Robinson hasn’t played much off L.A.’s bench in the preseason:

- Did not play vs. Portland

- Did not play vs. Sacramento

In total, Robinson has produced 16 points and 14 rebounds in 30 preseason minutes, which doesn’t look too bad if you forget about the 8.1 minutes a game part of the equation. According to RealGM.com, Robinson’s preseason PER is 27.61. This of course is from a minimal sample size, but just to provide a reference point only five NBA players had a PER of 27 or higher last season.

Also helping Robinson’s cause, The Register reported he often wins drills at Lakers practices, getting his name atop what they call the “winner’s board.”

“I’m just trying to be who I am as a player,” Robinson said. “Those are exactly the things coach said.”

Drafted by Sacramento, Robinson also has played for Houston, Portland, Philadelphia and Brooklyn. He hopes the 2016-17 season will be his fifth in the league for his seventh different franchise. He told The Register he learned quickly not to take personnel decisions the wrong way or look at teams that moved him or declined to retain him with any malice.

“It’s never been anything personal,” he said. “When you get older, things don’t bother you as much.”

Oddly enough, Robinson likely would have an easier time sticking with L.A. if not for the presence of another former Kansas big man, Tarik Black. The Lakers already have a backup big to crash the glass, play with energy and do other dirty work assignments in the paint. Black, who has played each of the past two seasons with the organization, is averaging 7.8 points and 4.8 rebounds in 16.2 minutes this preseason, while shooting 59.1% from the floor.

Between Black, Julius Randle, Luol Deng, Larry Nance Jr., Timofey Mozgov and even early second-round pick Ivica Zubac, the Lakers have a lot of front court options. Robinson would have to leapfrog at least one or two of those players, as well as Yi, for L.A. to keep him around.

It seems the little things have held Robinson back through his years in the NBA. Take this example of JaVale McGee dunking on Robinson earlier this week. The former KU star deserves credit for rising up and contesting the jam. But he wouldn’t have been in that position had he stayed in the middle of the paint in proper help position, denying McGee the easiest route to the hoop in the first place.

Obviously, no defender is perfect and it sounds as if Walton sees Robinson’s redeeming qualities.

“He never takes plays off,” the L.A. coach said. “He’s a great guy. You want him around. He’s a monster on the offensive glass and has a great attitude with everything we’ve done.”

The Lakers have two more preseason games left before they play for real Wednesday, Oct. 26. We’ll know by then if Robinson will spend the months ahead in purple and gold or be forced to try and catch on with yet another franchise.

I'd love to see T-Rob stick in the NBA a few more seasons but I'd hardly call it the 'most stressful days of his professional career.' T-Rob has now played in the NBA 4 seasons and has pocketed about about $17MM (http://celebrityglad.com/thomas-robinson-salary-net-worth-power-forward-of-portland-trail-blazers-nba-team/) with easily several more pro years to come, somewhere.

I've long been befuddled by T-Rob's relative struggle in the NBA. I never expected him to be an All-Star, but I thought his athleticism and ability to rebound would endear himself to some organization. I used to think it was just a matter of him finding the right team, but I'm afraid that doesn't seem so likely given the number of teams he's played for.

It's definitely a result of unfortunate circumstances. He's been excellent in limited minutes, but he's played for the absolute worst teams possible, with the exception of the Blazers, where it looked like he'd carved a niche for himself.

If he gets cut by the Lakers, I still expect him to find another landing spot. I personally wanted him to go to the Spurs or Thunder in this last FA period. Maybe it will still work out.