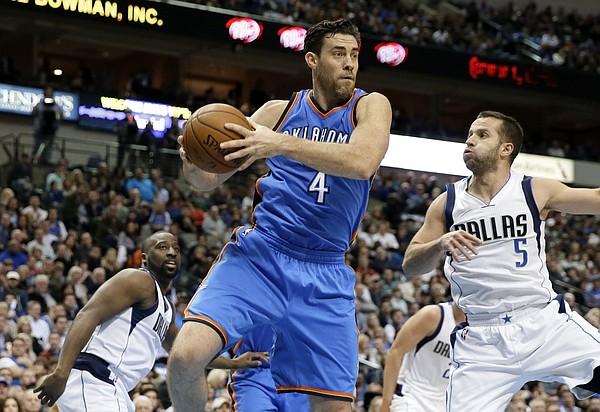 Most veterans fortunate enough to have played 12 NBA seasons have bounced around the league, worn an assortment of uniforms and called city after city their new hometown. Stability just doesn’t exist for them.

Former Kansas star Nick Collison hasn’t dealt with such turmoil. The 35-year-old power forward, whose Oklahoma City team is tied with defending champion Golden State, 1-1, in the Western Conference Finals, has played for the organization since he graduated from KU.

In fact, as pointed out in a Q&A with Collison posted on the National Basketball Players Association’s website about him being the “backbone” of the Thunder’s roster, the 6-foot-10 backup big man — drafted by Seattle in 2003, before the franchise relocated to Oklahoma City — is part of a very small group of longtime NBA players who have been with only one organization for at least that long. The others are Dallas’ Dirk Nowitzki, Miami’s Dwyane Wade and Udonis Haslem, and San Antonio’s Tim Duncan, Tony Parker and Manu Ginobili.

A backup veteran can’t be the face of the franchise. But Kevin Durant once called Collison “Mr. Thunder,” a title Collison doesn’t exactly consider his nickname.

“It’s more of almost a joke because I’ve been here so long,” Collison said. “It’s fun to be able to have a lot of shared history with those guys. We’ve got a lot of stories, a lot of inside jokes from all those years together. That’s another cool thing about it: getting to really build friendships with guys.”

Collison said in his NBPA interview he considers himself fortunate to have played with the Thunder (formerly the Sonics) his entire career.

“It’s been a place I’ve wanted to be and they’ve wanted to have me around. I feel like contractually it’s always worked out where we can come to a fair deal, and I’ve liked how I’ve been treated,” Collison said. “I never felt the need to go anywhere else and the way our team has grown, it’s been really fun to be a part of — to be with these guys for a long time when they were younger coming up and having success. And I know that’s really rare in the NBA, to be able to have that continuity and those teammates year after year, especially in today’s NBA with so much movement.”

No longer a player Thunder coach Billy Donovan turns to in crucial moments of a game, Collison still has value to the team just in the way he approaches his job. OKC general manager Sam Presti had that in mind when he signed the forward to a two-year extension last season. At the time, Presti cited Collison’s professionalism as a great example for the entire organization.

While Collison only has played 79 total minutes in the Thunder’s first 13 postseason games this year, it doesn’t change his approach.

“I think I want to always be like an authentic teammate — really try to do whatever I can to help guys out, help the team out,” Collison said in his NBPA interview. “It’s just the way that I’ve been taught to be part of a basketball team. And I think it’s helped me in my career being helpful, being a good teammate. It’s allowed me to last this long.”

Still, Collison shook off the notion that Thunder bigs Steven Adams, Serge Ibaka and Enes Kanter play well because of him.

The Thunder, led by stars Durant and Russell Westbrook, would have to beat a Golden State team that lost nine games the entire regular season three more times in order to reach the NBA Finals. Without addressing just how difficult that might be, Collison, who played for OKC in the 2012 Finals against Miami, said he sees some similarities in how this season has progressed for OKC, with the Thunder improving as the playoffs go on.

The core players who reached the championship round four years ago, Collison said, can still recall what worked during that run and feed off of that knowledge now.

“There’s a lot of guys who don’t have that experience, but when half the team can bring along the other guys, it really helps,” Collison explained. “Whereas in 2012, we did have some veteran guys, but the guys playing the majority of the minutes were there for the first time. And there’s just certain things that you have to go through.”

This is what happens when you play four years of solid basketball at KU. WTG Nick!