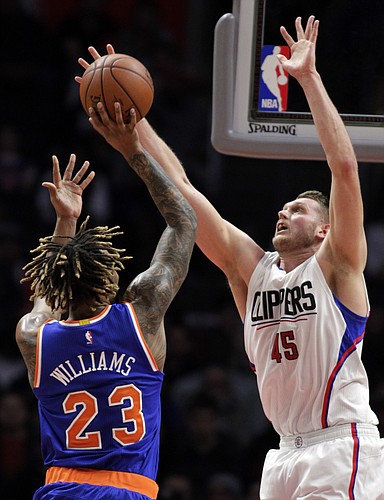 There never has been a better time to be an NBA free agent.

The league’s salary cap is jumping approximately $24 million dollars this summer, meaning all 30 teams will have room to sign available players to what most expect to be eye-popping and/or head-scratching contracts.

The hysteria officially begins at midnight Thursday for the big names such as Kevin Durant and Al Horford, as well as the league’s role players.

Even though the seven former Kansas players available won’t garner maximum contracts, all of them figure to be on the verge of signing the most lucrative deals of their careers.

Here’s a look at what’s ahead for those Jayhawks — other than constantly listening to Drake and Future’s “Big Rings” while rapping along, “What a time to be alive.”

After playing fewer than 400 total minutes in each of his first four seasons, Cole Aldrich began to carve out a niche for himself as a serviceable backup big man during the past couple of years.

“It just takes an opportunity, and my opportunity took four or five years in,” Aldrich said a few weeks back, while visiting Lawrence. “You get the right opportunity, and for me it was just continue to do what I do, and that was find a way to get better.”

Aldrich played so well in a reserve role for the Los Angeles Clippers this past season, in fact, that he thinks he’s entering the prime of his career, setting up a rather easy decision to opt out of the second year of his contract.

“You kind of look at the situation, and I had to take some time, and you think about what it is,” Aldrich said of leaving $1.2 million on the table to become a free agent, adding he knew the Clippers might have some cap space available to set up a return to L.A.

He is right about that. The Clippers have a little wiggle room thanks to the salary cap jump. But they don’t have as much room to operate as most teams, because more than $63 million of the franchise’s money is tied up in its big three of Chris Paul, Blake Griffin and DeAndre Jordan.

Should the Clippers keep all of their core in place and successfully bring in a role-playing free agent of note, they might have to part ways with the 6-foot-11 Aldrich if other teams are willing to reward him with a bigger contract. Aldrich played well enough in his one season with Los Angeles to prove he can rebound, defend the paint and finish, setting him up to fit in with any team in need of a second-unit center who eats up space.

L.A. even appears to have a safety net of sorts in place in case it can’t keep Aldrich, by drafting Maryland center Diamond Stone in the second round.

According to L.A. Times reporter Brad Turner the Clippers are interested in bringing Aldrich back, and Orlando and Phoenix have expressed interest, too.

Center Cole Aldrich not only will have interest from Clippers to return, but Orlando and Phoenix have expressed interested, source.

None by Brad Turner

The way Aldrich talked, it sounded like he might prefer to stay with the Clippers. But the NBA is a business, so there is no guarantee it will play out in that fashion. 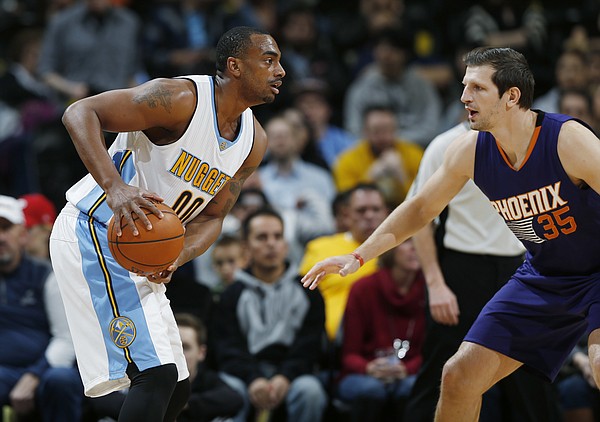 A steady veteran forward who does what coaches ask of him and has added some 3-point shooting to his repertoire, Darrell Arthur, like Aldrich, opted out of the second year of his deal.

Moving on from Denver could be a course of action for the 6-foot-9 forward, who has only played for Memphis and the Nuggets since leaving Kansas early as a national champion.

Denver has plenty of cap space to re-sign Arthur if it wants. But if Arthur desires an increased role and a change of scenery, he could leave behind a crowded Nuggets frontcourt that includes Danilo Gallinari, Kenneth Faried, Wilson Chandler, Jusuf Nurkic and Nikola Jokic.

Arthur’s reputation will keep him employed in the NBA. Where that happens is up to him. As reported earlier this week, Washington is interested in him as a backup to fellow former KU forward Markieff Morris. 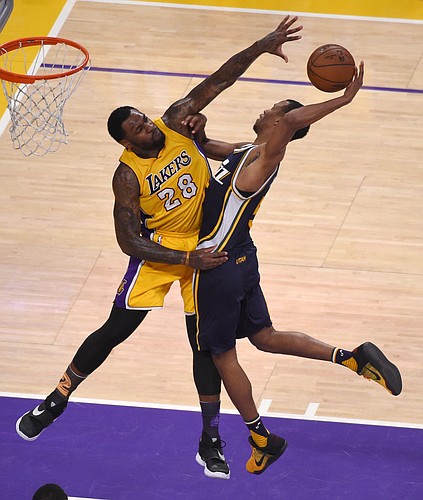 Tarik Black serves as a nice reminder to recent KU draft snubs Perry Ellis, Wayne Selden Jr. and Brannen Greene that entering the league as an undrafted free agent can work out in the long run.

The 6-foot-9 post player proved in two years ago in summer league Houston should keep him around. Even when the Rockets waived him during his rookie season in order to go after a veteran, the Los Angeles Lakers quickly claimed him and added Black to their inexperienced core.

However, the fact that L.A. only played Black 12.7 minutes a game during the 2015-16 season makes one wonder how interested the organization is in bringing him back. If the Lakers are married to the idea of keeping him around, they can match any other team’s offer, because Black is a restricted free agent (unlike the rest of the former KU players on this list).

The good news for Black is the Lakers have just two post players under contract for next year: Julius Randle and Larry Nance Jr. If the once dominant franchise whiffs in free agency on more established big men, re-signing a hard-working, familiar face might appeal. Conversely, should L.A. spend an absurd amount of money on more alluring names, the team might need to bring back Black on an affordable contract to complete the roster.

The real question is: Do other teams value Black as a potential big man? 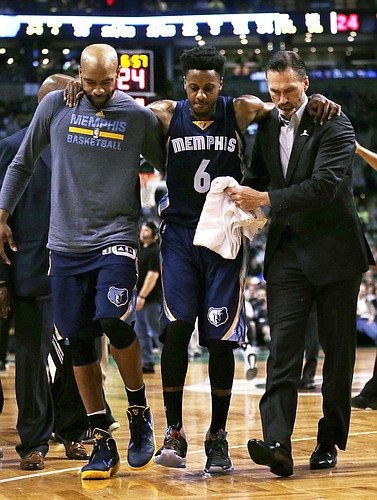 Memphis Grizzlies guard Mario Chalmers (6) is helped from the court after injuring his right leg during the third quarter of an NBA basketball game against the Boston Celtics in Boston, Wednesday, March 9, 2016. (AP Photo/Charles Krupa)

Had Mario Chalmers made it through his eighth NBA season unscathed, he would be the most attractive KU free agent this summer by far. And even while recovering from a ruptured right Achilles tendon, Chalmers could still draw the most interest.

Teams will want to take their time and have their medical staffs make sure vitality still exists in the 6-foot-2 veteran’s knee before OK-ing a deal for Chalmers, but the way he played in Memphis prior to the injury setback will keep him as an intriguing choice for organizations in need of a backup guard who can shoot and distribute.

In his 55 games for the Grizzlies, following a trade from Miami, Chalmers thrived as a sixth man coming off the bench to put up points. Throw in his defensive ability and championship experience while playing with LeBron James, Dwyane Wade and Chris Bosh in Miami, and you quickly realize how coveted Chalmers would be to a playoff team in search of backcourt assistance.

Chalmers recently said in an interview he is two weeks ahead of schedule with his knee rehab, and the hope is he would be back at 100 percent before the regular season begins. 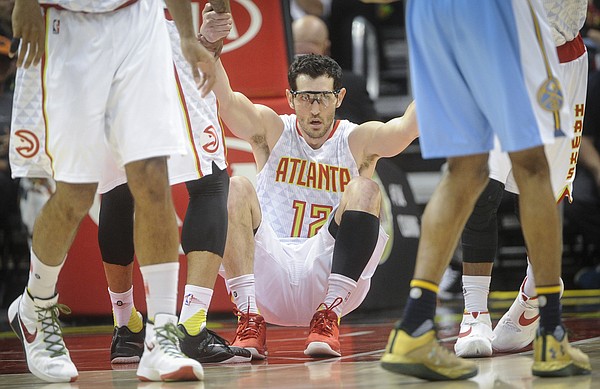 Atlanta Hawks guard Kirk Hinrich (12) is helped up after taking a charge against the Denver Nuggets during an NBA basketball game, Thursday, March 17, 2016, in Atlanta. Atlanta won 116-98.(AP Photo/John Amis)

As Hinrich began to find out early this past season with Chicago, there simply isn’t much demand for the veteran guard anymore, in terms of minutes. That notion later became reenforced for Hinrich upon arriving via trade in Atlanta.

The longtime Bull only appeared in 11 of a possible 26 games with the Hawks to close the regular season, averaging a paltry 0.5 points, 1.1 rebounds and 1.3 assists in 6.9 minutes.

Those numbers make one wonder about Hinrich’s future in the league. But there will be roster spots to fill in the months ahead for a number of teams. Though 35 and nearly done as an on-court contributor, some organization might find value in having him around the locker room to guide young players and almost serve as a player/assistant coach.

Former Chicago coach Tom Thibodeau seemed to love Hinrich in Chicago. Could they join up again in Minnesota, with Hinrich helping to bring along youngsters Kris Dunn, Zach LaVine and Andrew Wiggins? 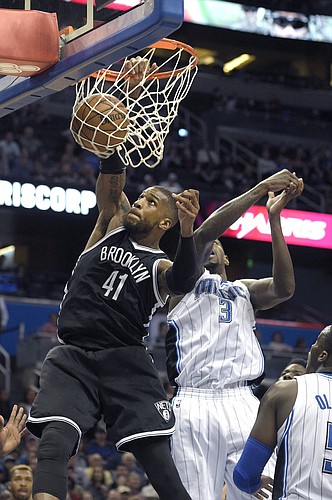 The No. 5 overall pick in the 2012 draft, Thomas Robinson still hasn’t made his mark in the NBA. A star at KU, Robinson has turned into a nomad backup power forward. So far, the explosive, 6-foot-10 big has played for Sacramento, Houston, Portland, Philadelphia and Brooklyn.

In all likelihood, Robinson will add a sixth team to that list this summer, after opting out of his contract with the Nets. At 25, one would assume his best years in the league are still ahead of him. And Robinson does bring a valuable skill to the floor, to go with his athleticism and energy. The guy competes on the glass.

Robinson didn’t log enough minutes with Brooklyn to qualify as a league leader in such categories, but his defensive and offensive rebound percentages are up there with the best bigs on the planet. He grabbed 27.8% of available defensive boards this past season, which would have ranked him 10th in the NBA had he played more. Even better, Robinson secured 16.4% of possible offensive boards. Oklahoma City’s Enes Kanter led the league in that category, at 16.7%.

It seems any team in need of a high-energy rebounder would have to consider Robinson. 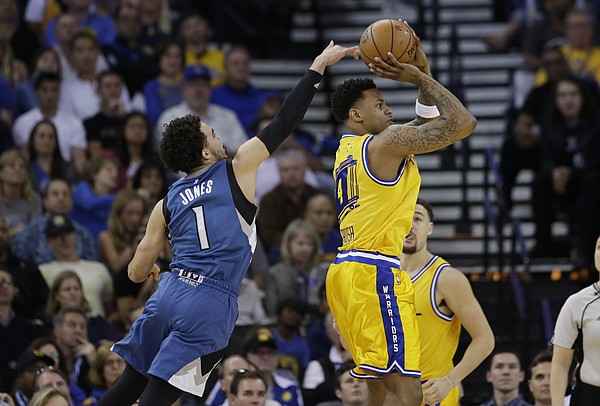 Back-to-back NBA Finals appearances, a championship ring and a role on the record-breaking 73-win Warriors. Life has been pretty good for Brandon Rush the past couple of years.

Now Rush’s contract is up, and the free agency hullabaloo in the days ahead could determine his place going forward with the defending Western Conference champs. Golden State values defensive versatility and Rush definitely gives the team that as a backup. But if the Warriors return all of their core perimeter players — Steph Curry, Klay Thompson, Andre Iguodala, Shawn Livingston and Harrison Barnes — would they really need Rush?

Rush proved this season, while starting 25 games, he can fill in and mesh well. In December, Rush averaged a season-high 20.3 minutes and put up 5.5 points, 3.4 rebounds and 1.1 assists while knocking down 40.5% of his 3-point attempts.

By no means is he a game-changer, but he isn’t going to shoot your team in the foot, either. Whether it’s with the Warriors or another franchise, Rush figures to find a spot as a veteran role player.

Actually, many of these guys are not going to command the most lucrative contracts of their careers. If Kirk Hinrich doesn't retire, he's likely going to get a veteran minimum contract.Back in 2006-07, he got an extension that was worth more than $10 million dollars per year -- THAT was the most lucrative deal of his career. Likewise, Mario Chalmers isn't likely to get as big of a contract as his last one -- he's coming off tearing his Achilles tendon, which will probably have teams wary about giving him a long or a big $$$ deal. Brandon Rush is another guy looking at a vet minimum type of deal. Tarik Black is another guy looking at a minimum deal. T-Rob might get a small raise, but he's a journeyman who ha been a huge disappointment. I'm sure someone will sign him, but he isn't likely to get offered a big money deal

Honestly, out of these 7 guys, only Aldrich and maybe Darrell Arthur are likely to get a significant raise over what they made this past season. Now if Andrew Wiggins was a free agent this offseason, he's probably be looking at a max $$$ deal.

Good luck to all these guys. Regardless of what kind of contracts they get, I hope they land in a good spot for them in terms of fit and potential playing time

Let's check back when all the deals are done and see what happens. There's a lot of money to be spent this summer.