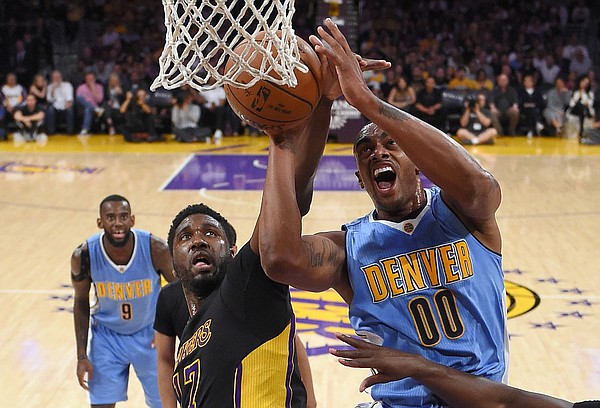 It’s not often that the name Darrell Arthur comes up in the buzz surrounding the NBA, but with the season over, the draft complete and free agency revving up at the end of the week, rumors regarding Arthur’s future began swirling Monday.

A few days after reports of the former Kansas forward opting out of the second year of his contract with Denver in order to hit the open market, word out of the nation’s capital is Washington could be a destination for the 6-foot-9 veteran who won a national championship with KU in 2008.

According to a report from CSNAtlantic.com, Arthur is on a “short list” of targets for the Wizards, when teams can start negotiating with free agents on July 1.

Arthur averaged 7.5 points and 4.2 rebounds in 21.7 minutes a game — mostly as a reserve — this past season with the Nuggets, during his third year with the franchise. While his numbers don’t blow you away, Arthur is respected around the league for his work ethic and ability to defend pick-and-roll action as a 6-foot-9 frontcourt player.

What’s more, Arthur hit a career-high 38.5% of his 3-pointers during his seventh season in the league, making 45 shots from downtown, easily beating his previous season-best of 26 3-pointers.

Besides his valuable skills, which likely on their own merit could’ve earned him more than the $2.9 million he just left on the table for next season, the NBA salary cap is rising significantly this summer. Any player in his right mind would opt out of his contract now if he could, because pay raises will be readily available.

If Arthur were to reach a deal with the Wizards, he’d likely serve as a backup at power forward to another Jayhawk, Markieff Morris.

Of course, it might not work out that way. Most teams looking for a backup power forward, likely would have interest in a 4 who can stretch the floor and move his feet well while defending — inside and out — in the half court.

Arthur’s name certainly won’t be the biggest one on the market this summer, but he is an important role player to watch amid the free agency frenzy.

Glad to see the NBA is getting a raise. They so deserve it. Break out the sarcasm. Makes more in one season than most will in a lifetime. Someone making $80,000 per year would work 36 years to make one years salary for a reserve NBA player. Just baffling. I know these guys make money but getting a raise is a joke.

I just balance that out with the thought of who would be getting the money if not the players - the owners? Like they deserve more. The coaches? Perhaps, but if anyone's going to get the money, and the money rolls in, I'd rather the players who make the game what it is get the money instead of the owners. The owners already get plenty.

No Tim not a all. It's just baffling to me that the average Joe can't afford to go to a game. From the price of a ticket to beer and a dog at the concession stand. I do get what you're saying. I guess the flip side of that is that the owners take a lot of risk with these players year in and out as well. Money they spend or waste on draft picks that don't pan out. One could also argue in favor of the players. Either way they're all overpaid. It's funny we jump up and down today about income inequality but people in the movie industry or sports are some of the ones that are making that top 1% income. Just doesn't seem right. I donno. I guess this just caught me on a bad day. Thinking my salary has only gone up a very small percentage in 10 years when these guys are seeing 6 figure raises.

No, they're making exactly what the market dictates they can make. If we didn't watch and attend games, they wouldn't make nearly as much - it's completely TV driven. This is why the majority of MLS players make less than 100K/year, even though most every MLS stadium is packed for games; the TV ratings are bad, so the TV money isn't very high.

And if your avatar is an indication of what you do for a career, I wouldn't cry too much over your salary when pharmacists routinely start their careers making 100K.

Oh yes. And yet the contract above is more than I'll make in my career. Good comparison. I also spent 6 years in college and spent nearly $150,000 in loans to get that degree. Yes in the era we speak about the importance of education we seem to devalue it when compared to an athlete. Great argument.